A revisit of Lock, Stock And Two Smoking Barrels suggests maybe we were wrong about Guy Ritchie 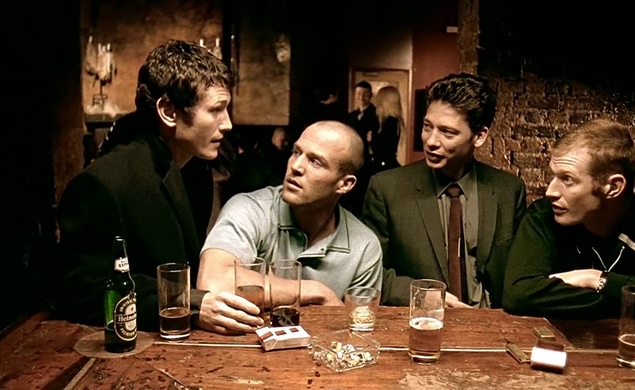 Welcome to another installment that doubles as a popular, or at least ubiquitous, sub-feature here at Nathan Rabin Vs. The IMDb 250, one I’ve taken to calling “Nathan Was Wrong.” Normally this takes the form of me shaking my head at the hubris of the teenaged me thinking all those accolades Network received for being prescient were unearned and that only I, as an adolescent cynic parroting the views of my favorite critics, could see the film for the shrill, overwritten melodrama it really was. Or me looking back with shame at my earlier opinion that The Silence Of The Lambs was a hacky exercise in transphobia.

Usually I come around on movies already considered masterpieces, but this time my opinion has traveled in the opposite direction, shifting from fanboy adoration to boredom. When I first saw Guy Ritchie’s 1998 cult favorite Lock, Stock And Two Smoking Barrels as college student after a few drinks at the bar back in Madison, Wisconsin, I had a blast. I felt like I had finally found a worthy creative heir to Quentin Tarantino. Even if the elements were groaningly familiar (violence, drugs, profanity, dark humor, executions as deadpan punchlines), delivering them with a British accent made a hell of a difference.

In the following years, I considered Lock, Stock And Two Smoking Barrels the gold standard against which all Ritchie’s subsequent work would be measured, and found myself wanting, in part because they all essentially attempted to remake Ritchie’s initial success, at least once with a Kabbalah twist. Re-watching Lock, Stock And Two Smoking Barrels as a 38-year-old husband and father, I found the film difficult to distinguish from all of the self-satisfied, slang-heavy Guy Ritchie-directed ensemble crime comedy filled with a rogue’s gallery of thugs, stoners, and random ne’er do wells that came after it.

Lock, Stock And Two Smoking Barrels focuses on a quartet of friends looking to make a big score in the sleazy underground: Eddy (Nick Moran), Soap (Dexter Fletcher), Tom (Jason Flemyng), and Bacon (Jason Statham, in the performance that made him an international star). The film’s first act is largely devoted to these pals (essentially Statham and three other blokes) raising enough money so that Eddy, who is apparently a gambling genius of some sort, can enter a high-stakes poker game held by a sex-shop proprietor named Hatchet Harry (P.H. Moriarty) (albeit not one with a snake tattoo on his face.) When Eddy, whose reputation as a brilliant cardsmith may have been overrated, loses big, he ends up owing a fortune to Harry, who does not take kindly to people owing him money.

Like the films of Tarantino, Lock, Stock And Two Smoking Barrels is obsessed with the vulgar folklore of the criminal element. Ritchie is enamored of storytelling, conversation, and tough-guy posturing. The difference is that the stories shared here reek of puerile adolescent attitude, like the would-be badass account of how Harry once beat a man to death with a 15-inch black dildo. If the image of a man being beaten to death with a comically oversized instrument generally used for sexual pleasure reduces you to giggling fits, then congratulations, you are a 15-year-old boy (at least emotionally) and the film’s target demographic.

Once the gambling scheme goes wrong, these four enterprising scumbuckets instead decide to rob a group of pot dealers whose barely conscious demeanors belie the enormous amount of money their business takes in. The problem is that seemingly every colorful aggregation of criminals decides to rob the pot dealers as well. Throw in antique weaponry worth a small fortune in its own right, and you have enough sordid doings to support 120 overwritten, overplotted minutes of bloody machinations.

It’s hard to overstate how little I cared for Lock, Stock And Two Smoking Barrels this time around. I don’t recall laughing a single time. Not only did it not seem like the next step in the Tarantino revolution, it didn’t even seem like a particularly good Tarantino knock-off. Statham is always fun, but Lock, Stock And Two Smoking Barrels makes the mistake of crowding him out with 27 other characters with just as much screen time but only a modicum of his charisma. When I first saw Lock, Stock And Two Smoking Barrels it struck me as pure fun. Rewatching it 17 years later, I would like to downgrade that estimation to “no fun.” And remarkably, Snatch lurks even higher up on the IMDb Top 250 rankings. Since Ritchie seemed content to make the same movie over and over again before Sherlock Holmes reignited his career, it seems unfair that I’ll need to write a whole new essay on a film I half-remember as exactly like Lock, Stock, only not as good.