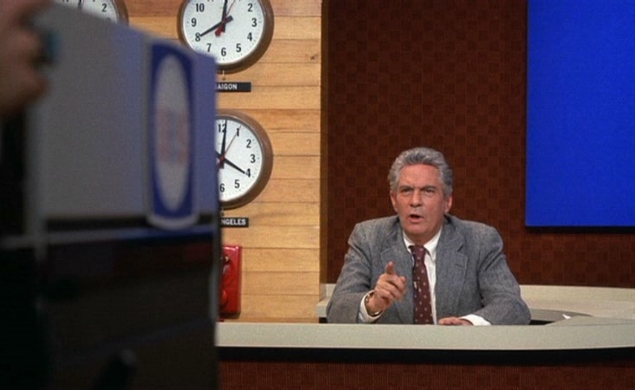 But I also find “overrated” useful, even a necessary evil of sorts, because there are many cases in which the cultural consensus is wrong and a movie that is mediocre or actively bad gets praised or hyped out of proportion to its merits. What I do not want is this project to become is a compendium of 250 movies everybody thinks are so great that so totally are not, a weekly dismissal of the middlebrow and overrated, even if many of the films on the list fall into that category. (I’m looking at you, Forrest Gump, ostensible 14th greatest film ever made).

If you had asked me for my opinion on Network a year ago, I would have described it as horrifically overrated. I would have called it shrill, melodramatic, overwritten, smug, and borderline racist and sexist. I would have described it as the didactic work of a bitter old man railing against a world that had passed him by and a counterculture he did not understand but felt bottomless contempt toward. I would have called the film’s observations on the money-lust of television obvious and overwrought. I had even covered the film for a feature at The A.V. Club called “Classic movies it’s okay to hate.”

It’s not that I was wrong in my beliefs, necessarily. It was my truth at the time. But as a 38-year-old, my take on the film is decidedly different.

Part of this change is attributable to reading Dave Itzkoff’s fantastic book about the making of Network, Mad As Hell. It’s hard to spend 300 pages inside the mind of Network screenwriter Paddy Chayefsky (the film’s true auteur, by all accounts) without empathizing with the man and his view of the world. Mad As Hell makes it clear that the film represented its author in his purest form.

Part of my newfound appreciation for Network is attributable to identifying more and more with Chayefsky and the characters who articulate his thoughts and philosophy in intricately worded monologues. I found myself relating strongly with both Peter Finch’s mad newsman Howard Beale and William Holden’s old-school executive Max Schumacher, men whose sense of ethics and how human beings should behave were forged in the values of an earlier age, and who face the present with trembling anxiety and the future with unrelenting dread. They’re men out of time, gentlemen in a vulgar and depraved age that doesn’t seem like it can get any worse, yet somehow manages to decline with each passing day.

The film’s plot finds the struggling, failing network UBS trying to survive by transforming Beale, a deeply depressed alcoholic who threatens to commit suicide on air, from a journalist into a public prophet and the star of The Howard Beale Show, a variety program that provides him a forum to rage against the inveterate ugliness and corruption of the world. Beale turns against the influence of Arab money in broadcasting, but after a sit-down with Arthur Jensen (Ned Beatty) in which Jensen puts the fear of God in Beale by explaining money as the true force that rules the world, he begins preaching Jensen’s capitalist gospel in ways that depress an audience that wants to be agitated and engaged, but not dispirited.

The show is the brainchild of Diana Christensen (Faye Dunaway), a women with a Nielsen meter for a soul who pursues her professional goals with a single-minded obsessiveness that could easily pass for madness. As Schumacher scolds her, she is “television incarnate, indifferent to suffering, insensitive to joy.” I previously found the characterization of Christensen as a cold, conniving, careerist shrew sexist, but this time I saw Christensen less as a representation of the female sex than as television personified. (Though she embodies the warped values and fundamental emptiness of the Internet just as vividly.) On that level, Dunaway’s performance is a marvel, as ferociously committed and intense as her career-destroying turn in Mommie Dearest.

And what I previously saw as the angry ramblings of a bitter old man railing against a world that had passed him by felt more like righteous anger this time around. No, anger doesn’t do justice to the film’s tone: It’s more like Old Testament fury delivered from high atop a mountain, a mesmerizing two-hour sermon on the bottomless emptiness of a world that makes everything secondary to the insatiable, corrosive demands of commerce. Network is an outrageous lie that told the truth, and has never stopped feeling timely and incendiary. But that righteous fury is joined to a profound sadness that the world is an infernal cesspool and there is nothing good people can do to change that.

Network has no score and no music cues, but the overall feel of the film is musical, even operatic. Finch and Ned Beatty’s epic monologues are like endless drum solos that leave audiences exhausted and exhilarated in equal measure, and the film builds to a crashing crescendo. It’s a film of astonishing vividness and power, most notably the famous scene where Beale, in fit of madness that has no claims to righteousness, commands his audience to go to their windows and scream, “I’m mad as hell, and I’m not going to take this anymore!” in the middle of a pounding rainstorm that echoes the storm within Beale’s tormented, fractured mind.

The roar of thunder and the many-voiced howl of a city screaming with incoherent rage: That is the mad, magnificent music of Network.

1. Network
2. Pirates Of The Caribbean: The Curse Of The Black Pearl
3. Slumdog Millionaire