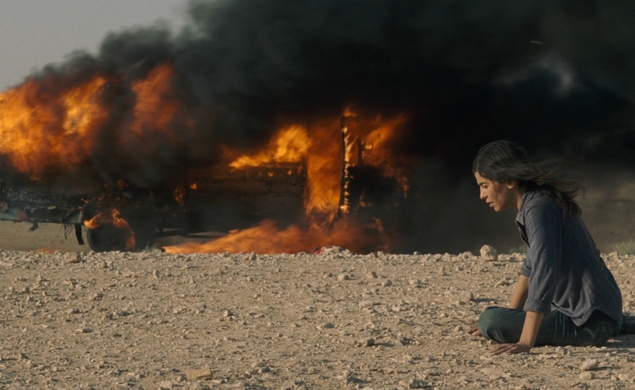 For the first time in this project, the random number generator led to a film I hadn’t even heard of, let alone seen, Denis Villeneuve’s 2010 melodrama Incendies, a film so breathtakingly cinematic I was surprised to learn it’s adapted from a play by Wajdi Mouawad. The film isn’t exactly unknown: It made The New York Times’ top 10 list for cinema in 2011, and Villeneuve’s next film, 2013’s Prisoners, was a box-office hit (grossing over $100 million worldwide) and generated lots of Oscar talk, though it was ultimately only nominated for Roger Deakins’ cinematography.

Incendies has a hell of a grabby premise: A pair of twins, Simon (Maxim Gaudette) and Jeanne (Melissa Desormeaux-Poulin), who wear the scars of unhappy childhoods well into adulthood, are summoned by the executor of their recently deceased mother Nawal (Lubna Azabal) and informed that she refuses to be buried until they track down a brother they never knew existed, as well as their biological father.

Simon is enraged. To him, family is a curse rather than a blessing, and the prospect of more relatives fills him with unease. He furthermore resents that his deeply troubled, complicated mother has left him not just a dark, enigmatic birthright, but also a mission that’s half international scavenger hunt, half shadowy mystery.

But Jeanne is more game, and she flies to unnamed Middle-Eastern country to try to track down clues about her lost family. The film then alternates between Jeanne’s search for her lost relatives and flashbacks to Nawal’s life before she had children, when she found herself in the middle of both a vicious civil war and a terrible skirmish with her family after they shunned her for getting pregnant out of wedlock and took away her baby. That’s only the beginning of Nawal’s troubles, as she narrowly escapes death in a world where the killing of women and children is an everyday occurrence.

As that summary undoubtedly conveys, Incendies is almost unbearably grim. It isn’t just devoid of anything resembling levity or humor; it seems to exist in a world that’s an unrelenting cavalcade of bloodshed and brutality. It’s a film of somber, hushed intensity, full of vivid imagery and unforgettable scenes like Nawal finally making it to the orphanage where her son has been tucked away, only to discover it has been bombed into nothingness.

In every parent-child bond lies a potent mystery. This is particularly true of Simon and Jeanne, who know only that their mother was remote, troubled, and ferociously imperfect, an excellent secretary but a less-than-excellent mother. It’s not just that Narwal doesn’t share the story of the harrowing gauntlet of horrors that preceded their birth; she can’t share these things, for risk of passing down her trauma and pain onto her children. It is only in death that she can reveal the full scope of her despair and brokenness, and even then in an almost perversely indirect form, by presenting their origins as the final piece of a puzzle.

In that respect, the central quest in Incendies is less to locate a father and half-brother than a journey for Simon and Jeanne to finally understand their mother, and in the process, to finally know themselves. Incendies is a gorgeously filmed, impeccably acted melodrama that proudly broadcasts its seriousness and solemnity. It’s dour and portentous, a moody, bleak exploration of the ways the sins and transgressions of the past inevitably inform our present and future. I suspect that’s a big part of the reason it ranks so high on the IMDb Top 250, despite its relative obscurity. It feels like an important film and a great film, even if it’s ultimately just really good.

Nathan’s Revised IMDb Top 250 Ratings (based on films covered for this series so far)
1. In The Mood For Love
2. Network
3. Incendies
4. Pirates Of The Caribbean: The Curse Of The Black Pearl
5. Slumdog Millionaire