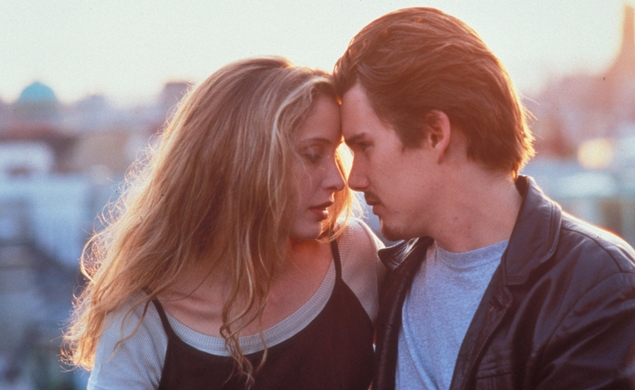 Richard Linklater’s intimate 1995 film Before Sunset opens with Celine, a young woman played by Julie Delpy, leaving her seat on a European train to avoid an increasingly loud, heated, untranslated argument between the middle-aged German couple next to her. The couple’s fight is a catalyst for her to move from her increasingly uncomfortable perch to one alongside fellow passenger Jesse (Ethan Hawke), a young man who shares her love for books and train travel and her radiant youth, if nothing else. At the time this deliberately modest, small-scale film was made, no one could have imagined—not even Linklater himself—that decades later this beautiful little standalone film would become part of an ambitious series, and that Jesse and Celine would someday become a middle-aged couple locked in what appears to be an endless series of arguments.

With the benefit of hindsight, it’s as if Jesse and Celine begin the film with an uhappy but fairly accurate glimpse into their future. Yet at the time, the middle-aged couple’s argument was merely a tool to get these two attractive strangers to talk to each other. From the beginning, their talk has the rarified air of flirting, of people trying to impress one another by being the most fascinating, most verbose, most charismatic version of themselves they can possibly be.

The conversation begins with Jesse asking Celine if she was able to understand what the German couple was fighting about. She says she did not, because her German is weak, but then immediately launches into the kind of heady, philosophical, fundamentally melancholy idea that Linklater loves. She asks Jesse if he has heard that as they get older, couples lose the ability to hear each other. It’s not a mere matter of communicating less effectively: They literally lose their ability to physically hear what the other person is saying. On one level, Celine is merely making conversation with a handsome stranger as a way to pass the time. But on another she’s imprinting on him the idea of them as a couple. She’s putting that energy out in the air, if only to gauge his interest and his response. From there, these continental strangers, he from the United States and she from France, are off and running. She’s a student at The Sorbonne; he’s doing the glamorous, romantic post-graduate thing, making the kinds of memories he’ll savor when he’s an old man who can only dream about automatically attracting the romantic interest of a beautiful French stranger on a train. He’s in the self-indulgent process of finding himself, but at least he’s cognizant he’s in that oft-insufferable stage.

The dialogue is often meta. Before Sunrise takes place mostly in real time, covering the first evening, night, and morning of a new couple’s relationship, and one of the first ideas Jesse proposes in an attempt to impress/seduce (the two tend to go hand in hand) his new companion is a television show that would also be filmed in real time and follow a man 24 hours a day, 365 days a year to uncover, in his words, “the poetry of everyday life.” (In later years this idea would be known alternately as “reality television” and The Truman Show.)

As with so many of Linklater’s films, ideas are the currency the leads exchange. They’re at an age when ideas are everywhere and irresistible, when few things are fixed and everything radiates potential. They’re primed for romance because they’re already in love with being young and aimless, and in love with the idea of falling in love. Their lives are wide open. They can be anyone and anything they set their mind to, but Jesse in particular isn’t in a hurry to figure out who he is. The dialogue is stylized and writerly because that’s how people talk when they’re flirting.

They’re each playing a role that bears a fairly close relationship to their true selves: Jesse is the spiritual seeker on an aimless but important-seeming quest who is forever caught between cynicism and idealism; Celine the romantic, philosophical continental object of desire. A natural endpoint for their relationship presents itself, but the immediately lovestruck Jesse makes a bold play: He asks Celine to jump ahead 10 or 20 years in time—in other word, the time when the sequels, 2004’s Before Sunrise and 2013’s Before Midnight were released—and imagine herself married and bored and contemplating the many men who have drifted in and out of her life, himself included. Didn’t she owe it to her future self to see if this strange, romantic figure might have been the one? Or did she want to doom herself to a life of always wondering if the American with the douche-y soul patch/wispy mustache/goatee combination was, in fact, the one and not some other man she’d end up with?

This gets Celine off the train and they begin a ramble through Vienna that doubles as their unofficial first date. They meet strange people, like a pair of actors in a curious-sounding play. There are the occasional awkward silences that ensue when people who do not know each other find themselves trying desperately to keep the conversation going. Sex and love enters into the equation early as a topic of conversation as well as the persistent exhilarating friction between these two people falling quickly into something at least resembling infatuation.

Before Sunrise captures the simultaneously intoxicating and scary process of flirting at its highest level. It conveys how exciting it is to see yourself reflected in the new and adoring and curious eyes of a potential new lover, or even soulmate. Delpy and Hawke are particularly adept at the body language of young courtship, at illustrating that sense that they must maintain eye contact at all times or that fragile, delicate connection will be lost while at the same it can be hard to even look at someone else when your mind is swimming with more feelings than you know how to process or even deal with.

As always, Linklater is brilliant at capturing the poignant, ephemeral beauty of youth, the heightened emotions of adolescence that get coarsened into the dull pragmatism of adulthood, with its dreary responsibilities and dull routines. The genius of the Before Sunrise series is that it’s defied convention to continue what would have been a more or less perfect discrete story to get to the painful and uncomfortable and even boring and maddening parts of being a couple for life, not just for one magical night.

Re-watching Before Sunise, it’s remarkable how many of the elements of the series’ later entries are introduced at the very beginning. It’s as if Linklater was playing an extremely long game whose contours and scope only he could envision. Neither Jesse nor Celine want the night to end, but no one could have envisioned just how long this beautifully rendered, would-be one-night-stand would last.