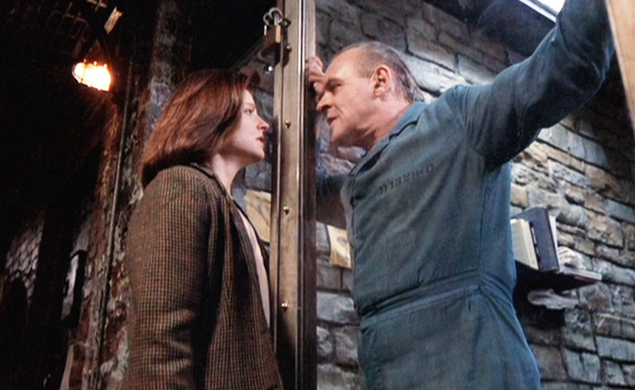 Welcome to the subsection of Nathan Rabin Vs. The IMDb Top 250 I like to think of as “Nathan Rabin Vs. The Wrongness Of His Snotty Youthful Judgments.” In these entries I look back at the opinions I formed as a snobby teenaged cinephile blowhard and shake my head with regret at my previous hubris and stubborn wrongheadedness. In this instance, the youthful opinion I have come to regret was my contention that The Silence Of The Lambs was woefully overrated, hammy, and not much of a movie, all things considered. I based this opinion partially on my teenaged opinion that the film was, at best, clueless, and at worst actively homophobic and transphobic in its depiction of a serial killer who murders overweight women so that he can build a skin suit out of their hides in an attempt to escape his infernal male identity.

This frustration was strengthened by the dearth of positive depictions of homosexual or transgender people in pop culture at the time, and the fact that the two of the most prominent queer figures in film at the time—Silence Of The Lambs’ Buffalo Bill and Basic Instinct’s Catherine Trammell—were serial killers. So if you were a queer kid in the early 1990s and were looking for representations of yourself onscreen in mainstream films, odds were good the reflection looking back at you was quite possibly insane, murderous, filled with self-hatred, or pathetic and broken in some way. From the vantage point of today, however, The Silence Of The Lambs looks a lot less like a referendum on alternate forms of sexuality and a whole lot more like a white-knuckle thriller in the Alfred Hitchcock mold that just happens to have a male villain who literally wants to inhabit the skin of a woman.

My other objection to The Silence Of The Lambs was based on Anthony Hopkins’ performance, which I saw as little but a hammy collection of actorly tics: never blinking for maximum intensity, delivering all of his lines in an effete yet sinister aristocratic hiss, and generally being way more cartoonish and over-the-top than Brian Cox in the same role in Michael Mann’s Manhunter, which I considered to be far superior to The Silence Of The Lambs. As a teenaged creative snob, I was totally miffed that people went crazy for this super-popular mainstream movie when there was a more obscure counterpart I thought was totally way better.

Re-watching the film, I found myself thinking that its success, creatively and commercially, was less dependent on Hopkins, who won the Academy Award for his performance, than on Jodie Foster’s brilliant performance as Clarice Starling and her oil-and-water chemistry with Hopkins. Director Jonathan Demme, in a sharp break from movies like Melvin And Howard and Something Wild, but a return of sorts to the women-in-peril exploitation movies he began his career with, shoots Foster in ways that continually highlight her vulnerability and isolation.

Clarice is a stubborn, headstrong, and brilliant woman of modest means in a community of arrogant, sexist, and domineering men. She’s often the only woman in any given scene (it’s telling that the only other female agent she interacts with regularly is black, and played by future filmmaker Kasi Lemmons), and her mental toughness in pursuing a career in the FBI and matching wits and going head-to-head with a nemesis like Hannibal Lecter is boldly undercut by the barely masked undercurrent of fear and trepidation in her voice and her unimposing physicality. She’s one of the all-time great heroes of contemporary film, not because she’s fearless, but because she is clearly gripped with fear and self-doubt constantly, yet soldiers on all the same.

In that respect, Demme makes brilliant use of Foster’s defining feature as an actress: outer toughness hiding a soft, scared core. The imbalance of power between Lecter—who considers himself the intellectual superior of everyone he meets, and possibly everyone in the world, and is probably right—and Clarice is highlighted by the fact that Clarice is still in FBI training when she meets Lecter. Lecter is like the world’s most twisted professor and Clarice, for all her outer armor, is still a student—and in many respects, his student.

Starling’s boss Jack Crawford (Scott Glenn) wagers that sending an attractive, smart, vulnerable woman instead of a cocky male agents might intrigue Lecter enough to break through his sneering, mocking exterior and get him to cooperate in helping the FBI unearth the identity of Buffalo Bill. As played by Ted Levine in what is, for better or worse, a career-defining performance—it’s hard to get cast in the lead in a Nicholas Sparks adaptation when the whole world knows you as Buffalo Bill—Buffalo Bill is a loner who kidnaps chubby women, then starves them so he can sew together their skin into a suit he can wear.

Lecter is such a formidable menace that even in the most extravagant and over-the-top of restraints, he nevertheless represents a deadly danger to even the biggest tough guys (including Russ Meyer favorite Charles Napier). But his real danger lies in his ability to get inside the minds of everyone he encounters. Foster is brilliant in modulating just how much she exposes of herself to win Lecter’s trust and cooperation without exposing enough of herself to become his target.

One of the brilliant aspects of constantly highlighting Clarice’s solitude—the sense that she is separated from everyone else around her not just by gender but also by class, personality, and breeding—is that it makes Lecter seems like her only real friend and ally by default. Lecter may be a cannibal and somewhat of an unpleasant person, but he also respects Clarice enough to open up to her in a way that he never would a male FBI agent, and only part of that is attributable to his inveterate need to manipulate and toy with people. There’s an epic game of cat and mouse at play here, to be sure, but underneath Lecter’s cruel words lies an underlying admiration for Clarice’s intellect and resilience.

Hopkins’ most famous role became a victim of success. Lecter became such an instantly iconic character and the subject of spoofs both micro (he was a regular target on The Critics) and macro (the little-loved feature-length parody The Silence Of The Hams) that he quickly became a campy figure of fun. But re-watching the film, the performance feels fresh and sly, the work of a man clearly enjoying himself but also a more measured and nuanced turn than I had previously given Hopkins credit for.

There is a reason Silence Of The Lambs became a huge hit and a multiple Oscar-winner: It’s terrifying in its craftsmanship and overarching chilliness but it’s also a fascinating dual character study of two strikingly different people with a surprising amount in common. Hopkins would return to the character, always for enormous paychecks, but Foster’s absence from follow-ups Hannibal, Red Dragon, and Hannibal Rising are a big part of what kept them from reaching the heights of Lambs. Hopkins may be a great villain, but he benefited from his explosive chemistry with a great heroine who made Lambs, then left the seemingly deathless franchise (it currently continues as a well-liked television show) at the right time.