The liberating vulgarity of Billy Wilder's Some Like It Hot 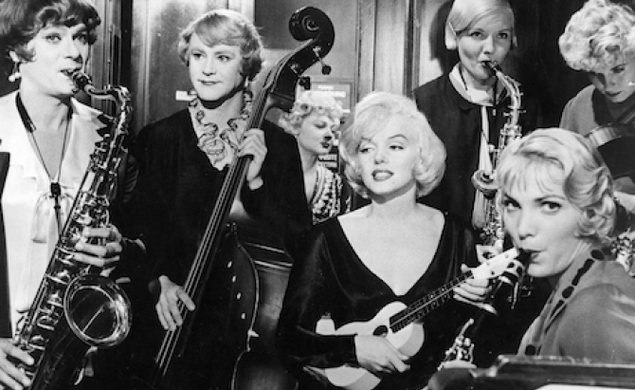 Before today, I would never have ranked Some Like It Hot among my favorite Billy Wilder movies. Heck, I’m not even sure I would have ranked it among my top 10 favorite Wilder movies. Part of this is attributable to my snobbish aversion to cross-dressing humor, which has to rank somewhere among puns, prop comedy, sound effects (sorry, Michael Winslow), and flatulence-based ribaldry in my personal hierarchy of humor, despite the rarified places Some Like It Hot and Tootsie (and Monty Python and Kids In The Hall, for that matter) hold in the comedy canon. I think I also held the film’s popularity against it as well. As a proper film snob, I preferred crowd-alienating Wilder masterpieces like Ace In The Hole and One, Two, Three to the crowd-pleasing wackiness of Some Like It Hot, which regularly scores high on those pandering AFI lists.

One of the joys of this project has been discovering just how wrong I have been in my previous judgments, and I am pleased to announce that I have wildly underrated Some Like It Hot in the past. It really does live up to its reputation as an utter blast, a high-spirited, gloriously vulgar, lowbrow romp wonderfully unencumbered by even the foggiest notion of good taste.

From the vantage point of 2015, it’s remarkable that Wilder was able to get away with making a film so transcendently smutty in 1959. But if you’re smart enough you can get away with just about anything, and human beings don’t come much smarter than Wilder and his co-screenwriter, I.A.L. Diamond. The gleefully transgressive farce casts the never-better Jack Lemmon and Tony Curtis as Jerry and Joe, respectively, a pair of struggling musicians who, in a fit of desperation, decide to impersonate women and join the all-female band Sweet Sue And Her Society Syncopators in order to evade the mob (or, as they’re alternately known in the film, “Friends Of Italian Opera”) after witnessing the 1929 St. Valentine’s Day Massacre.

Joe, a rakish womanizer and gambler who has left a trail of broken hearts in his wake, understandably falls into a deep state of lust with Sugar Kane Kowalczyk (Marilyn Monroe), the band’s sexy lead singer. In just about any other movie, Sugar would be the trashy supporting character whose feverish sexual advances the male romantic lead rejects for a pure-hearted heroine. Sugar drinks too much (in the age of Prohibition, no less), is promiscuous to the point of nymphomania, is an unabashed gold-digger intent on marrying a millionaire, and isn’t terribly bright. Yet Some Like It Hot never judges her, any more than it judges Jerry for becoming an unlikely gold-digger himself when rich, horny old goat Osgood Fielding III (Joe E. Brown) falls madly for him in the guise of his cross-dressing alter-ego Daphne, and promises to make him/her a very rich man/woman after they get hitched. Nor does it judge Joe for pretending to be the bespectacled, sexually frigid heir to the Shell Oil fortune (with a preposterous Cary Grant accent) in an attempt to trick the hilariously gullible Sugar into falling for him and his faux-fortune.

It’s reductive to call Some Like It Hot a cross-dressing comedy when it really contains pretty much every different form of comedy: deadpan, slapstick, cerebral, verbal, in-jokes, sex, farce, physical, highbrow, lowbrow, middlebrow, and everything in between. As long as it’s funny, it’s fair game for Wilder and a perfectly chosen cast. The film is so overflowing with double entendres (another form of humor generally not discussed with great reverence) that even lines that aren’t dirty feel dirty, just as the never-sexier Monroe has a rare gift here for wearing costumes that make her seem naked even when she’s fully clothed.

Like so much of Wilder’s work, Some Like It Hot is both bracingly contemporary and ahead of its time, in large part because it embraces a notion of gender and sexual fluidity that’s unusual even in the films of today. It’s the rare sex comedy that genuinely seems to love sex and boasts no hang-ups about it whatsoever. Gay, straight, cross-dressing, gold-digging, promiscuous—Some Like It Hot doesn’t seem to care where its characters fall on the spectrum, embracing the complexities and perversities of human sexuality. It’s no wonder the film was condemned by the Catholic Legion Of Decency, a moralistic scolding Wilder must have viewed as the ultimate badge of honor. History had the final judgment, however, and Some Like It Hot remains as radically funny and forward-thinking today as it must have been over a half-century ago.