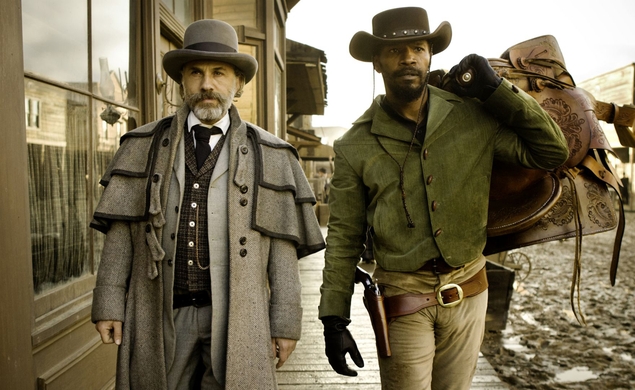 Despite getting older, I similarly remember having an overwhelmed response to 2012’s Django Unchained, IMDb users’ consensus pick for the 54th best film ever made. I wasn’t just excited and entertained by Django Unchained. I felt amped up, invigorated, like I wanted to start a bar fight somewhere just so I would have an outlet for all the energy I had after being riled up by Tarantino’s crowd-pleaser.

I did not start a bar fight, of course. (Now I would rather watch The Bachelor at home with my wife and baby than go to a bar.) I am so not that guy that I was a little concerned at how worked up I got about Django Unchained. It felt unseemly to derive such visceral pleasure from one of the defining tragedies of our nation’s development. Yet I would be a liar if I told you that Django Unchained didn’t bring out the 16-year-old-boy in me. Three years later, I still haven’t unpacked all of my feelings about the film. Django Unchained is, like Inglourious Basterds before it, a revenge movie on behalf of an entire people. One of the things that makes Unchained problematic is that it is not a people Tarantino belongs to on anything other than a symbolic level. I have no doubt that Tarantino identifies strongly with blacks and Jews under the period of their peak persecution as well as all underdogs everywhere, but at the end of the day he is a white non-Jew (and not even the Australian he so distractingly plays here).

Part of what excited me about Django Unchained is that, like almost all of Tarantino’s movies, it is on some level a meditation on storytelling. In that respect, the Tarantino figure here is Dr. King Schultz (Christophe Waltz, in his second Oscar-winning performance in a Tarantino film). Like the man who created him, Schultz is a man of words. He loves talk for its own sake. He is in love with the sound of his own mellifluous voice, but his flowery, almost comically formal language serves another purpose as well. Schultz’s high-flown manners mask that he is an outlaw in dangerous country, a man who detests slavery on a bone-deep level who makes his living in the hostile country of the Antebellum American South by manipulating men of lesser intellects into thinking he is acting in their best interests and the interests of the law.

He is a professional liar whose weapon is his tongue and mind as much as his gun. Like a filmmaker, he’s a man who creates narratives that become reality through sheer force of will. It’s telling that when he talks to Django (Jamie Foxx), the abused slave with whom he’s going to be working, he uses the language of theater and stagecraft to describe their work together and his part in it. Schultz explains to Django that he must be “in character” as Schultz’s valet for as long as that role suits their purposes, complete with a dandyish costume Django gets to pick out for himself. When the role of “valet” ceases to be useful, he segues effortlessly at Schultz’s behest into a darker and more aggressive role: the “slaver,” or black dealer in slaves and an expert on slaves forced to fight each other to the death.

Django’s central trauma is his separation from his beloved wife Broomhilda (Kerry Washington). When Schultz and Django learn that she is being held by the sadistic Calvin Candie (Leonardo DiCaprio), the owner of plantation called Candyland, they concoct another fictional narrative to suit their needs. Schultz enters Candyland with his trusted associate Django and pretends to be interested in purchasing one of Candie’s fighters with the purchase of Broomhilda as a side deal. Just as in Inglourious Basterds, our protagonists are in enemy territory where they could be killed in the most monstrous way possible if the people around them discover their true intentions. They must live a lie, and it is only when Schultz stops playing a role and reveals who he really is on the most profound personal level—a man who hates injustice and cruelty so much that he will kill Candie rather than shake his hand even if by doing so he is sentencing himself to death—that his protection is blown. Django’s cover is blown as well, and he too is forced to get out of character and do what he has been dying to do since the film’s first frame: save his wife and reclaim his manhood and self-determination.

Much of the pleasure from Django Unchained lies in the almost obscene pleasure Waltz derives in delivering Tarantino’s dialogue; seldom has there been such a perfect symbiosis between actor and filmmaker. Foxx, in a role at one point intended for Will Smith, has the much less showy part of a man who has to hide from himself as well as the world at large, who embodies the cold, hard stare and ruthlessness of the slaver he’s impersonating until the role gets down into his soul and infects him with its infernal meanness. Candie’s death puts him on a collision course with Stephen (Samuel L. Jackson), Candie’s top slave. Jackson plays Stephen as the man that hate made, a man who has so thoroughly internalized the racism with which he was brought up that his allegiances lie with Candie. Candie and Stephen share a toxic co-dependence, a twisted love that’s complicated and impossible to understand.

Jackson plays Stephen as a theatrical villain whose unrepentant nastiness demands to be avenged, and is avenged in a shootout that got my bloodlust pumping more than I was comfortable with, then or now. Django Unchained is the rare movie that might just be too entertaining for its own good. Tarantino might be obsessed with the past, but he is an entertainer above all else, so God bless him, when he made movies about the Holocaust and slavery, he succeeded in making the most fun, most wildly entertaining films about two of the most non-fun, non-entertaining subjects imaginable.