Fifty Shades Of Grey falls dramatically and sexily from grace 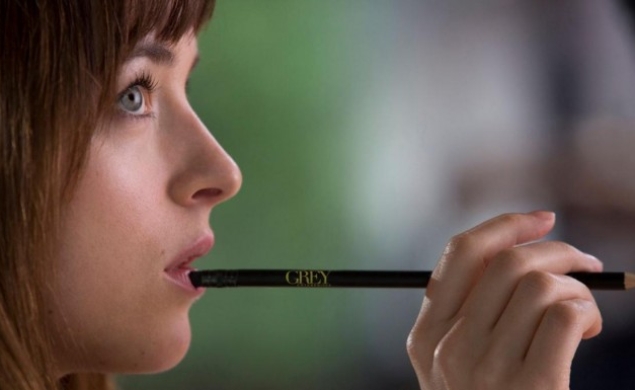 Apparently, everyone on the entire planet who wanted to see Fifty Shades Of Grey saw it last weekend. This weekend, the BDSM fairy-tale was taken to its own Red Room Of Pain and punished, dropping 72.7 percent in the box office. This puts it in the esteemed company of other blockbusters with massive openings and deep-dive second weekends: Friday the 13th, which dropped 80.4 percent; Doom, which dropped 72.7 percent; and the Twilight Saga: New Moon, which dropped 70 percent. Don’t shed too many tears for Fifty Shades, though; the flick still made $23.2 million for an international gross of $410.6 million—and it still marks the biggest movie by a female director, the biggest February opening weekend, and the second-biggest winter opening behind American Sniper. And, of course, it’s also a dramatic masterpiece unrivaled in cinematic history.

Despite its fall from grace, Fifty Shades is also still No. 1 in the box office, topping this week’s biggest new opener, McFarland, USA, which lumbered across the finish line at No. 4. The “white guy does sports things with minorities and everybody is redeemed” movie pulled in $11.3 million, giving a good-natured thumbs-up and a wink as it raced past Black Or White’s recent opening weekend gross of $6.2 million. This puts McFarland at No. 11 in terms of Kevin-Costner openings over time, besting Tin Cup and Bull Durham, but put to shame by the staggeringly erotic trifecta of Man Of Steel, The Bodyguard, and Message In A Bottle.

Another wide opener, The Duff—a teen comedy that explores the common problem of finding out you’re the “designated ugly fat friend” in your social group—fell just short of McFarland, pulling in $11 million on a $8.5 million budget for the No.5 spot. Not too shabby (for a Duff). But The Duff has, appropriately, proven itself the Duff of this week’s top five, and of high-school comedy openings over time, losing out to more attractive, thinner predecessors like 21 Jump Street ($36.3 million), Superbad ($33.1 million), and Mean Girls ($24.4 million). How many more times can we say “Duff”? Does the word still mean anything to you?

The weekend’s last big opening, Hot Tub Time Machine 2, drowned in its own filthy waters, coming in at No. 7 with a $5.8 million gross. Let’s go back in time for minute, through this here frothy, fetid jacuzzi, and look at the numbers for 2010’s Hot Tub Time Machine: a $36 million budget, a $14 million opening weekend, and a $64 million international gross. Now, let’s go back to the future—no, we have to get back in the hot tub, just do it—and examine what went wrong with the sequel. Ah, yes, here we are. It looks like Hot Tub 2's budget was insultingly slashed to $14 million—did they just take all of the money they made from the first one and invest it into this one? how prudent—its humor relies on various methods of harming penises, and it is generally just a terrible and depressing sham of a comedy. That’ll do it.

Elsewhere in the top 10, Kingsman: The Secret Service refused to hand over its No. 2. spot, making $17.5 million for a total of $67.1 million; The SpongeBob Movie: Sponge Out Of Water cleaned up at No. 3 again; and American Sniper fell from fourth to sixth place, but still pulled in $9.7 million in its ninth week for a total gross of $319.6 million—meaning it’s breathing down the neck of Guardians Of The Galaxy’s $333.2 million and The Hunger Games: Mockingjay—Part 1’s $336.4 million. Jupiter Ascending continued its rapid descent from fifth to eighth place, The Imitation Game Cumberbatched (a meaningless verb I just made up, do you guys like it?) from eighth to ninth place, and Paddington dropped from seventh to 10th place.