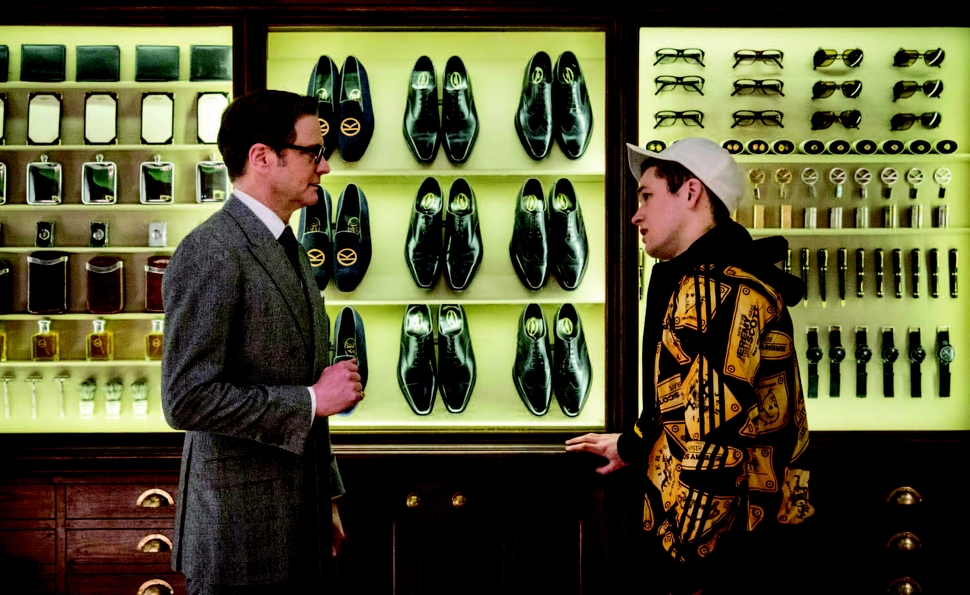 Here’s how the British save the world, at least in the popular imagination: Wearing bespoke suits, speaking the Queen’s English, and always keeping a quip and a cocktail close at hand. It’s a ridiculous, seductive vision of international intrigue, handed down by James Bond, John Steed, and others, and it’s been refined, tweaked, and demythologized almost from the start. Not even three years out from Dr. No, Bond producer Harry Saltzman released The Ipcress File, the first of several Len Deighton novel adaptations starring Michael Caine as Harry Palmer, a sort-of downmarket, unglamorous James Bond. (In one memorable scene, he uses canned food as a seduction tool.) Yet the image of the aristocratic gentleman spy has proven strangely enduring, and in Kingsman: The Secret Service, it gets simultaneously sent up, celebrated, and retrofitted with rocket boosters for 21st-century needs. The film never entirely figures out what it wants to do with the myth of the superspy, but at least it has fun along the way.

Occasionally, that fun even proves infectious. Adapting a comic-book miniseries by writer Mark Millar and artist Dave Gibbons, and co-writing the script with frequent collaborator Jane Goldman, director Matthew Vaughn doesn’t seem to know the meaning of the term over-the-top. Or if he does, he doesn’t care. Parkour, car chases, hand-to-hand combat, and wild gunfights erupt out of nowhere. Characters encounter insane deathtraps without a moment’s notice. Puppies suddenly appear and become intrinsic plot elements. Heads explode. Vaughn brings much the same approach he brought to a previous Millar adaptation co-scripted with Goldman, the teens-and-preteens-become-superheroes tale Kick-Ass. And as before, dizzying action scenes, casual crudity, and attempts to use the story to explore deeper themes all wrestle for space—with the first two elements usually triumphing over the lattermost.

The film opens in 1997 in “The Middle East,” where Harry Hart (Colin Firth) is leading a team of secret agents from the independent espionage group Kingsman on a dangerous mission. The mission ends with the death of their newest recruit, a soldier of working-class origins whom Hart had to fight to bring into Kingsman. The organization—whose offices include a fully functioning Savile Row tailor shop with many secret rooms—dates back to the 19th century, and it’s preserved a deeply ingrained snobbery, shared by its leader Arthur (Michael Caine, playing the posh opposite of his Harry Palmer). Like everyone else in the organization, Arthur got his codename from Arthurian lore, and he treats Kingsman as if it was all that stood between the chaos waiting just outside its door.

And it effectively is. In books like The Ultimates, Wanted, and Kick-Ass, Millar has made a career of stripping archetypes down to their essential elements and taking an unsparing look at what’s left. Here, the gaze is mostly admiring, apart from the classism. Seventeen years after that Middle Eastern misadventure, Hart champions Eggsy (Taron Egerton), the son of his fallen companion. A rough-around-the-edges product of public housing, eager to escape an abusive stepfather, Eggsy doesn’t hesitate to audition for Kingsman when given the chance, and Hart soon whisks him away to a training facility where he’s forced to compete against other would-be superspies, products of Oxbridge, most of whom do little to hide their disdain for Eggsy. Meanwhile, Hart and the rest of Kingsman investigate a series of mysterious disappearances that eventually bring them to the doorstep of lisping American tech billionaire Richmond Valentine (Samuel L. Jackson), who has some radical ideas about saving the Earth and some cataclysmic plans to enact them, even though he “can’t thomache violence.”

Kingsman: The Secret Service is all over the place, literally and figuratively. The globe-hopping adventures span from London to Argentina to Kentucky, and the film alternates between conversations between Hart and his protégé, and violence that might be unbearable if it weren’t so cartoonish, thanks to both the staging and the not-trying-that-hard effects. It’s at its best when it keeps the focus on Firth and Egerton. The veteran and the relative newcomer have an easy chemistry, with Egerton finding subtle ways to convey his transformation over the course of the otherwise unsubtle film. (It’s the rare origin story in which the protagonist seems to get more relaxed and easygoing as he becomes a bigger badass.) There’s a neat, Pygmalion-inspired (to the point of explicitly referencing My Fair Lady) twist on the espionage thriller at the center of Kingsman, but the film keeps pushing it deeper into the background. It toys with ideas it never spends that much time exploring, sidelining whenever an opportunity for an action scene presents itself.

Then again, this is an action movie, and Vaughn directs the many eruptions of increasingly bloody violence with flair. He brings a frenetic, mostly coherent touch to the action sequences, cutting frequently but only occasionally letting sensation overwhelm sense, which is more than many of his peers manage these days. (See “Megaton, Olivier.”) He doesn’t bring a great flair for pacing, however. Whole sections plod when they’re not sprinting, and the finale awkwardly cuts between three different locations, only one of which has anything of interest going on. And as with Kick Ass, Vaughn brings more cheek than heart to a movie that might have been more than a fun round of button-pushing if he’d teased out the emotions a little more. It’s fun enough, but in the long history of dapper men of danger, it’s less a daring reinvention than a rehash with attitude.