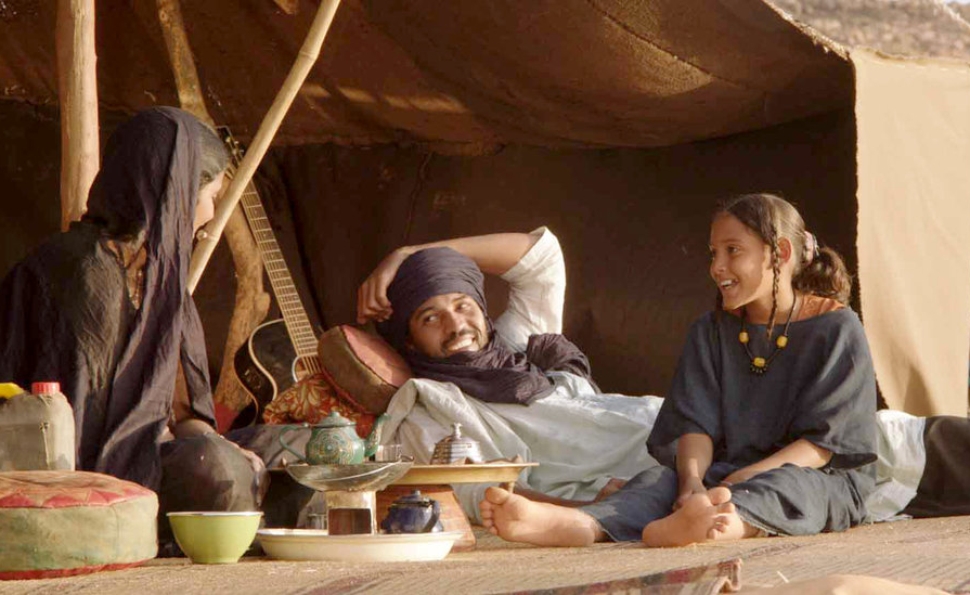 As part of a fractious jihadist insurgency in northern Mali in 2012, the Islamist group Ansar Dine took control over the city of Timbuktu, instituting Sharia law and destroying various cultural icons and institutions. Abderrahmane Sissako’s Timbuktu eventually gets around to the tragic consequences—the public stonings and lashings, the desecration and murder—but he considers it first as a simple disruption to everyday life. In a place where different kinds of people co-exist peacefully—Arabic, French, English, Songhay, and Tamasheq are spoken in the film, in addition to Bambara—Sissako treats the jihadists with an almost fish-out-of-water lightness in the beginning, as the local women brush away edicts that they cover their heads and hands, and an imam chides them for trampling into his mosque during prayer. And even when the film tips over into violence, Sissako never denies these hostile occupiers their humanity, even when the human traits they represent are jealousy, pettiness, and rank hypocrisy. They restrict people from playing soccer, but shoot the shit about Lionel Messi and Zinedine Zidane like everybody else.

Just as Sissako’s last film, Bamako, approached the crippling effects of African debt with the slice-of-life casualness of his other work, like Waiting For Happiness, Timbuktu’s politics aren’t heavily foregrounded. Instead, they serve as the underpinning of complex human relationships, which in turn serve as the best possible argument of Sharia law’s cruel, irrational inflexibility. In a film full of gorgeous imagery, Sissako dwells on the first shot of a herdsman and his family—Kidane (Ibrahim Ahmed), his wife Satima (Toulou Kiki), and their school-age daughter—living in the countryside, almost aglow in their self-sustaining happiness. One of the Islamist leaders, Abdelkrim (Abel Jafri), goes out of his way to harass Satima into covering her head, but the order is patently absurd; it’s hot outside, and there’s no one within miles of the place to get offended by her supposed immodesty. As the occupiers issue edicts by bullhorn—no smoking, music, or soccer; women must wear socks and gloves at all times; etc.—the effort seems comically ineffectual until they start backing it up with senseless brutality.

Sissako’s approach to Islamist violence in Timbuktu mirrors Terrence Malick’s approach to the invaders in both The Thin Red Line and The New World: as first and foremost a violation of nature. There may not be wealth in Timbuktu, but there’s a harmony of cultures that doesn’t take well to these heavy-handed impositions. Still, Timbuktu’s delicate tone is totally unexpected and specific to Sissako, who keeps finding notes of vulnerability, whether in Abdelkrim’s sublimated desire for Satima or in his young translator’s genuine sympathy for Kidane as Kidane submits to an interrogation that could cost him his life. He similarly finds a quiet resilience in a woman who defiantly sings through a public lashing for making music, or young men who play a soccer game without a ball, like the mimes in Blow-Up.

There’s no anger in Timbuktu, no rabble-rousing, just a suggestion that Sharia law is natural neither for the people living under it nor for those who impose it. Women want to work with their hands, kids want to play soccer, some people want a smoke break, and everyone wants to live in peace. And the Islamists are as guilty of violating the law as anyone else, and as guilty of failing to live up to their impossibly pious standards as anyone else, too. It’s slightly disappointing when Timbuktu morphs into the expected tragedy, not because the scenes aren’t affecting—to the contrary, the aforementioned lashing and interrogation scenes are the film’s most powerful—but because Sissako finally has to give in himself and deliver on the narrative payoffs he kicked down the road as long as he could. Much like the citizens of Timbuktu, if he had his way, he’d have probably rather just loped around in the sun.