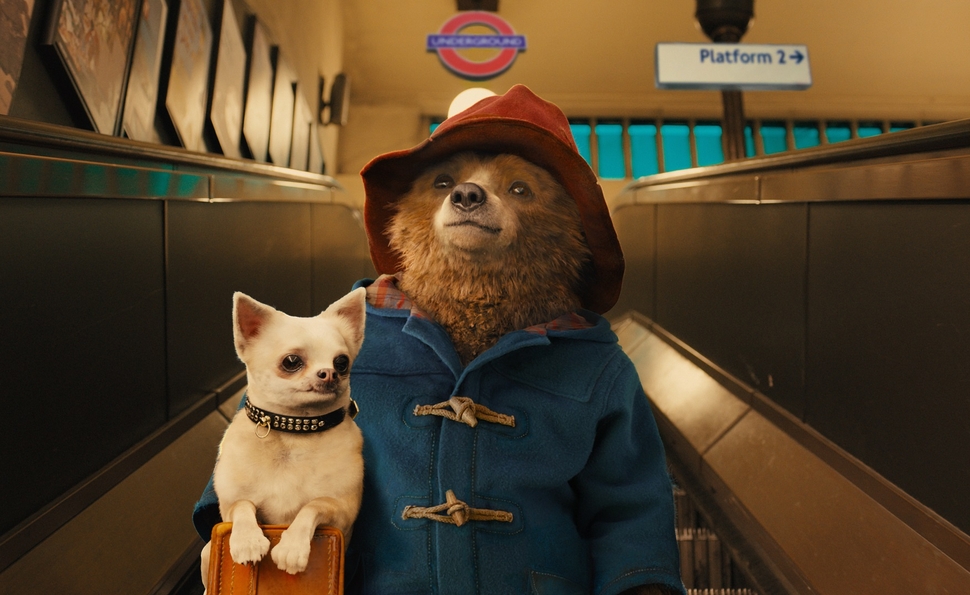 As beloved as Michael Bond’s Paddington books remain, they seem like unlikely candidates to be adapted into a modern, big-budget movie for kids. From the series’ first volume, A Bear Called Paddington, dating back to 1958, they’ve been defined by gentleness and drollery, two qualities in short supply in even the best modern children’s films. And described in isolation, moments from Paddington would seem to confirm the worst fears of any fan of the books. Take, for instance, the famous moment when Paddington, still adapting to his new home in London, spies a sign near an Underground escalator stating “Dogs Must Be Carried.” Confused by the linguistic ambiguity, Paddington finds a dog to carry before heading down. Paddington blows that little joke up into a big moment, setting it all to the go-to high-spirits music cue of lazy filmmakers, James Brown’s “I Got You (I Feel Good).” It’s all wrong.

Yet in context, that’s all right. Directed by Paul King, who helmed the hit British comedy series The Mighty Boosh, and produced by David Heyman, producer of the Harry Potter films, Paddington is very much a 21st-century take on Paddington, filled with CGI-assisted hijinks and moving at a go-go-go pace. In the hands of King and a well-chosen cast, however, the spirit of Bond’s books remains intact. However much chaos mounts around Paddington (voiced by Ben Whishaw, who replaced Colin Firth at the 11th hour, but sounds like a natural fit for the part) and his adopted English family, the focus remains on the little bear’s winning spirit, and the way his innate virtuousness rubs off on those around him.

A prologue sets up Paddington’s story: Visited by a British explorer in Peru, Paddington’s Aunt Lucy and Uncle Pastuzo (Imelda Staunton and Michael Gambon, respectively) become proficient in the English language and fond of orange marmalade. But when disaster strikes, Aunt Lucy has to send Paddington off to a safer home. So she packs him aboard a ship bound for England with enough marmalade for the journey and a note asking whoever finds him, “Please look after this bear,” and hopes for the best. Happily, Paddington soon encounters the Brown family, and despite the protests of risk-averse father Henry (Hugh Bonneville), Paddington takes up residence in their London home. There, Henry’s wife Mary (Sally Hawkins) fusses over him as their kids Judy (Madeleine Harris) and Jonathan (Samuel Joslin) befriend him, and their housekeeper Mrs. Bird (Julie Walters) tries to keep up with the changes in her household.

A multi-story dwelling arranged just so and occasionally filmed like a cross-sectioned dollhouse, the Brown home has the storybook feel of a Wes Anderson creation. When the plot kicks in, another, less lofty influence becomes apparent. After Paddington settles in with the Browns, he attempts to track down the explorer who made contact with his family. In the process, he unwittingly becomes the target of an evil taxidermist (Nicole Kidman) determined to have his hide. If Paddington were a live-action Disney vehicle from the Dean Jones era, it would almost certainly have exactly the same plot.

In spite of that pile-up of seemingly incompatible influences, Paddington remains winning through and through. King balances the antics with smaller moments, as in a lovely sequence that finds an antique-store owner played by Jim Broadbent recalling how he came to London as a refugee from World War II. Young war refugees first inspired Bond to create the character of Paddington, and the film never loses sight of that. Without stressing it too much, Paddington keeps suggesting that a nation can be judged by how it treats those who arrive helpless at its borders.

Hawkins brings shades of her indefatigable Happy-Go-Lucky character to Mary. Bonneville uses it as a chance to chip away at the stiff-upper-lip persona he embodies on Downton Abbey. And Paddington is a charmer, portrayed as a little guy whose unflagging goodness makes it easy to forgive his clumsiness. That’s the one detail from Bond’s book any adaptation has to get right, and this one nails it. The 21st century might be able to look after the bear after all.