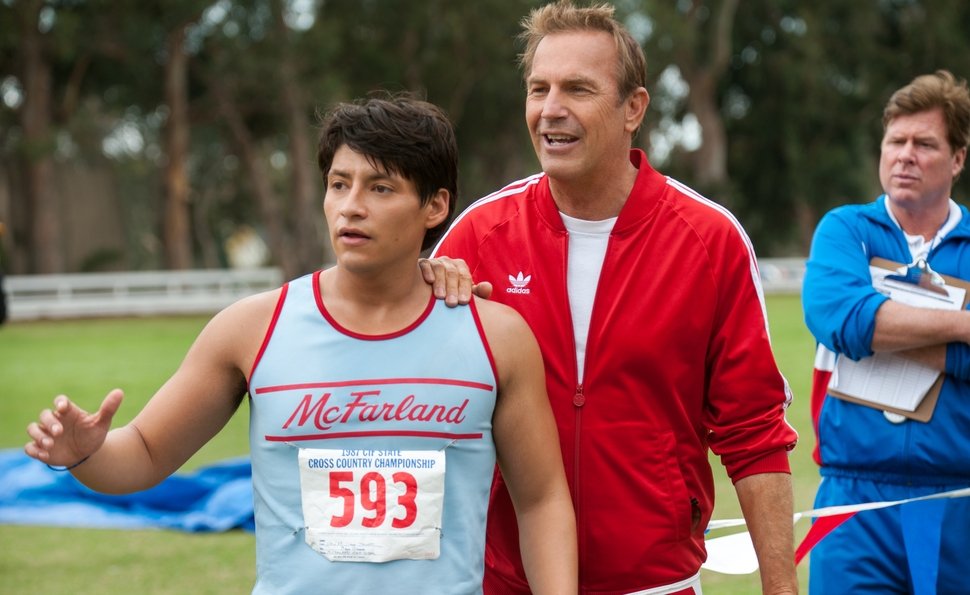 Let’s be upfront about this: McFarland USA takes the familiar form of the Disney inspirational sports movie—cynical white coach in need of redemption, minority misfits in need of hope and guidance, a little fish-out-of-water comedy, a big-game ending, waterworks, postscript, FIN. It hasn’t even been a year since the last one, Million Dollar Arm, with Jon Hamm as the cynical white agent in need of redemption, a couple of wide-eyed baseball prospects from poorest India, and all the rest of it. Disney has a way of turning all “Based On True Story” premises into the same story, just with different sports, different white guys, and different minorities. The formula is so plug-and-play, in fact, that Bettina Gilois and Christopher Cleveland, two of McFarland USA’s three screenwriters, recycled the clichés of their last produced script: 2006’s Glory Road, another Disney programmer with Josh Lucas as the Texas Western coach who led an all-black starting lineup to the NCAA basketball championship in 1966.

And yet, as they say in sports, the game ain’t played on paper.

In ways large and small, McFarland USA seems to recognize the problems inherent in the “white savior” premise and does what it can to address them, to surprisingly affecting ends. And while the film isn’t wiped clean of paternalism and condescension, nor does it shed that feeling of outsiders looking into another culture, it has a humility and big-hearted earnestness that sets it apart from its predecessors. A New Zealand native working in Hollywood, director Niki Caro (Whale Rider) seems to understand the mingling of cultures better than most, and her persistent tweaking of expectation gives the film a little extra texture and feeling.

Still, McFarland USA is rough going at first. It starts in 1987, as Jim White (Kevin Costner), a disgraced Idaho football coach, drags his wife Cheryl (Maria Bello) and daughters—freshman Julie (Morgan Saylor) and pre-teen Jamie (Elsie Fisher)—to a post of last resort in McFarland, California. One of the poorer cities in the country, McFarland is heavily populated by Hispanics—“Are we still in America?” Julie gripes—but the Whites (perfect name, that) reluctantly move into town and have their first meal at a taqueria, where Jim asks for a burger. (Were tacos really that exotic in the 1980s?) While working as an assistant football coach at McFarland High School, in addition to running P.E. and life-science classes, White notices that the team’s undersized players are fast, and their time working the fields as produce pickers has given them stamina and toughness. So he convinces the principal to back a seven-person cross-country team, which he then trains to become an unexpected force against much wealthier programs statewide.

As White (or “Blanco,” as his team affectionately dubs him) gets better acquainted with the kids—particularly his best runner, Thomas (Carlos Pratts), the son of a here-today/gone-tomorrow father who works in various fields as a foreman—McFarland USA starts to open up in kind. He and his family start to become part of the community, and the film makes members of that community known, including a strict-but-hospitable mother (an excellent Diana Maria Riva) to three of the boys, an aging grocer who never leaves his post, and a young manicurist who becomes Cheryl’s closest friend. Though White’s intervention helps these athletes, there’s just as much emphasis on his family’s immersion in local culture and their embrace of a different set of values. This doesn’t entirely separate McFarland USA from other movies of its ilk, but it goes further than something like Million Dollar Arm, with its stirring tale of Indian ballplayers inspiring an agent to be less of a jerk. The change here is deeper and more comprehensive.

That said, McFarland USA adheres to Disney sports clichés as much as it explodes them. The high-gloss magic-hour look, the lame culture-clash comedy, the odd spasm of violence to remind us we aren’t in the suburbs anymore—check, check, check. It’s as if Disney goes out looking far and wide for a specific type of underdog sports story—the exploits of a high-school cross-country team in 1987 aren’t the most widely remembered—and squeezes every example it finds into a one-size-fits-all template. With its genuine interest in the immigrant experience and what it means to be an American, McFarland USA ekes out a victory in the margins, proving that a little openness and a little self-awareness can do wonders.