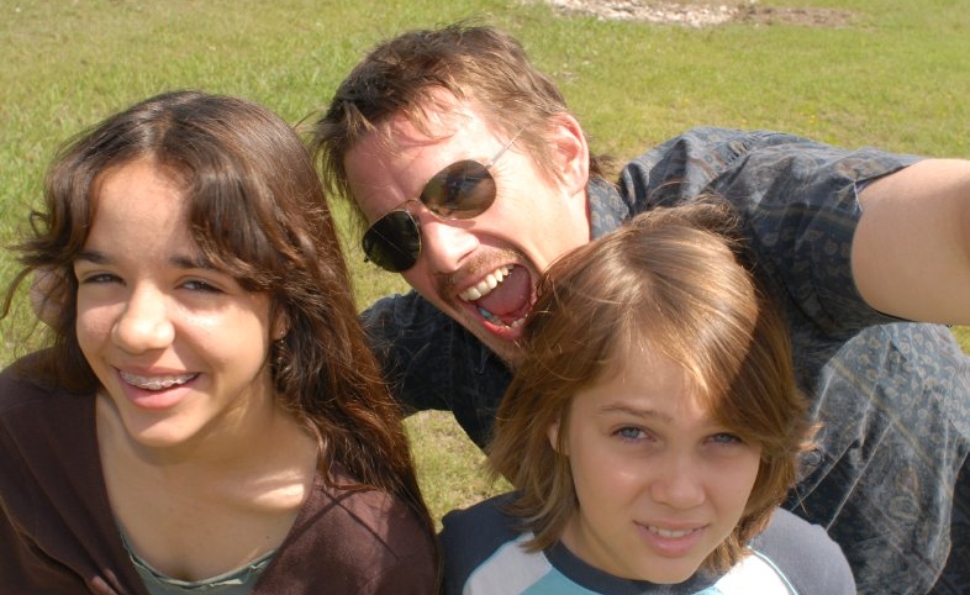 By the time Richard Linklater embarked on his 12-years-in-the-making Boyhood project, he had a decade of well-regarded films like Slacker, Dazed And Confused, Before Sunrise, and Waking Life under his belt—and some of those movies were just as experimental. So Linklater must’ve had an understanding from the start of how to keep Boyhood open enough to let it evolve organically, and he must’ve known that by shooting it in pieces for more than a decade, he was inevitably going to turn Boyhood into a record of his own development as a filmmaker. At times, watching Boyhood is like reading through an anthology of a long-running daily newspaper comic, not just because the movie is made up of fragments from a larger narrative, but because there’s always going to be some differences between panels that are drawn a decade apart.

Boyhood has a heck of a hook, whether viewers approach it as a document of Linklater, as a document of life in these United States (especially Texas) from 2002 to 2013, or as the story of one boy, from age 6 to age 18. In summer 2002, Linklater shot what amounted to a short vignette about first-grader Mason Jr. (played by Ellar Coltrane), living with an older sister named Samantha (Linklater’s daughter Lorelei) in suburban Texas, while splitting time between his divorced parents, Olivia (Patricia Arquette) and Mason Sr. (Ethan Hawke). One year later, the cast reconvened and shot another little slice of life, and then another a year after that, and so on—until the Mason Jr. character was old enough to graduate high school and move into a freshman dorm, at which point Boyhood ends. Rarely has anything like this been attempted in cinema, with a filmmaker intentionally setting out to watch a young person grow up on screen.

Boyhood isn’t wholly unique. Michael Apted’s Up documentaries have been following the same group of people since they were 7 years old (the most recent film caught up with Apted’s subjects at age 56), and countless movie series and TV series have tracked characters as they’ve matured and changed. Sometimes the tracking happens inadvertently, just as a consequence of telling multiple stories about the same characters, and sometimes it’s been embedded in the bones of the project, as is the case with the Harry Potter books and movies, which follow the trials of a young wizard from age 10 to adulthood. Not coincidentally, Olivia reads one of the Harry Potter novels to Mason Jr. in one of Boyhood’s earliest scenes, and later in the movie, Mason Jr. joins the throng of grade-schoolers lining up for the midnight release of a later Harry Potter book. It’s as though Linklater is nodding at another piece of popular culture that documents the life of a kid, year by year. It’s then up to Linklater to make this idea his own.

One way Linklater does this is by filling Boyhood with cultural signposts, beyond Harry Potter. The movie is purposefully strewn with “dated” technology, politics, fashion, and music. This ends up being one of Linklater’s smartest and boldest moves, since he had no way of knowing which trappings of modern life might still resonate with audiences a decade later—or how, for that matter. A film made today set in the early 2000s might insert a shot of one of the original, colorful iMacs in a winking way, or might treat a scene where the two Masons go watch Roger Clemens pitch for the Houston Astros as overtly ironic, given Clemens’ later legal troubles. Linklater includes these in Boyhood because they’re part of the background of Mason Jr.’s life, though only incidentally.

As Boyhood records a changing world, it also intermittently captures common rites of passage, both for children and their parents. But there’s no particular “plot” here, or over-determined structure. Boyhood doesn’t go from birthday to birthday, or from major life event to major life event. As Mason Jr. grows up, his family moves from small cities to college towns, and from low-rent apartment complexes to upper-middle-class subdivisions, all in a state where children say the Texas Pledge after the Pledge Of Allegiance, and where even people who campaign for Democrats accept a certain amount of gun-ownership and fundamentalist religion as part of what it means to be Texan. While Olivia and Mason Sr. go through their own changes—acquiring college degrees, finding gainful employment, and meeting new spouses—Mason Jr. sees people drift in and out of his life. Step-siblings and half-siblings come and go, as do friends and girlfriends, and a series of grown-ups who deliver life lessons in a familiarly Linklater-like way. (Mason Sr. in particular likes to compensate for being a part-time dad by fitting in as many lectures as he can during his time with his son, such as in an early scene where he won’t let Mason Jr. use the gutter-guards at the bowling alley because “life doesn’t give you bumpers.”) None of this is specifically tied to the times, but it is tied to the place, and is part of Boyhood’s overall effort to show how kids and adults muddle through their lives, lacking the perspective to understand what’s really important.

In fact, the cleverest aspect of Linklater’s approach is that there is no grand design, because nobody living in 2002 would’ve known what would still matter in their lives in 2012. That’s why, in lieu of showing Mason Jr. losing his virginity or anything like that, Boyhood includes a scene where he hangs around a construction site at night, drinking and acting stupid with his friends, all of whom pretend to be more experienced about sex than they actually are. It would’ve been easy for Linklater to play on the audience’s sentimentality by repeating lines, and by constantly reminding viewers of what the characters used to look like. Instead, Boyhood is almost completely devoid of callbacks, and its one brief attempt at a narrative arc—when Olivia marries a pushy alcoholic—is so unlike the rest of the film that it threatens to derail the whole enterprise. It’s unusual for a movie so ostensibly ambitious to be so stubbornly, meaningfully shapeless.

When Linklater started Boyhood, he hadn’t yet made Before Sunset or Before Midnight—or School Of Rock, or Bad News Bears, or Fast Food Nation, or Bernie. Linklater fans could use Boyhood as a point of comparison for the other movies he was making throughout the 2000s. Is it a coincidence that Boyhood becomes a little uneven right around the time his career hit a mini-lull? Does the assured final hour reflect the renewed confidence he’s shown over the past few years? Or does Boyhood just have its occasional dead-ends or flat performances because that’s the way life goes?

Maybe Boyhood’s aesthetic arc—starting out enjoyably casual, becoming awkwardly story-driven for a brief time, transitioning into a general aimlessness, then becoming charged with meaning down the stretch—was influenced by what Linklater was observing in his own family life. Boyhood could’ve just as easily have been Girlhood, following Samantha’s coming of age, and, along the way, Lorelei Linklater’s. But that might’ve hit too close to home. Instead, Linklater weaves in pieces of his own memories and experiences, both as a kid who grew up in Texas and as a parent. As Boyhood nears the end, it reaches a small, painful epiphany, once Olivia realizes she’s spent the past 10 years pushing Mason Jr. toward independence, and now is about to lose him. There’s a lot going on in Boyhood, none of which seems all that significant at the time. But if the movie is about any one idea in particular, it’s about how parents do their best to stay on top of how their children grow, by taking pictures and documenting the memorable occasions, only to learn too late that most of life happens between the posing.