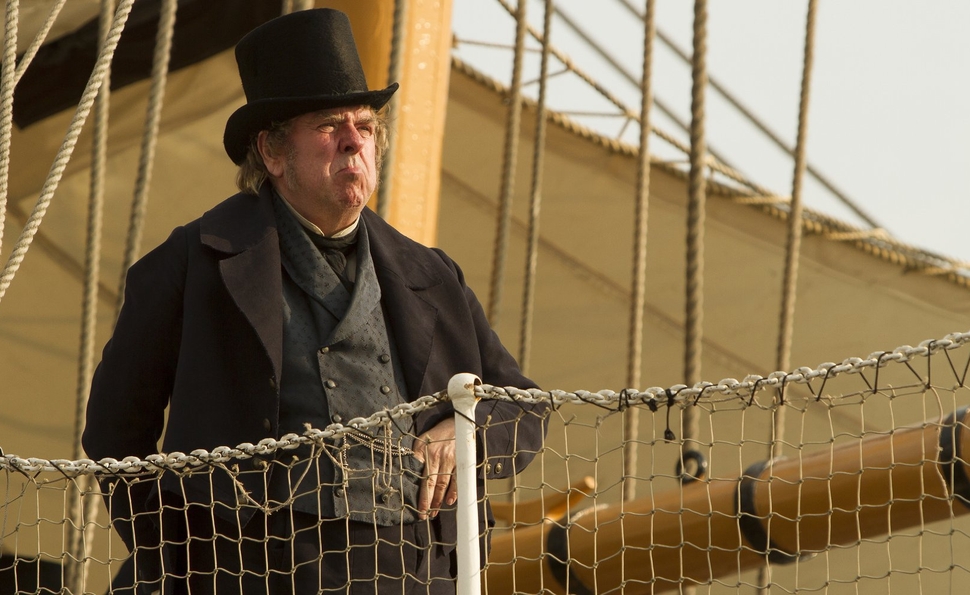 Read enough biographies of great creators, and a nagging question emerges: Was everyone a bastard of one sort or another? Whether it’s Charles Dickens’ callous disregard for his wife, Miles Davis’ abuse of women, or any number of more recent examples, artists’ lives offer uncomfortable proof that brilliance and goodness don’t go hand-in-hand. It’s tough to reconcile how someone capable of questionable, even execrable behavior could also simultaneously be attuned to truth and beauty. It’s tempting to divide the art from the artist as best as possible, but that doesn’t work either: It’s a human hand that picks up the brush, the pen, or the microphone, and human lives that lead them to do so.

As ill-advised as it is to draw a clean separation between a life and a work, there’s also the danger of letting the dubious and the dire overwhelm all other considerations. Reduced to his worst moments, as depicted in Mike Leigh’s new biopic Mr. Turner, J.M.W. Turner—a British painter who sent shockwaves through the art world in the first half of the 19th century with his daring landscapes—sounds like a man whose life deserves little commemoration. Turner did his best to ignore the mistress who bore him two children, and to ignore the children as well. He joined his father in committing his mentally ill mother to Bedlam. He took sexual advantage of his housekeeper, Hannah Danby. He often did not play well with others.

The triumph of Mr. Turner is partly the way the film lets those elements of Turner’s life sink into a fuller portrait of the artist, one that neither forgives him his failings nor lets them define him, or overwhelm his accomplishments. It’s all the more remarkable for the performance at its center. As Turner, Timothy Spall grunts as much as he talks, using the pug-like features he shares with Turner as a mask, one he only lets fall away when overwhelmed with the emotions he usually tries to hide. John Constable, Turner’s great rival, described him as “uncouth,” coded language that did little to hide a distaste for his humble origins as the son of a London barber. Spall plays Turner as a brusque character with little room for social niceties, but possessing a soul sensitive to stirrings in the universe invisible to most. It’s brilliant work that deepens with each scene, as the details of Turner’s life pile up and the shape of his character becomes clearer. Yet there’s a mystery to it, as well: In one sequence of scenes, Turner sits by the deathbed of his father  and greatest supporter (Paul Jesson), goes fishing, visits a prostitute whom he has pose for an erotic sketch, breaks down in tears, draws, and has unaffectionate sex with Hannah. There’s no clear connection between one scene and the next, or even a clear sense of how much time passes between each, yet Spall’s performance makes them all seem connected in ways perhaps even the character doesn’t understand.

Topsy-Turvy, Leigh’s other great biopic of 19th-century lives, succeeded in part by narrowing its focus to a few eventful months in Gilbert and Sullivan’s careers. Mr. Turner opts for a different approach, following Turner from his middle age, at a point when he’d become well-established as an artist, to his final years. Leigh makes time very much an element of the film, letting its passing weigh on Turner, who sees his work go from sitting at the cutting edge to becoming the subject of mockery as the world changes, and tastes change with it. As with Topsy-Turvy, Leigh realizes that world to its smallest detail, filling scenes with details of life as it’s no longer lived, or as it’s changing. For instance, he observes how trains—the subject of one of Turner’s greatest paintings—become increasingly central in the way the characters travel about the country. Turner begins the film as a man of his age, and ends it as a remnant.

It’s a rich film in every respect. As the ill-fated painter Benjamin Haydon, Martin Savage makes his scenes seem as if they could support a film all their own. Other characters, like the scientist Mary Somerville (Lesley Manville), appear for a scene or two to offer a glimpse of another, larger world happening outside the frame of the film. Without resorting to mimicry of Turner’s work, Dick Pope’s cinematography pays careful attention to the play of light and shadow that respects Turner’s artistic passions. Above all, Leigh’s generous approach to capturing the fullness of Turner’s life, through unhurried rhythms and scenes, makes Mr. Turner memorable. Visiting the seaside town of Margate, Turner listens to an innkeeper tell dreadful tales of his time working on a slave ship, stories Turner lets pass with little comment. Later, the critic John Ruskin (played with more than a touch of ridiculousness by Joshua McGuire) effuses about the pity he feels when he sees the painting that anecdote inspired. Turner—though seemingly an unlikely vessel for such feelings—has put the innkeeper’s regrets onto the canvas for eternity. Life spills into art, and even if there’s no making sense of it, Mr. Turner suggests that recognizing the dynamic goes a long way toward helping people understand both.