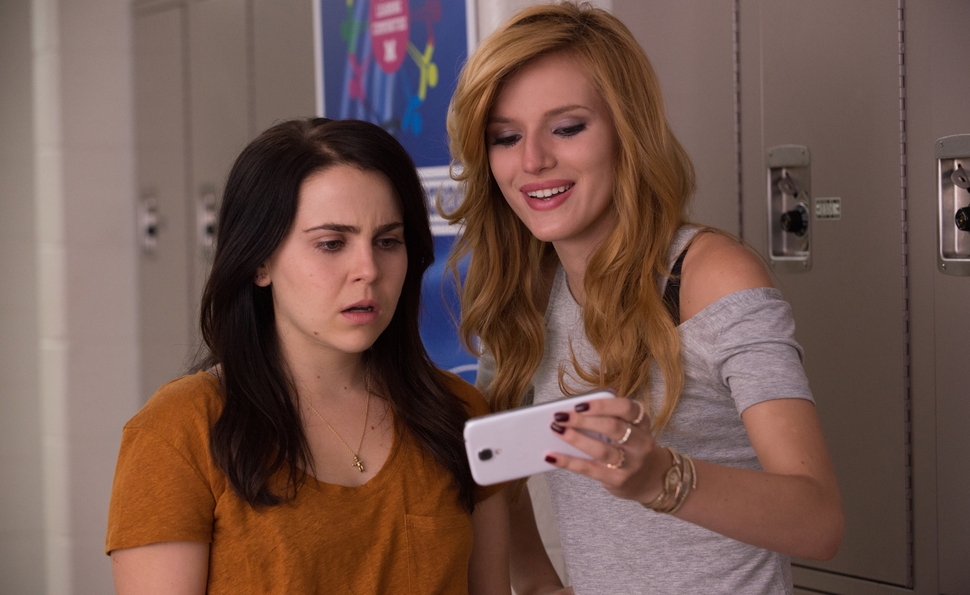 The idea of a “DUFF”—a “designated ugly fat friend,” or the less-attractive person hot people keep around to make them seem more desirable and approachable—is hideous, offensive, and shallow. And to its credit, The DUFF treats it as such. The idea of Arrested Development’s Mae Whitman, a just barely unconventionally attractive, objectively not-fat actor being a DUFF is even more hideous, offensive, and shallow. And to its detriment, The DUFF doesn’t do enough to undermine that idea. But it does allow Whitman’s character, Bianca, an overalls-wearing, cult-movie-loving smartypants, to rail against the idea that she’s a DUFF, and the very idea of DUFFness—initially in a funny, over-the-top way, before cycling around to a cuddly, teen-movie-friendly message that encourages everyone to embrace their inner DUFF. Offensiveness negated, right?

Those who have already grown weary of the word DUFF after that first paragraph will find no relief in the movie itself, which leans into its ridiculous central term in a borderline-hypnotic manner that eventually obfuscates its inherent stupidity, allowing viewers to settle into its fairly standard teen-movie world. Bianca begins the movie by explaining—in voiceover, naturally—that the Hughesian era of social-group conformity is long past, as evidenced by her tight friendship with sweetheart fashion maven Jess (Skyler Samuels) and tough-as-nails hacker/athlete Casey (Bianca Santos). Bianca exists happily enough in this post-clique world until her next-door neighbor/nemesis, football captain Wesley (Robbie Amell), jovially informs her that she’s Jess and Casey’s DUFF, which is why people are always asking her questions about them rather than her. Though initially appalled and enraged by the notion, Bianca lets it get under her skin, leading to a self-confidence implosion of epic proportions.

Bianca’s first act as a self-aware DUFF is to lash out at her confused best friends, resulting in a social-media-fueled “unfriend-off” that will probably stand the cinematic test of time about as well as Valley Girl’s slang. She then runs to Wesley’s well-muscled arms (and abs, and legs, and back, and probably some other places we don’t get to see), putting aside her supposed hatred of him to strike the sort of bargain that has fueled teen movies for decades: She’ll help him with his schoolwork so he won’t get kicked off the football team, if he’ll help her un-DUFF herself and get a date with the guitar-strumming, sensitive, “#Amazeballs” boy of her dreams, Toby (Nick Eversman). Cue the shopping-mall makeover, the “lessons” in dating, and the inevitable school-wide humiliation at the hands of one-dimensional Evil Popular Girl Madison (Bella Thorne) and her cameraphone-toting flunky—sorry, DUFF—Ashley (Gabriela Fraile).

Bianca’s self-destructive behavior could read as oblivious at best, stupid at worst, were Whitman not such a naturally likable and funny performer. She gives Bianca a self-aware edge without completely undercutting her teenage naïveté, and her chemistry with the similarly likable Amell gives their improbable partnership a charge that lends some credence to their relationship’s obvious trajectory. Also helping matters: Allison Janney as Bianca’s mom, a divorcée-turned-self-help-maven who spouts useless, pun-based platitudes that are of no help to Bianca (or, arguably, anyone), but help highlight the no-win nature of her situation.

The DUFF, adapted from Kody Keplinger’s 2011 YA novel of the same name, proceeds along the same broad path as countless high-school comedies before it—the echoes of Easy A and Mean Girls in particular are audible throughout the film—without a lot to distinguish it besides its title and a hyperactive, vlogger-influenced visual style that marks it as an artifact of the mid-2010s as strongly as its social-media obsession does. Director Ari Sandel comes from the worlds of short film and comedy, and much of The DUFF has a fragmented, sketch-like comedic tone and pacing—lots of smash-cut fantasy sequences and improv-honed bits, some of which work better than others. The film’s furious volley of onscreen text, much of it in the form of hashtags, is distracting more often than it’s funny, but it does underscore The DUFF’s commitment to setting itself apart from its teen-movie forbears in superficial, rather than narrative, ways. (Along those lines, it might be the first major release to include Twitter handles for its cast and crew in the credits.)

And yet for all its potential pitfalls, The DUFF manages to keep its head above water, thanks to Whitman, Amell, and a willingness to engage with teen-movie clichés in a relatively thoughtful way. It isn’t the best, prettiest, or smartest example of the teen movie, but it isn’t the genre’s DUFF, either.