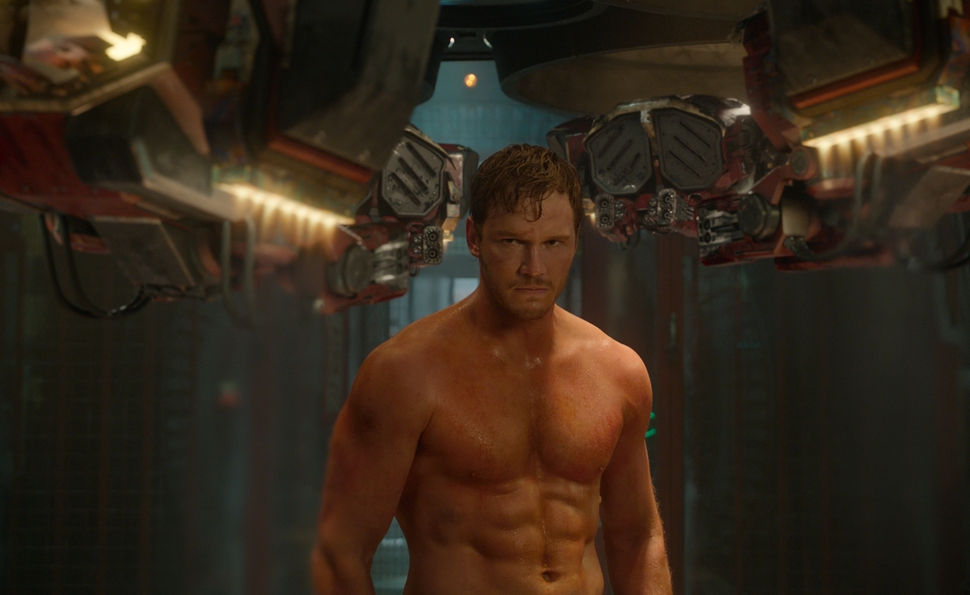 Guardians Of The Galaxy

When Marvel Studios announced Guardians Of The Galaxy as a 2014 entry in its ever-expanding cinematic agenda, it left many people scratching their heads. Though the intergalactic team has been kicking around the universe in one form or another since the late 1960s, it’s always been a cult taste, lacking the name recognition of other Marvel characters. Yet anyone wondering what kind of movie they’re watching should have a pretty good idea before Guardians Of The Galaxy’s opening credits end. As a foreboding bit of Tyler Bates’ score plays, a ship lands on a desolate planet. A masked figure emerges, then begins to explore the ruins of a once-bustling planet via a device that creates ghostly images of its former residents. The camera lingers on the majestic alien landscape, one realized to the smallest detail, and clearly the work of artists who put a lot of thought into what kind of inhabitants once lived there, and how they lived. It’s a beautiful, eerie moment, freighted with the sadness of a lost world and hints of danger. Then the masked figure, soon to be revealed as Peter Quill, a.k.a. Star-Lord (Chris Pratt), grabs a more primitive piece of technology, a Sony Walkman housing a tape labeled “Awesome Mix Vol. 1,” hits play on Redbone’s 1974 hit “Come And Get Your Love,” and starts dancing, sliding, and shuffling across the screen, while looking for a mysterious orb that serves as the film’s central MacGuffin. So is space a somber place haunted by the specters of past destruction and filled with imminent peril? Or is it a silly one, where a devil-may-care adventurer can groove out to super hits of the 1970s while taking advantage of reduced gravity? Guardians answers the question by refusing to answer, playing the two tones off each other until they start to harmonize.

The penultimate entry in what Marvel has dubbed “Phase Two” of its big-screen operations, Guardians is notable for many reasons, among them what it isn’t: a superhero movie. Though it clearly takes place in the same universe as the other Marvel films, it’s connected to them only by that MacGuffin, which is later revealed as a key piece in a much larger story. Apart from a prelude set on Earth in 1988, it leaves the world of Iron Man, Captain America, and Thor behind, and carves out a different corner of the universe all for itself, one filed with strange species, power-mad bad guys, warring factions, barely holding treaties, and other space-opera fixtures.

That prelude is brief, but it matters. It shows young Peter Quill (played as a child by Wyatt Oleff) desperately trying to tune out the world by retreating behind his headphones, as he listens to the same mixtape he’ll later enjoy as a space explorer. He’s trying to avoid dealing with his mother’s imminent death, and when cancer finally takes her, he flees the hospital, only to get whisked into space by an alien craft. James Gunn, who directed Guardians Of The Galaxy and co-wrote its script with Nicole Perlman, has a long history of depicting how characters use pop culture and childhood fantasies to escape from the world, but as in his past work, no one here ever escapes all the way. The grown Quill, having come of age as a pirate among the Ravagers, now flies the galaxy in a ship pumping his favorite songs and adorned with tokens of his childhood (including Alf trading cards), searching for treasure and bedding alien women on seemingly every planet he visits. But his past still trails him, even into this seeming dream come true.

Gunn fills the film with similarly damaged characters. As Quill tries to unload the orb, he runs afoul of the law on the peaceful planet Xandar while fighting off several people interested in collecting either the orb or the bounty on his head. These include Gamora (Zoe Saldana), the adopted daughter of the villainous Thanos (Josh Brolin), who’s loaned her out to the fanatical Kree warlord Ronan (Lee Pace). Also looking to take Quill down: Rocket (voiced by Bradley Cooper), a genetically altered bounty hunter who looks like a raccoon (though he doesn’t seem to know what raccoons are), and his partner Groot (voiced by Vin Diesel), a sentient, towering, tree-like creature whose vocabulary is limited to one declarative sentence: “I am Groot.” When the Xandarians arrest them en masse and ship them off to a floating prison, they meet Drax The Destroyer (Dave Bautista), a warrior who lost his family to Ronan, and is hellbent on destroying him. (Gunn’s film draws primarily on the incarnation of the team introduced by co-writers Dan Abnett and Andy Lanning in the late 2000s.)

Rocket encapsulates all the elements that make the film work. There’s something inherently funny about a walking, talking, sharpshooting, people-clothes-wearing raccoon, and the film does nothing to retreat from the humor. Cooper delivers a big vocal performance, and the effects team renders him as varmint with a peevish streak. Yet in one scene, Rocket turns into an angry drunk, lamenting his freakish nature and lonely state. It’s the sort of movie where even the funny animals have a tragic air.

And yet it’s a lot of fun, too. Pratt strikes a balance between heroic and goofy, playing an action-figure-ready movie hero with more than a touch of the man-child he plays on Parks And Recreation. He’s in good company, too: Saldana brings an intense physicality (with just a touch of vulnerability) to her role. Groot is as expressive as a tree-creature can be. And Bautista, a wrestler-turned-actor, displays a keen sense of deadpan comic timing. Gunn sets them loose in a universe that presents one astounding sight after another, but he keeps the focus firmly on the characters. As in Star Wars—a clear inspiration for the film, from its ragtag assemblage of reluctantly cooperating heroes to its lived-in technology—the issues of what planet wants to destroy what other planet and why matters less than the people caught up in the fighting—and even they’re sometimes at a loss as to what’s going on and why.

Marvel’s less-than-smooth parting of ways with Edgar Wright in advance of Ant-Man didn’t bode well for directors being able to express themselves within the Marvel Cinematic Universe. For now at least, Gunn, a B-movie enthusiast who got his start at Troma, has found a way to bring funkiness and humanity to a galaxy-spanning blockbuster, one filled with dogfights and floating fortresses, but also with heroes quick with a quip, fast on the draw, and more than a little beaten up by the universe. It’s set far, far away, but Gunn keeps finding ways to keep it grounded in the known universe.