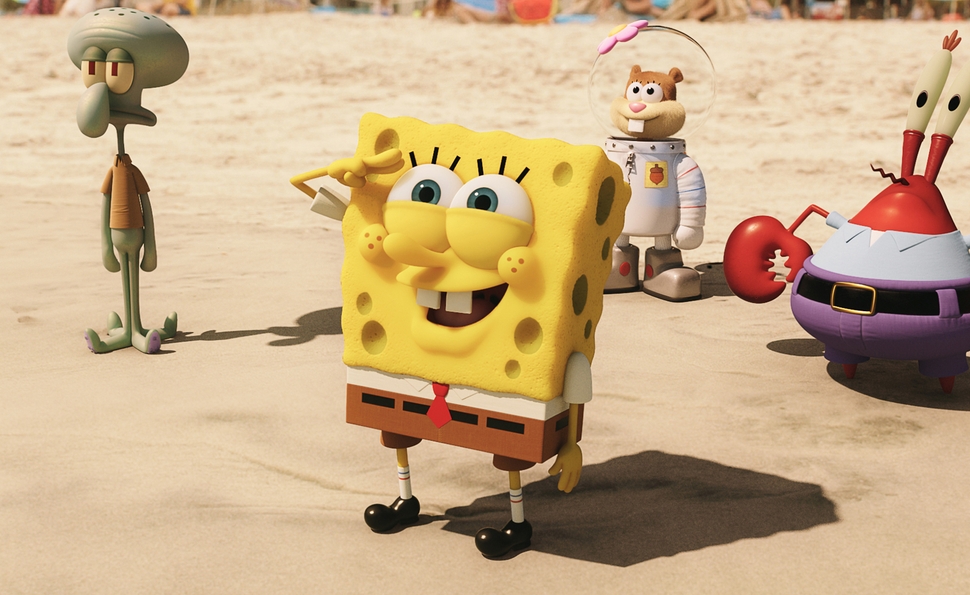 The SpongeBob Movie: Sponge Out Of Water

Most kids have at some point wished that their favorite TV or movie characters could step out of the screen to say hi. That partially explains the proliferation of feature films where fictional characters find a magical portal into our world: Movies like Last Action Hero, The Purple Rose Of Cairo, and Enchanted use the trope to comment wryly on both the fantasy of hanging out with fictional characters and the disconnect between cinematic wonderlands and prosaic reality. Less-ambitious stories—2000’s The Adventures Of Rocky And Bullwinkle, 2004’s Fat Albert, 2011’s The Smurfs—acknowledge the fantasy, but may be more about the cost-saving device of using live-action instead of full animation, or about upping the scale to big-screen size by removing long-established characters from their well-explored, insular settings. There’s still room for commentary in even the laziest cartoons-in-the-real-world story, though, in how those cartoons relate to the world we take for granted. (The Fat Albert kids boggle at cell phones and laptops; the Smurfs pointedly praise Sony’s brand partners.) But all this assumes the filmmakers are interested in the real world in the first place.

The long-running Nickelodeon cartoon SpongeBob SquarePants first made it to theaters in 2004’s The SpongeBob SquarePants Movie, and has now returned with The SpongeBob Movie: Sponge Out Of Water; both films bring the animated characters into the physical world for part of the narrative, but neither film sees those settings as particularly different. Both worlds enjoy the same cartoon physics and oddball mayhem. There’s no need for these films to consider how people’s wish-fulfillment stories don’t jibe with reality, because they don’t acknowledge any disconnect. SpongeBob’s world is wacky enough to regard all backdrops as equally irrelevant in the quest for bigger and brighter nonsense.

The film opens with live-action pirate Burger Beard (Antonio Banderas) channeling Captain Jack Sparrow as he swishes through a series of deathtraps to claim a dusty tome from an ancient pirate skeleton. The book becomes a framing device: Its story, which Burger Beard reads to a group of yammering CGI seagulls, takes place in the TV show’s familiar 2-D animated setting, the tiny undersea town of Bikini Bottom. In what amounts to a mega-episode of the show, eternally upbeat fry cook SpongeBob (Tom Kenny) and his greedy crab boss Mr. Krabs (Clancy Brown) fend off their perennial rival Plankton (Mr. Lawrence) as he attempts to steal the recipe for their universally beloved fast-food sandwich, the Krabby Patty. When the recipe magically disappears, Bikini Bottom falls into chaos without the uniting force of the Krabby Patty, and Plankton and SpongeBob have to join forces to track it down. Their quest leads into the past, the far future, and eventually to our world, in the form of Savannah, Georgia, standing in for a beachside villa.

Screenwriters Glenn Berger and Jonathan Aibel (previously partners on both Alvin And The Chipmunks big-screen sequels) pile on the pop-culture references and meta twists: The post-Krabby Patty apocalypse arrives instantaneously, for instance, in a smash cut that changes the Bikini Bottom residents into leather-clad, mohawked Mad Max extras in the wreckage of their burning town. Later, when it’s time for the core cast to do something significant, an unnamed extra sighs, “Okay, all secondary characters come with me,” and leads them offscreen. SpongeBob has always been one of those ultra-anarchic, random-access shows equally beloved by small kids and stoned nostalgists, and the newest movie continues the tradition, alternating copious gross-out gags with stylish animated experiments and the occasional Stanley Kubrick or Sergio Leone reference. Seagull poop and psychedelia freak-outs are given equal weight.

A major difference between 2004’s The SpongeBob SquarePants Movie and the new one is the scale: When the characters emerged into live-action in 2004, they were tiny cel-animated blips in an indifferently large-scale world. But this time out, a magical plot device lets them re-create themselves as gigantic, powerful CGI superheroes, suitable for kicking off a blockbuster-scaled climactic battle. There’s nothing here to match the sheer repulsive strangeness of SpongeBob and his buddy Patrick being fired from David Hasselhoff’s hairy pecs in the 2004 movie, but there’s certainly more testosterone, and more attempts at kicking up the audience’s adrenaline level rather than its THC level. It’s amiable goofiness, delivered at an emphatic, feverish pitch.

Inevitably, what works fine in 11-minute episodes becomes strained over 90 minutes on the big screen, especially during a grating musical number about teamwork. It’s surprising that a film so fast-paced does so little with the infinite possibilities of the magical reality-rewriting device: It mostly just lets Burger Beard make a little money, and lets SpongeBob and company tap into the current mania for superpower throwdowns. That’s the problem with a comic premise that keeps the characters static to ground the constantly changing narrative rules: No matter what universe they inhabit, they’re basically the same, from decade to decade and world to world. They change for the times as much as necessary, but this still feels as much like a throwback to 1999 as a film for 2015. Which isn’t a bad thing—especially for those stoned nostalgists, or people who were kids in 1999 and have become stoned nostalgists in the interim. If nothing else, it’s a rare case where pulling a cartoon into the real world reveals more about the former than the latter.