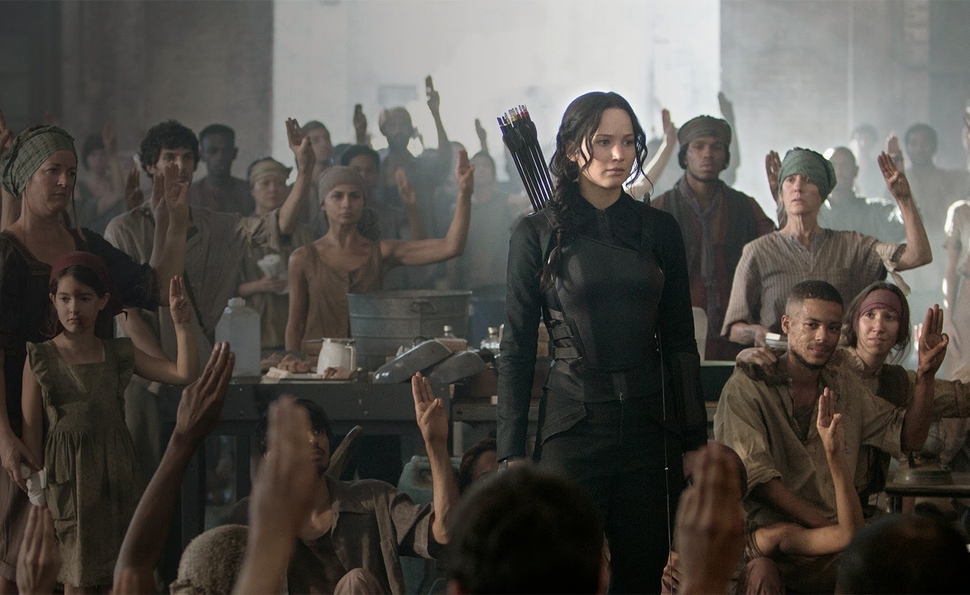 Mockingjay—Part 1, the third entry in the Hunger Games film tetralogy, begins with one traumatized character rocking and mumbling to herself while hiding inside a heating duct, and another traumatized character saying he wishes he and everyone he knows were dead. It does not get any cheerier from there. This shouldn’t come as a surprise to anyone who’s followed the series, which has murder and class warfare baked into its premise from the beginning. But it’s still startling to realize one of the most lucrative blockbuster franchises in recent memory has embraced gray-toned bleakness and despair as wholeheartedly as Hunger Games.

Taking its cues from the third book in Suzanne Collins’ YA trilogy, Mockingjay—Part 1 transforms what was a dystopian fantasy series with heavy political and social overtones into a full-on war picture, with all the death, destruction, and despair that entails. Picking up shortly after the events of last year’s Catching Fire, the film finds a PTSD-stricken Katniss (Jennifer Lawrence) living deep in the underground fortress that comprises District 13, a region of Panem that was thought to be destroyed in the long-ago war that set up Panem’s Capitol as a totalitarian regime. After sort-of-unintentionally destroying the Hunger Games Arena and consequently inciting an uprising in Panem’s districts at the end of the last movie, Katniss has become the face of the new rebellion, while Peeta (Josh Hutcherson), her partner in the last two Hunger Games, has been captured by the Capitol. Consequently, Katniss is more or less a sentient cauldron of guilt and rage throughout Mockingjay, a combination that doesn’t mesh particularly well with her ordained position as the rebellion’s public face. That ordination comes at the hands of Philip Seymour Hoffman’s Plutarch Heavensbee, introduced in Catching Fire as the rebellion’s man inside the Capitol, and here conspiring with maternal yet severe President Coin (Julianne Moore), the military leader of District 13 and the rebellion.

The problem is that Katniss has never responded well to being told what to do, regardless of whether it’s the Capitol or the rebels giving the orders. Her complicated feelings toward the war she’s been forced into symbolizing make her a terrible mouthpiece in the shiny propaganda videos Plutarch has conceived. (A sequence of Katniss trying, and failing, to spout pre-written bromides for the cameras provides the movie with one of its rare laugh-out-loud moments.) So at the suggestion of her newly sober former mentor Haymitch (Woody Harrelson), the District 13 brass sends Katniss out into the districts to meet the rebel forces, tailed by a camera crew (led by a badass-ified version of Game Of Thrones’ Natalie Dormer) hoping to capture the fiery passion that has made Katniss the movement’s unlikely figurehead. The horrors Katniss witnesses in the districts—including the bombed-out, corpse-covered remains of her former home, District 12, annihilated in retribution for her defiance toward the Capitol—inspire her to become the “Mockingjay” character the rebels need her to be. It also destroys her to see all the terrors she’s wrought as the reluctant symbol of what’s become a brutal civil war.

Through her feelings of guilt, fear, and anger toward both the Capitol and the rebels, Katniss provides Mockingjay with the requisite pathos, as well as some arrow-slinging action in a battle sequence that feels like a vaguely perfunctory throwback to the first two films. But she’s also strangely backgrounded in a movie that’s ostensibly all about her—a paradox that mirrors Katniss’ place in the rebellion. As integral as Katniss is to spreading the rebels’ message, she has little power over how both sides use her image to promote their causes, and little ability to join the action in the districts, since she needs to remain alive to be an effective Mockingjay. Director Francis Lawrence—returning to the series after upping its style and substance considerably in Catching Fire—and new-to-the-franchise screenwriting team Peter Craig and Danny Strong (Buffy The Vampire Slayer’s Jonathan) smartly juxtapose the action surrounding Katniss with the clashes between rebel and Capitol forces happening in the districts. Though neither Katniss nor any of District 13’s military force are present during these attacks, the influence of the rebel propaganda machine is made clear through affecting imagery and sound cues. These sequences also provide a welcome closer look at Panem’s districts. By occasionally turning the focus away from Katniss and District 13, and toward the masses they’re ostensibly inspiring, Mockingjay gets at some hard truths about war, specifically the fact that those who mastermind and incite social upheaval aren’t usually the ones dying on the front lines to realize it.

That fact isn’t lost on Katniss, who strains against the confines of her appointed position and exerts what power she can over President Coin, especially on Peeta’s behalf. Katniss’ fixation on Peeta—whom the Capitol keeps trotting out in TV interviews where he pleads for her and District 13 to stand down and give in to “peace”—underlines her terror that she, like him, is being used as a powerful weapon in a war over which she has little real control. It also re-spotlights the halfhearted love triangle between Katniss, Peeta, and Liam Hemsworth’s blander-than-bland Gale, who in Mockingjay has rapidly ascended the ranks of the District 13 military. With Peeta out of the main action, Gale’s role in Mockingjay is more substantial than in previous entries, but Hemsworth and Lawrence’s chemistry is as flat as ever. In a way, that’s a relief, as their would-be romance provides blessedly little distraction from the film’s emotional meat. With Hemsworth relegated to the role of brooding soldier, Lawrence can focus on translating the extreme and contradictory emotions Katniss wrestles throughout the film, which she does with heartbreaking veracity. And Hutcherson does more compelling work with Peeta in his limited screen time than he did in the first two films combined, perhaps because the character finally has something more interesting to do than protect and serve Katniss. (See The Reveal for more about that.)

Mockingjay does its franchise-mandated duty of incorporating pretty much every surviving minor character it can in some way or another, including Elizabeth Banks’ delightful Effie Trinket in a charming, albeit sadly toned-down appearance that adds little to the story besides welcome levity. (A choice line, referring to her attempt to fashion-up District 13’s mandatory grey jumpsuits: “Everything old is new again… including democracy.”) But the trifecta of Lawrence, Moore, and Hoffman is the movie’s driving force, from both a plot and performance perspective. Together, they imbue Mockingjay with a sense of gravity and significance befitting its tough themes. That gravity extends to the film’s visuals, which embrace a gray-on-gray-on-gray utilitarian aesthetic—with the occasional explosive burst of fire—that’s fittingly oppressive and evocative of war, but that might leave viewers pining a bit for the occasional relief provided by the garish Capitol spectacle and Arena-based action of previous entries.

But like Katniss, the series reached the point of no return the moment her arrow took down the Arena in Catching Fire, and Mockingjay ably plunges headlong into the dark recesses of an already dark series. It’s a well-executed, occasionally daring exploration of war, propaganda, and guilt that’s easy to watch, but occasionally difficult to stomach. The fact that it ends with the promise of more to come—in 2015, with Part 2—should fill viewers with equal parts anticipation and dread.