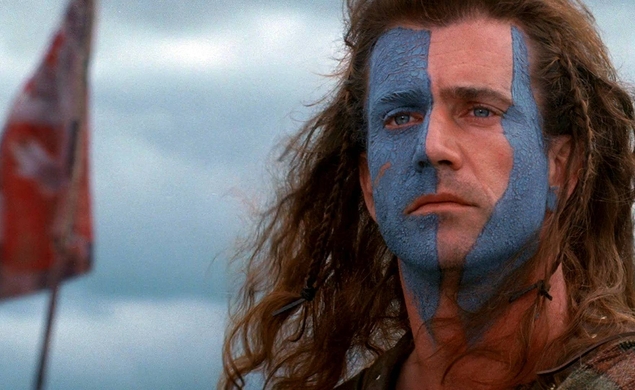 Confession time: I have somehow made it 20 years, 18 of which saw me working professionally as a film critic, without ever seeing Braveheart—the 1995 Academy Award-winner for Best Picture (and Best Director, with a few more wins to boot); the 81st best film, according to the users of IMDb; and, many might argue, a film of some note. I have, however, seen the movie Boat Trip, where Cuba Gooding Jr. plays a man who pretends to be gay on a gay cruise to get closer to the woman of his dreams, more than once.

My reasons for aggressively avoiding Braveheart have a lot to do with taste, but they’re also, to be brutally honest, deeply personal. Historical epics have never been my favorite genre, and I have a bit of an aversion to the kind of testosterone-poisoned machismo that powers Braveheart. But I was also ahead of the curve in hating Mel Gibson before it was popular. Even before hidden phone conversations and a drunk-driving arrest established Gibson as a popular candidate for Worst Person In The World (and, to use understatement, no friend of the Jews) and seemingly limited his choice of acting roles to insane super-villains, I found Gibson loathsome for his homophobia, far right-wing politics, and incredible arrogance.

But today, my sparkling 20-year streak of not seeing many 1995-era meatheads’ all-time favorite movie came to an end, a victim of professional obligation. And having now seen Braveheart, I now think me from 1995 to 2015 was right.

The first of the film’s crimes is flagrant historical inaccuracy. Screenwriter Randall Wallace and director-star Mel Gibson have rewritten history to make Gibson’s William Wallace even more preposterously heroic and his enemies even more evil, English, and gay. There is a special place in hell reserved for filmmakers, like Gibson here and Oliver Stone in JFK, who rewrite history for the sake of making the bad guys all screaming stereotypes of effeminate homosexuals.

Braveheart opens with the English defeating the Scottish in ways designed to not just defeat, but humiliate and destroy them. Evil King Longshanks gives his knights the freedom to have sex with the wives of Scottish noblemen on their wedding night, for example. That’s a dick move in more ways than one.

William Wallace doesn’t want an Englishman having sex with his wife on their wedding night, so he and love Murron MacClannough (Catherine McCormack) marry in secret, but the English murder her in retribution all the same. This really cheeses Wallace off and gives him an excuse to commit the most vicious manner of brutality. Because if you actively deny the humanity of the enemy, as Gibson does here, then any level of violence committed against them is justified. When you show the enemy as rapists willing to murder their own people and hang children and set people on fire, then no amount of force against them could be considered excessive.

As he himself conceded, Gibson is at least 10 years too old to play Wallace. He’s supposed to be a vibrant young buck in his 20s with a thick, glorious mane of Fabio hair, but because Gibson couldn’t get his three-hour-long historical epic without himself in the lead role, the lead is now clearly a man in his 40s who has lived hard and has the scars to show it.

Wallace leads an insurrection against the English, and to give Gibson his due, he is adept at staging large-scale battle sequences in viscerally exciting ways. Though it drags tremendously, Braveheart benefits from an epic scope, from the sense that worlds, not just armies and nations, are colliding, with everything at stake. Pauline Kael famously praised/condemned Straw Dogs as a fascist masterpiece, and while Braveheart is no masterpiece, at its red-blooded best, it’s exciting in its bloody excess in ways that are discomforting—the film occupies a world of black and whites, with no space for the grays that define our own.

Braveheart can be rousing, but more often it’s tedious, gratuitously violent, and filled with distracting modifications to history, like making Longshanks’ son a lisping, effeminate homosexual whose lover the King Of England tosses out the high window of a castle in what the film seems to see as a crowd-pleasing moment. The film sometimes suggests the world’s most violent romance novel—not just because of Gibson’s Fabio hair, but because of the way that Princess Isabelle, as played by Sophie Marceau, all but orgasms just hearing about how bravely and boldly William Wallace was willing to fight to avenge his slaughtered love. Braveheart feels incredibly padded at three hours, but it needs at least a half-hour for Wallace to die an endless, extravagant death that makes Jesus’ crucifixion seem as brutal a punishment as a ticket for jaywalking. Gibson’s martyr complex and need to suffer nobly onscreen requires an awful lot of time.

In the end, seeing Braveheart 20 years on was bound to be an anticlimactic experience, both because I was dreading it so and because in the end, time has reduced it to just a film—homophobic, reductive, overreaching, but exciting at times and artful in its brutality—and a mighty flawed film at that. History has placed both its strengths and its weaknesses in sharper context. It did not need Gibson’s fall from grace to seem creepy and vaguely fascistic. The ugliness that would pour out of Gibson’s mouth and be recorded for posterity was already there, in embryonic form, in the film’s conception of a world divided solely between heroes and villains, manly men whose blood rages with righteous nationalist pride and rapists and homosexuals who would kill their own people for the sake of maintaining power.