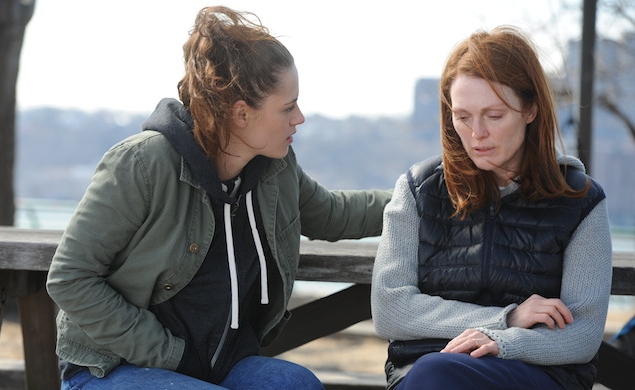 It seemed too depressing to present this week’s new home-video releases under the umbrella of “watch a bunch of movies that will make you cry,” not just because of the obvious reason (crying=sad), but because emotions remain forever relative, and although some of you may cry because Blackhat is such lower-level Michael Mann (I’m a Collateral girl, through and through), a few of you might get hung up on the more traditional tear-jerking pains of Still Alice. And then there’s Mortdecai, which I wouldn’t recommend to anyone, even on the basis of a joke like, “it’s so bad it will make you cry!” The Cobbler is available on Blu-ray and DVD combo pack, which is perhaps one of the most terrifying sentences about Adam Sandler I’ve ever written (and I reviewed That’s My Boy, so). Wipe away your tears, movie buffs, and let’s focus on the positive offerings from this week’s new releases. Let’s brighten up those shelves. Hey, is that a smile? Aw, you.

In preparation for this summer’s Jurassic World, the Jurassic Park Collection is now available on both Blu-ray and DVD (all three films are also now available on single Blu-ray discs, with added HD versions), while Wet Hot American Summer is now available on Blu-ray. That double-whammy should perk you right up. Looking for cinematic stimulation of another stripe? This week also features the release of some mighty sexy options, like Germany’s Beloved Sisters (a period piece about a pair of aristocratic sisters who fall for the same man that is ostensibly rooted in history), Stay As You Are (Nastassja Kinski’s first big breakout), and the wild The Strange Case Of Dr. Jekyll And Miss Osbourne, and that’s only the tip of the iceberg. Take a look (basically, I’m willing you to pick out titles likes Lust Of The Dead 4 and Snow Honeys)!