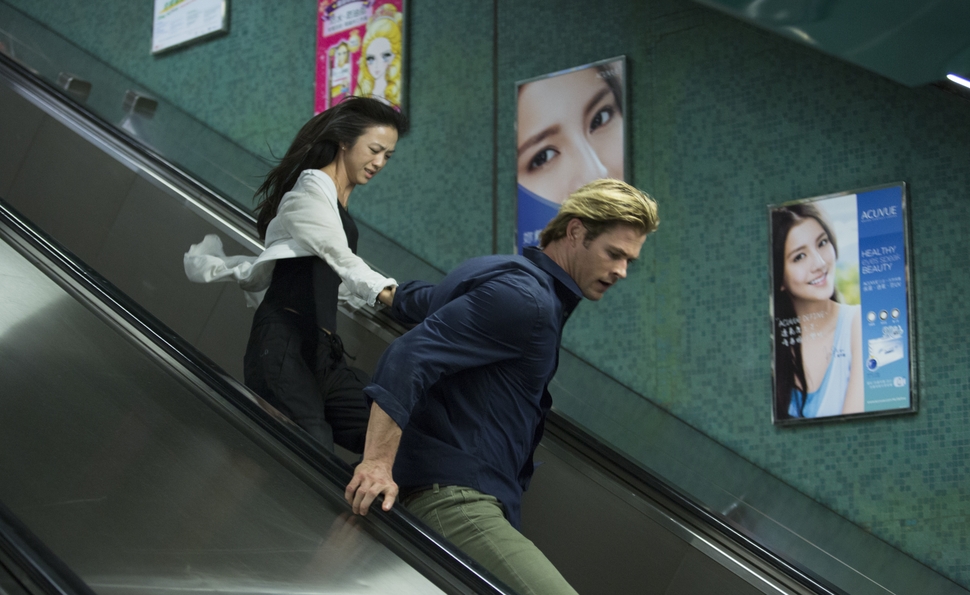 Michael Mann’s Blackhat never expresses itself more beautifully than in the opening moments, when the camera descends from above to catch the glittering lights of Hong Kong, then descends further to the glittering networks and circuit boards that a hacker is attacking from some unknown location. Through Mann’s lens, the world has flattened into an exciting, dangerous latticework, one where global citizens freely cross the porous borders between countries. Blackhat is a cyber-thriller, but for Mann, the thriller part is just the access point through which he can explore a changing world, and modify the themes that run through films like Thief, Manhunter, Heat, and Collateral. But where those previous films functioned as elegant, consummately skillful genre pieces, Blackhat gets hung up by an abysmal script and a trio of miscast actors in the lead roles. The foreground keeps getting in the way of the background.

The bones of a classic Mann film are very much present. His interest in skilled men who operate on both sides of the law comes through in the character of Nicholas Hathaway (Chris Hemsworth), a computer hacker serving 12 years for bank robbery. When another hacker triggers an explosion at China’s Chai Wan nuclear power plant, then manipulates soy futures to his favor, the feds turn to Hathaway—a crook to catch a crook. Much like William Petersen’s tormented detective in Manhunter, who pursues serial killers by adopting their mindset, Hathaway knows how rogue hackers operate, especially when it’s revealed that this one is using a retooled version of an old virus Hathaway created in college. The co-author of that virus is Chen Dawai (Wang Leehom), a Chinese agent who convinces the FBI task force, led by Carol Barrett (Viola Davis, giving by far the best performance), to release Hathaway from prison, despite the flight risk. Add in American suspicion of Chinese motives, and the mission to track down the nefarious hacker threatens to implode before it ever gets off the ground.

The other key member of the group is Chen’s sister Lien (Lust, Caution’s Tang Wei), who doubles as Hathaway’s love interest. The chemistry between the two is nonexistent, owing to the awkward hiccups of dialogue in Morgan Davis Foehl’s script and a plot so busy with activity that it renders the romance superfluous. Throughout a career rooted in the genre minimalism of filmmakers like Jean-Pierre Melville (Le Samouraï), Mann has worked to strip down his thrillers to clear, clean, refined elements, but Blackhat’s love story is underserved, while the plotting trails off into a confusing ball of proxies, coding, and stock manipulation. Where the robbery schemes in Thief and Heat were simple—high-tech smash-and-grab jobs, basically—the big score in Blackhat turns out to be a laughably byzantine jostling of the financial markets.

But while Blackhat may be the worst Mann film since his bizarre, misbegotten 1983 shocker The Keep, it’s still a Michael Mann film, and surface pleasures abound. This is one for the time capsule: Mann conjures his usual mood through nightscapes and synth music, but with a more global perspective, attaching himself to characters who are scaling the walls separating country from country and network from network. There’s freedom in this mobility, rendered in a mad dash between systems and places from Hong Kong to Los Angeles to Indonesia. There’s also hope in the productive mingling of cultures to solve a problem. (Or at least to knock boots.) And there’s the attendant threat of having one man at a computer terminal bringing the world to its knees.

Though the pacing is lumpy, to say the least, Blackhat occasionally bursts to life when Mann breaks out one of his signature action setpieces, which have the distinct pop of heavy artillery and the immediacy of video. From Collateral on, Mann has become one of the few directors willing to embrace digital video as video, not as a substitute for film, which denies a film like Blackhat the visual lushness of earlier work, but more closely connects his story to the lower-resolution tools of the day. It’s unfortunate that his inattention to the script and the performances takes much of the power away from the aspects of Blackhat that truly seem to compel him. As with Olivier Assayas’ corporate thriller Boarding Gate, the essential silliness of the story works against the director’s multinational ambitions. That’s the thing about genre exercises: They should look like more than exercises.