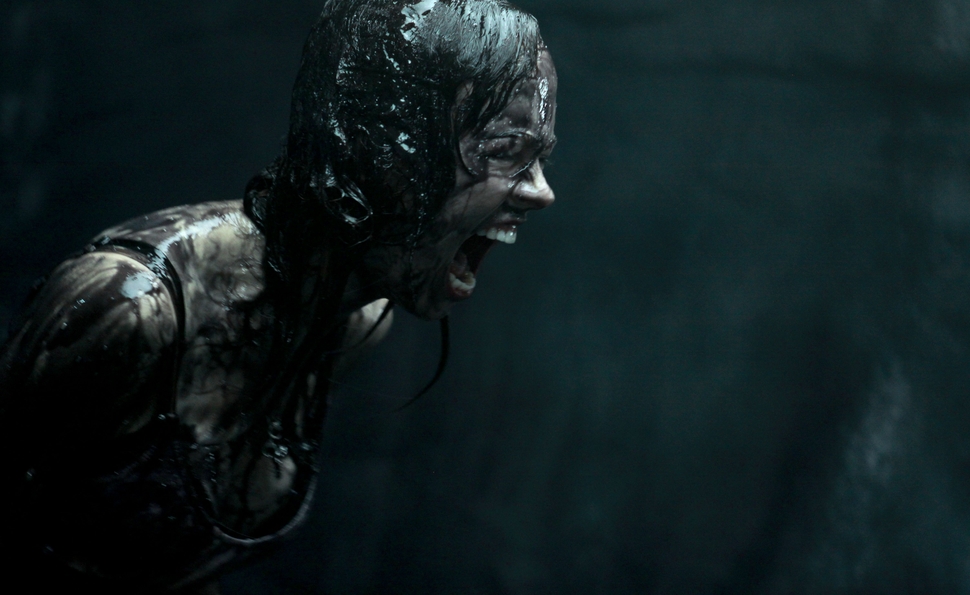 Given the speed with which cultural change generally happens, it’s surprising how durable the alien-abduction mythos has remained over the last several decades. Originally codified by the saga of Betty and Barney Hill in 1961, and re-popularized by Whitley Strieber’s Communion (and its film adaptation) in the late 1980s, the basic idea—that human beings are being systematically captured, probed, and released by hairless, gray-skinned creatures with spindly limbs and giant black wraparound eyes—has barely shifted at all since then, whereas our collective sense of vampires and other fantastical creatures has rapidly mutated many times over. So it’s no surprise that the enjoyably schlocky new horror film Extraterrestrial serves up every trope in the alien-abduction playbook, at one point even showing some poor dude’s ass on the verge of being scientifically violated. There’s absolutely nothing new or innovative to be found here, but sometimes it can be almost comforting to watch a movie do an unironic tour of the classics.

Directed (without any onscreen credit) by Colin Minihan, who co-wrote the film with Stuart Ortiz—they bill themselves as The Vicious Brothers, though they aren’t related—Extraterrestrial even has the chutzpah to kick off with a standard Cabin In The Woods scenario. April (Brittany Allen) and her steady beau Kyle (Freddie Stroma) are the primary couple; utility players include obnoxious bro Seth (Jesse Moss), spunky pothead Melanie (Melanie Papalia), and ditzy blonde Lex (Anja Savcic). Arriving at, yes, a cabin in the woods, they engage in some minor emotional drama—including April’s reluctant rejection of Kyle’s surprise marriage proposal—before being interrupted by something streaking across the sky and crash-landing near the property. The wreckage, when they find it, looks exactly like a traditional saucer-shaped UFO, and there are some decidedly non-human footprints heading back in the direction of their cabin.

The Vicious Brothers have some fun with what’s essentially a slasher movie featuring homicidal aliens, throwing in Gil Bellows as a sheriff whose girlfriend mysteriously vanished a decade earlier, and Michael Ironside as a local pot farmer with inside knowledge about the secret treaty between the aliens and the U.S. government. (Shooting them is a no-no, turns out.) Despite being biologically ludicrous—the chance of an alien species looking remotely this humanoid is close to zero, even when convergent evolution is taken into account—the prototypical “gray” design remains eerily effective, and these particular grays are augmented with such unearthly powers as mind control, making them forbidding indeed. A moment in which the presence of their huge spaceship overhead is signaled by a rainstorm that’s only happening several yards away is chillingly effective, and the Brothers derive ghoulish comedy from one character’s efforts to avoid being sucked into the craft’s weird tractor beam of fluid light by handcuffing himself to a tree branch. This strategy does not work out as intended, to put it mildly.

Unfortunately, the Viciouses can’t fully breathe life into their main quintet, all of whom remain one-dimensional types crying out for Drew Goddard and Joss Whedon-style lampooning. Papalia, who previously played the lead in the cyber-horror flick The Den, manages to put a snarky spin on some of Melanie’s lines, but Seth is merely unpleasant, Lex barely exists, and there’s little rooting interest in the relationship between April and Kyle, which ultimately becomes the focus of Extraterrestrial’s surprisingly cheesy third act. (Maybe poor Kyle is husband material after all!) While the sap is counteracted to some degree by a deeply cynical ending, said ending is itself compromised by having been baldly swiped, with only minor (and even more cynical) modifications, from the jarring conclusion of one of the most famous horror movies ever made. Playing around with archetypes is one thing; replicating one of cinema’s most indelible moments is another.