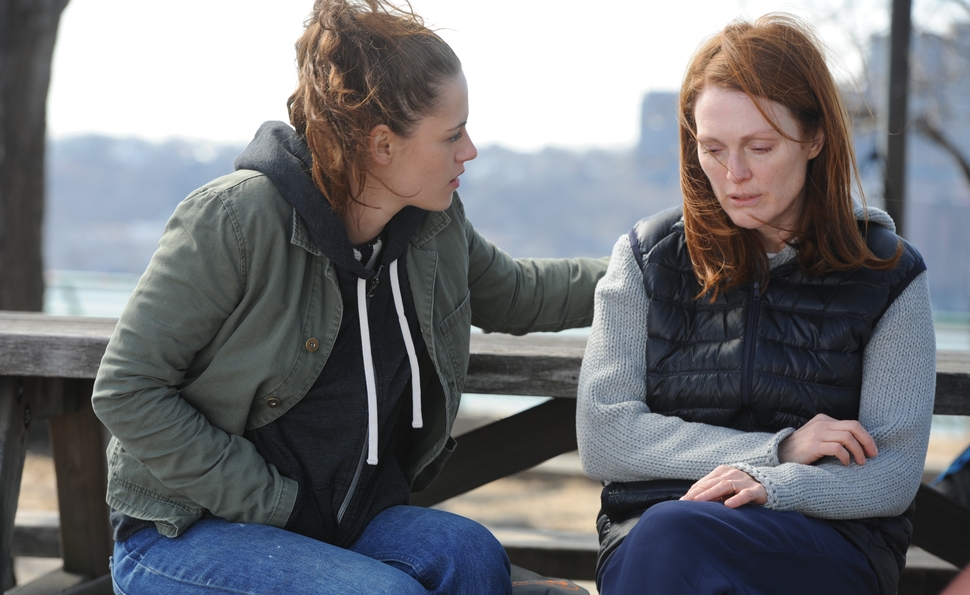 In Still Alice, a celebrated Columbia linguistics professor gets diagnosed with an aggressive form of Alzheimer’s, makes a valiant attempt to hold onto her memory and her dignity, then stands by helplessly as the disease dismantles her life. That’s it. That’s the movie. Much like Michael Haneke’s Amour, Still Alice has no illusions about what Alzheimer’s can do, both to the victim and to the victim’s family, who are present for the agonizing, day-by-day process of watching their loved one slip slowly away from them. For the purposes of movies like Still Alice and Amour, the disease has a built-in three-act dramatic mechanism: Early signs and diagnosis, treatment and decline, the inevitable letting go. So it’s on the dramatist to figure out something original or insightful to say about Alzheimer’s and its impact on a person’s life and family, and that’s where Still Alice suffers from a failure of imagination. It’s undeniably moving, but straightforward to a fault.

Adapting Lisa Genova’s 2007 bestseller, writer-directors Richard Glatzer and Wash Westmoreland do get a career-best—or career-best-equivalent, anyway—performance out of Julianne Moore as Alice, an academic whose intelligence and ingenuity are cruelly turned against her. Now in her 50s, Alice shares a beautiful home with her equally ambitious husband John (Alec Baldwin) and has three grown children, two of them settled professionals (Kate Bosworth and Hunter Parrish), and the youngest (Kristen Stewart) a struggling actress. When the first signs of Alzheimer’s make themselves known—a forgotten item here, a hiccup in a class lecture there—it’s easy enough to brush them off as standard-issue middle-age forgetfulness. But as her condition worsens, both before and after her diagnosis, Alice comes up with ingenious systems that help her remember things, while obscuring the speed of her deterioration from others and from herself. Before she falls away entirely, though, she has to live with the revelation that her strain of Alzheimer’s is hereditary, so she may have passed it to one of her children.

The relationship between the progression of Alice’s disease and her methods for coping with it is the most heartbreaking element of Still Alice, because it speaks to her brilliance at problem-solving and its utter uselessness in stemming the disease’s pace. She’s like Guy Pearce in Memento, devising little notes and breadcrumb trails to fill in the gaps, but Pearce has largely fixed his short-term memory problem, while Alice’s memories (and basic functionality) are draining through a sieve. Moore handles the role beautifully, emphasizing Alice’s fastidiousness and dignity as they unravel against her will. Though Stewart’s performance is bound to be overshadowed, she’s every bit as good as the black-sheep daughter who feels a tug of responsibility as Alice’s husband and other children grow more distant.

Glatzer and Westmoreland, whose spotty filmography includes the gay comedy The Fluffer and the recent Errol Flynn biopic The Last Of Robin Hood, go light on any artistic flourishes. Glatzer was diagnosed with ALS in 2011, and the directors seem to share an instinct to make this story as honest and unfussy as possible. But they still prod too much for emotional effect, and they so studiously avoid commentary on the family’s extreme wealth and privilege that Alice’s loss of the good life seems too central a part of the tragedy. So much of Still Alice rings true, but there’s a thinness to it that makes it shrink in comparison to other films about the disease, like Amour or Sarah Polley’s Away From Her. Alice’s condition only accounts for some of its air of inevitability.