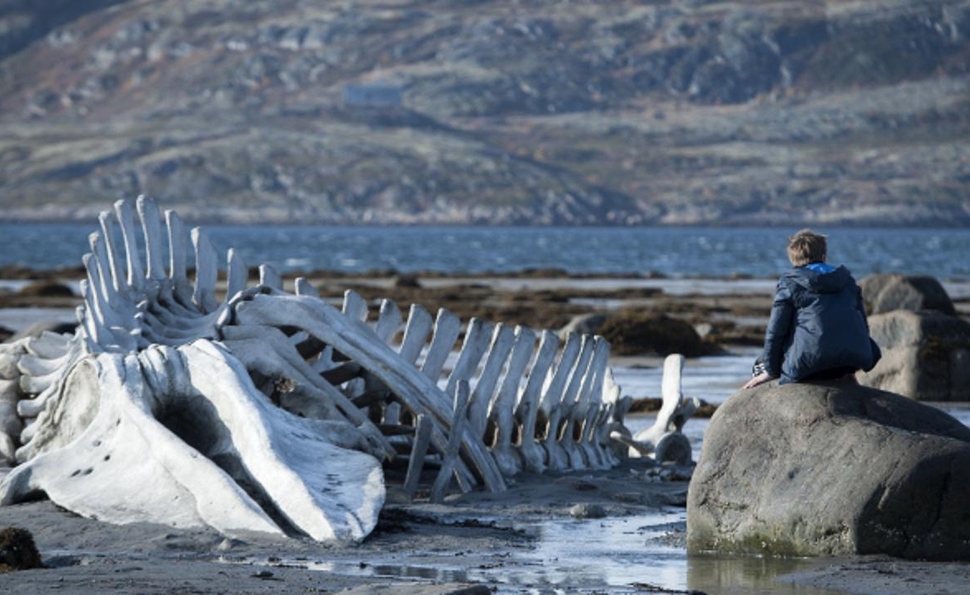 Like Björk in Dancer In The Dark, I’ve seen it all. The last of this year’s 18 Competition titles, Clouds Of Sils Maria, screened this morning, effectively bringing the 67th Cannes Film Festival to a close, although repeat screenings continue through Sunday, and I’ll likely be catching up with a few sidebar films. Happily, it ends on a strong note, as Clouds is a typically smart, incisive, beautifully crafted analytical exercise from Olivier Assayas, serving as a companion piece to both Irma Vep (with which it shares a knowing film-world milieu) and to Summer Hours (in its poignant juxtaposition of generations). Much of the film is a glancing two-hander involving a famous actress, Maria Enders (Juliette Binoche), and her young personal assistant, Valentine (Kristen Stewart), both of whom set up camp in a Swiss château to rehearse a play in which Maria has reluctantly agreed to star opposite Hollywood’s newest flavor of the month, Jo-Ann Ellis (Chloë Grace Moretz). The (fictional) play, Maloja Snake, was Maria’s launching pad two decades earlier, when she originated (first onstage, then onscreen) the role of Sigrid, a scheming, manipulative social climber who seduces, then discards, a middle-aged business exec named Helena. Now Maria has been asked to play Helena, with whom she doesn’t remotely identify, and the Sigrid/Helena dynamic is reflected in the increasingly prickly relationship between Maria and Valentine, as the latter reads Sigrid’s lines during endless run-throughs.

Assayas is much too savvy to make the life-imitates-art parallels exact, and the introduction (late in the film) of Jo-Ann, whose offscreen life echoes that of Lindsay Lohan, complicates matters considerably. All the same, this is a relentlessly brainy film that more or less interprets itself as it goes along—even the ambiguous fate of one character is prefigured, just a moment earlier, by discussion of what befalls one of the characters in Maloja Snake. Unlike the more cinema-focused Irma Vep, which sometimes feels as if Assayas is making it up as he goes along, Clouds Of Sils Maria, which skews more theatrical (though there’s plenty of acidic commentary on the lives of movie stars and their retinues), is too carefully worked out to be particularly intuitive, or to allow viewers much freedom. At the same time, its portrait of an aging actress’ creeping insecurity makes Maps To The Stars look even more shallow in retrospect. (Funnier than everything in Cronenberg’s film: Maria’s spit-take when Valentine starts to praise a Hollywood blockbuster with the words “Despite her superpowers…”) Binoche does solid if sometimes slightly mannered work in the showcase part, but the movie ultimately belongs to Stewart, who wisely refrains from trying to sell Valentine’s Sigrid-like role in Maria’s life; it’s a relaxed and unshowy yet deeply felt performance, conveying volumes with fleeting gestures. Only someone with tremendous self-confidence could underplay so beautifully.

Unfortunately, there appears to be less subtlety than I’d hoped in Leviathan, though it’s still my favorite film to date by Russian director Andrey Zvyagintsev (The Return, The Banishment, Elena). In the past, I’ve found his work stiflingly rigid, but he’s loosened up considerably here, though he still kicks off things off with a series of painterly landscape shots, set to Philip Glass’ keening score for his opera Akhnaten. The story involves a family living on Russia’s northern coast whose land has been seized, apparently via some form of eminent domain, and with marginal compensation, by the town’s corrupt mayor (Roman Madyanov); Kolia (Alexey Serebryakov), an auto mechanic, has enlisted the help of a lawyer friend from Moscow, Dmitri (Vladimir Vdovitchenkov), to help him out, even if that means blackmailing the mayor with evidence of his misdeeds. After some reflection, it now seems clear to me that Leviathan is “merely” intended as a cynical, sometimes darkly comic take on the futility of fighting City Hall, and it’s brutally effective on that score… even though that score, like the use of Philip Glass, feels overly familiar. I say “merely,” though, because Zvyagintsev, who employs a beached whale skeleton half-buried in the sand as his central metaphor, cuts closer to the bone when he explores—or pointedly doesn’t explore—his characters’ subterranean emotions. Actions frequently seem to come out of nowhere, because the film hasn’t foreshadowed the thoughts and feelings that precipitate them in any way; everyone’s interior monologue remains stubbornly interior, revealed only in behavior. Had one character who’s accused of a crime toward the end actually committed said crime, Leviathan would be less of a straightforward downer and more of an enquiry into the forbidding mysteries of the human heart, and I’d like that film considerably better. But the one Zvyagintsev made is solid, too.

Do I have anything to say about Jimmy’s Hall besides “Did the world really need Ken Loach’s Footloose”? To my surprise, people seem to be responding affectionately to what’s reportedly Loach’s last “big” film (he says he may continue to direct documentaries and/or very small-scale indies), and there’s no question that it features plenty of crowdpleasing elements, most notably a clear-cut delineation between… Well, not good and evil, I suppose, but at least righteous and misguided. Set in 1932 Ireland, about a decade after the events depicted in The Wind That Shakes The Barley (for which Loach won the Palme d’Or here eight years ago), it tells the true story of Jimmy Gralton, who was railroaded out of the country by the Catholic church for the crime of running a community center where local kids could dance to their devil music (ooh, jazz!) and take classes not sanctioned by the Pope. It’s a typically warmhearted, rousing effort, with only trace amounts of leftist anger, but I just couldn’t get past the broad caricatures that populate it. Apart from Jimmy himself (Barry Ward)—who’s meant to be a fiery, charismatic leader, but comes across like, well, the head of a local community center—everyone who frequents the hall behaves as if they’ve just arrived from central casting to help Mickey and Judy put on their show. Meanwhile, the antagonistic priest, Father Sheridan (Jim Norton), preaches to his congregation about “the Los Angelization” of Irish culture, at one point asking them, with genuine incredulity, “What is this obsession with pleasure?!” John Lithgow couldn’t have said it better, but Ward is no Kevin Bacon, and this historical trifle, like many of Loach’s recent films (The Angels’ Share, Looking For Eric), doesn’t belong anywhere near Cannes Competition.

Finally, just a quick word on Wim Wenders’ stirring documentary The Salt Of The Earth, which he co-directed with Juliano Ribeiro Salgado. The film’s subject is Ribeiro Salgado’s father, Sebastião Salgado, an acclaimed Brazilian photojournalist who’s spent most of his life chronicling the lives of the downtrodden: famine victims in the Sahel region of central Africa, massacred Tutsi in Rwanda, manual laborers just about everywhere. That might sound like a major bummer, but Salgado’s photographs, which account for the majority of the film’s running time (and which he annotates in voiceover), are truly remarkable, and while The Salt Of The Earth functions mostly as a substitute for attending several exhibitions or leafing through a number of coffee-table books, it’s at least a visually compelling experience, which is more than can be said for most documentary portraits of artists. Many of the images are haunting enough to invade viewers’ dreams; it’s a relief when Salgado decides to move in a more optimistic direction, chronicling, in a project called Genesis, the roughly 50 percent of the planet (a surprising figure, since it doesn’t include oceans) that remains largely untouched by man. It’s been ages since Wenders made a watchable narrative film, but his alternate career in docs is going swimmingly.

Tomorrow: My useless predictions for the awards (which are being presented a day earlier than usual, due to the European election), along with my personal choices in each category, were I the sole juror.