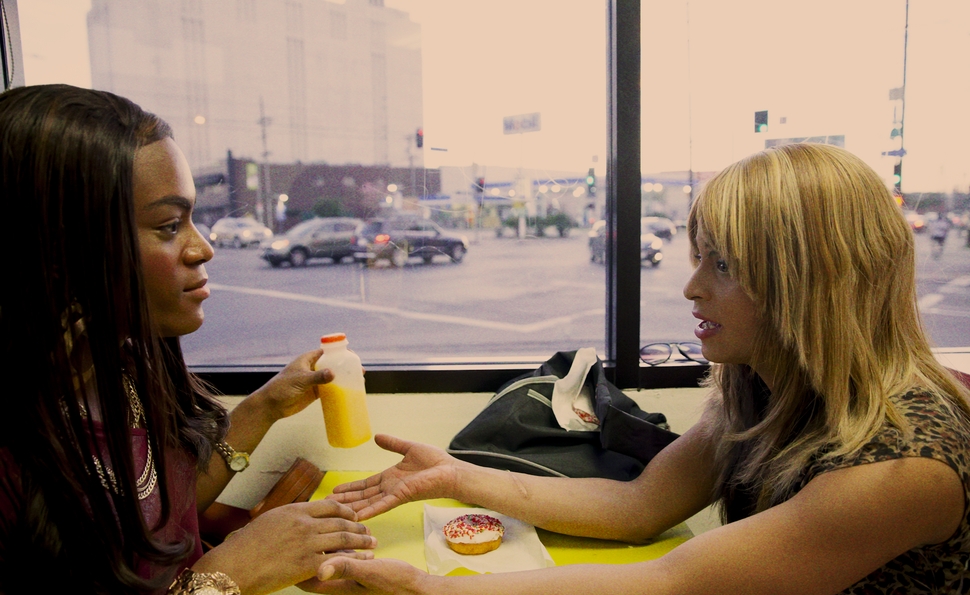 Why Tangerine could be a turning point for transgender actors

“Transmisogyny does not deserve an award!” an audience member shouted, interrupting Jared Leto. Again and again she shouted, until she was heard: “Transmisogyny does not deserve an award!” This was, per The Hollywood Reporter, at a ceremony in Santa Barbara, California. It was February 2014, and Leto was sweeping through the awards circuit, receiving statuettes and ample acclaim for playing the HIV-positive Rayon in Dallas Buyers Club. “You don’t deserve an award for portraying a trans woman!” the protester added. A few weeks later, Leto won an Oscar for the same role. But that brief interruption attested to a mounting, years-old frustration with performances like Leto’s and the laurels they garner. Here’s a cis man heaped with accolades for tackling such a challenging part, while transgender women like the one he’s playing remain conspicuously absent from major film roles.

Over the past 40 years, at least one actor has been Oscar-nominated for playing a trans character every decade. The trend includes actors like Chris Sarandon (Dog Day Afternoon), John Lithgow (The World According To Garp), Felicity Huffman (Transamerica), and Hilary Swank (Boys Don’t Cry). While the caliber of their performances may vary, every one of them has helped determine how trans stories get told onscreen, to the exclusion of those whose stories they’re telling. Opposition to cis actors playing trans characters has been growing during the past decade, however, as online platforms have let activists’ voices snowball. Recently, the discrepancy has even begun to draw attention from the actors it benefits. “I think transgendered [sic] people have been marginalized for a long time,” Huffman told The Huffington Post last year. “And I think you see that in people who are not trans playing them.”

When interviewed by The Telegraph in February 2015 about an upcoming role as real-life trans artist Lili Elbe in The Danish Girl—a role once intended for Nicole Kidman, who dropped out after shooting delays—newly minted Oscar winner Eddie Redmayne was circumspect. “There is an incredibly valid discussion for why a trans actress isn’t playing the part,” he conceded, “because there are so many brilliant trans actresses.” Meanwhile, those same trans actresses are starting to be seen in an eclectic string of TV shows and movies that stand as alternatives to the Oscar-blessed cis-playing-trans tradition. These have included Netflix original programming like Orange Is The New Black and Sense8, as well as the under-the-radar titles Gun Hill Road, Drunktown’s Finest, and Boy Meets Girl. Trans artists have been making strides in the avant-garde, too, as exemplified by Vika Kirchenbauer’s short “Like Rats Leaving A Sinking Ship.” Now, this list is joined by the new film comedy Tangerine, from Starlet director Sean Baker. 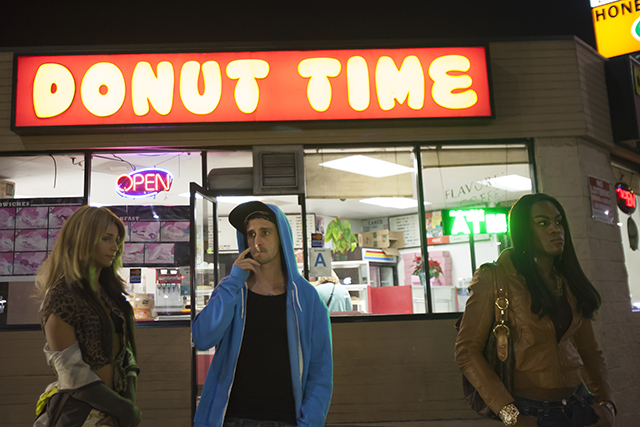 Tangerine’s stars are a pair of first-time actresses, Kitana Kiki Rodriguez and Mya Taylor. They play, respectively, Sin-Dee and Alexandra, two Los Angeles sex workers and best friends. The film covers one Christmas Eve from noon to night as Sin-Dee hunts down her boyfriend and his new squeeze, while Alexandra prepares for a gig singing at a nightclub. The two women are sharp-tongued, brash, and ready with invective. They’re also transgender, like the actresses who play them, a fact casually alluded to in early dialogue. (“God gave me a penis,” Sin-Dee gripes. “That’s pretty damn cruel, don’t you think?”) Neither character is required to prove her womanhood or her humanity. Nor must they bare themselves to audience scrutiny. Instead, the film accepts their identities at face value, then rolls along with plenty of economy and momentum.

As Sin-Dee and Alexandra hurry between various run-ins by foot, bus, and taxi, their only weapons are dry wit and a penchant for roughhousing, which align them with comic heroines dating back to Ginger Rogers. Tangerine doesn’t merely center a pair of black trans women as its protagonists, it lets them be funny, too. That becomes a rejoinder to every hack comedian or lazy sitcom out there that reduces these kinds of characters to a collection of stereotypes. Early on, a customer asks Alexandra to perform a service he hasn’t paid for, and she balks; when he fires back with the tired line, “You know you want it,” she arches her eyebrows, and her lips curl into a deadpan grin. Then, with withering sarcasm: “You see right through me, don’t you?” The shoe, at last, is on the other foot.

The same applies to a subplot involving the cab driver Razmik, who keeps his frequent dealings with the protagonists secret from his wife. The fear that straight men might be attracted to trans women has long been fodder for advice columns and tabloid talk shows. Tangerine turns that fear inside out by presenting it from the desired woman’s point of view. When she’s the one dominating the movie and driving its plot, it’s a lot harder to see her as a sex object, or see his desire for her as pathological. During the film’s climax, Razmik’s family tangles with Sin-Dee and her boyfriend, but instead of opting for melodrama or polemic, Tangerine sticks with hyperverbal comedy. The characters simply speak their minds, stridently and at cross purposes, with no moral judgments imposed on them by the filmmakers. The film concludes with a reaffirmation of the same value it starts with: friendship between these two women.

It’s a modest point to make, but that’s part of Tangerine’s charm. Baker and co-writer Chris Bergoch weren’t bent on teaching an inspirational lesson or making a statement. They just tell a set of tartly funny stories with on-the-fly fleetness, emphasized by the iPhone-shot street photography. It’s worlds away from the staid likes of Dallas Buyers Club, and while neither Rodriguez nor Taylor appear likely to net any Oscars for it, Tangerine is right in a vanguard of movies starting to shake up a transphobic status quo. Change, especially industry-wide change, is grueling. It moves at a snail’s pace, and requires people with power willing to take risks. Here’s just such a risk: a gamble on a couple of unproven actresses that paid off in the form of two spiky, hard-to-shake performances.

The question now, and over the coming years, will be whether other filmmakers can follow Tangerine’s lead and get more trans performers onscreen. Critic Willow Maclay optimistically calls Sense8 a “springboard moment,” explaining that “in the last few years there have been significant strides in the mainstream media regarding our lives, but things still have an exceedingly long way to go.” It may take some imagination about what movies can be like, who can be in them, and how to fund them. It may take sustained cooperation between artists, audiences, and critics. But the payoff will be tremendous: movies that can show a broader, richer world within the confines of their frames. Eventually, Tangerine could become one movie among many—good, bad, happy, sad, mainstream, or experimental—building an expanded onscreen picture of transgender life. It may be a small, speedy, low-budget feature, but that’s exactly the type of movie that can spark a revolution.