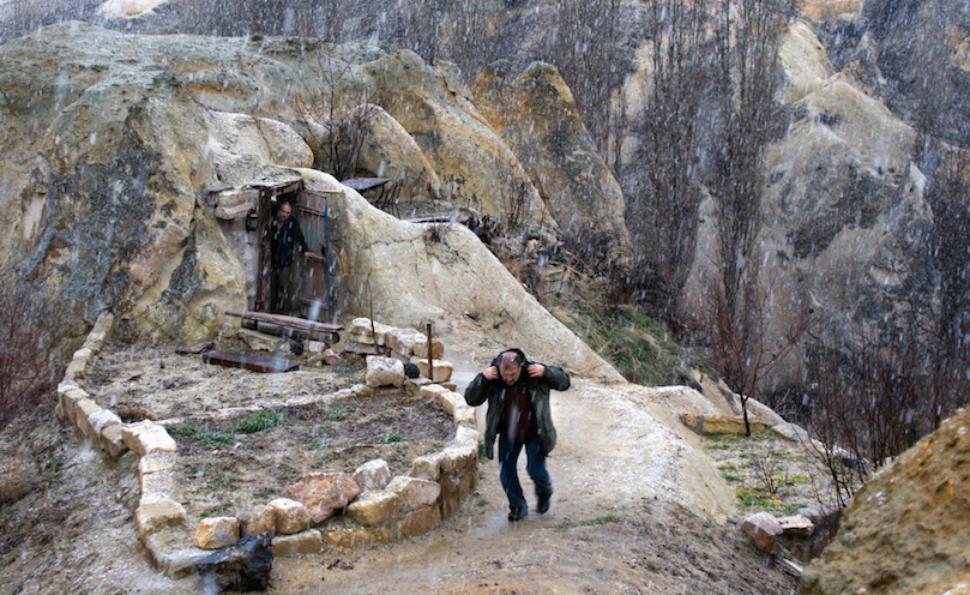 Apparently there was a bit of a rugby scrum here at Cannes yesterday afternoon. I didn’t see the fracas myself, because I arrived at the Grand Théàtre Lumière nearly an hour early, just in case it was necessary (as it has been many times in the past) to explain to some poker-faced guard, in my limited French, that journalists are indeed permitted to attend this particular afternoon screening. Turns out I sailed past security for once, but some of my colleagues who arrived later weren’t so lucky. Even though the Lumière is massive, with more than 2,200 seats, lots of critics got shut out; bigwigs from Variety and The New York Times reportedly had to plead for one of the few remaining vacancies. And what were we all so frantic to see? A three-hour Turkish drama by a filmmaker who’s probably best known in the U.S. for Climates—not for the film itself, mind you, but for its verbal appearance in the Coen brothers’ short “World Cinema,” in which Josh Brolin asks the usher whether it has any livestock in it.

Winter Sleep will very likely be seen by few people if and when it opens Stateside, but here in Cannes, the new Nuri Bilge Ceylan picture is a major event. In part, I suspect, that’s because it’s the longest film in Competition (at three hours and 16 minutes)—there’s a natural tendency for people to assume that longer = grander, better, more important. Ceylan seems to have bought into that idea himself, frankly. His seventh feature is an epic portrait of a complete prick: Aydin (Haluk Bilginer), the wealthy, sixtyish owner of a rustic hotel carved into the side of a mountain in a spectacularly gorgeous Anatolian location. For a long while, Aydin seems like a decent enough fellow, friendly with his guests and reluctant to interfere in a dispute between his gofer (Ayberk Pekcan) and the pissed-off tenant (Nejat Isler) of a building he owns. This initial hour of the film is relatively light on dialogue, heavy on majestic exteriors, and flat-out terrific, fashioning a vividly isolated world in which anything might happen. What actually happens, however, is that Aydin spends the next couple of hours indoors, engaged in endless petty bickering with his sister (Demet Akbag), who’s unimpressed by the op-ed columns he writes for a local newspaper, and isn’t afraid to say so, and his much younger wife (Melisa Sozen), who’s grown to despise him, and merely wishes to be left alone with her charitable work. These repetitive, circular arguments last perhaps 20-30 minutes, in real time, and while Aydin reveals himself in each of them as a selfish, passive-aggressive, uncaring, narcissistic asshole, Bilginer’s magnificently unsympathetic performance can’t maintain interest throughout Ceylan’s onslaught of subtext-free yakkity-yak. Considered in retrospect, Winter Sleep is an impressive achievement, admirable in every way, but I’d be lying if I claimed it wasn’t frequently an endurance test. Some movies really are just too damn long.

As it happens, that’s also the case with Bertrand Bonello’s Saint Laurent, which clocks in at about two and a half hours. Like Mr. Turner, this is a truncated, episodic example of the biopic form, kicking off with its subject already world-renowned—there’s no “You’ve cracked it wide open!” nonsense here—and flitting freely from one seemingly random interlude to the next, with little regard for any Wiki-derived checklist of key events. What it lacks, unfortunately, is a point of view, or any apparent reason why Bonello felt compelled to tackle one of the world’s greatest fashion designers. As played by Gaspard Ulliel (best known as the young Lecter in Hannibal Rising), Saint Laurent is a hedonistic workaholic—seemingly an oxymoron, but he makes it work somehow—with an enigmatic smile and… Well, that’s about it, actually. Bonello doesn’t seem particularly interested in the man himself, but neither does he revel in period decadence (the film is set mostly in the ’70s) as much as one might expect from the man who directed House Of Pleasures. Individual sequences are beguiling and amusing—I perked up a bit early on, when the film leaped past the turbulent years of 1968 and 1969 via a split-screen montage that places newsreel footage on the left and runway models on the right—but they don’t add up to a coherent vision, and Saint Laurent’s eventual downslide into drug abuse is extremely Behind The Couture. Only in the home stretch, when Bonello suddenly starts jumping back and forth between the younger Saint Laurent and his elderly counterpart (played by Helmut Berger), does the film finally start to look purposeful. By then, however, more two hours in, it’s too late.

As the new kid on the Competition block, Argentina’s Damián Szifron wasn’t taking any chances. His Wild Tales consists of six unrelated shorts, none of which lasts long enough to wear out its welcome; each features a grabber of a concept, some amusing complications, and a final sting. In theory, all six are revenge-centered, but thematic continuity is minimal, and they work primarily as self-contained units. The funniest of the lot involves an especially brutal case of road rage, in which a driver regrets flipping a fellow motorist the bird when he gets a flat tire further down the highway. Other scenarios include: strangers on an airplane who discover they all know the same person; a demolition expert (Ricardo Darín) whose life spirals out of control when he can’t accept a mistaken parking ticket; and a bride (Erica Rivas) who discovers during her reception that her new husband has been cheating on her—with one of the guests, no less. Some of these mini-stories pack more of a punch than others, but Szifron keeps each one moving briskly toward its destination, demonstrating a flair for black comedy and a welcome—especially in this context—handle on narrative economy. What Wild Tales is doing in Competition is anybody’s guess, as it’s far too lightweight and frivolous to merit any sort of awards consideration; maybe it was the only Spanish-language option (though Jaime Rosales has a film in Un Certain Regard), or maybe selection honcho Thierry Fremaux just wanted to do some counterprogramming. In any case, it makes for a fine introduction to a heretofore little-known filmmaker (this is Szifron’s third feature), and it’ll be interesting to see what he comes up with when he has to sustain a narrative for more than 25 minutes.

Tomorrow: Tommy Lee Jones returns to the director’s chair with The Homesman, starring himself and Hilary Swank. Plus, I’ll hopefully be checking in with American indie filmmaker David Robert Mitchell, whose lovely The Myth Of The American Sleepover won me over here a few years ago.

Mike’s day-one coverage of Cannes covered Nicole Kidman in Grace Of Monaco and the latest from Mike Leigh. Day two suggests putting Atom Egoyan out to pasture, and checks in with Israel’s Keren Yedaya.