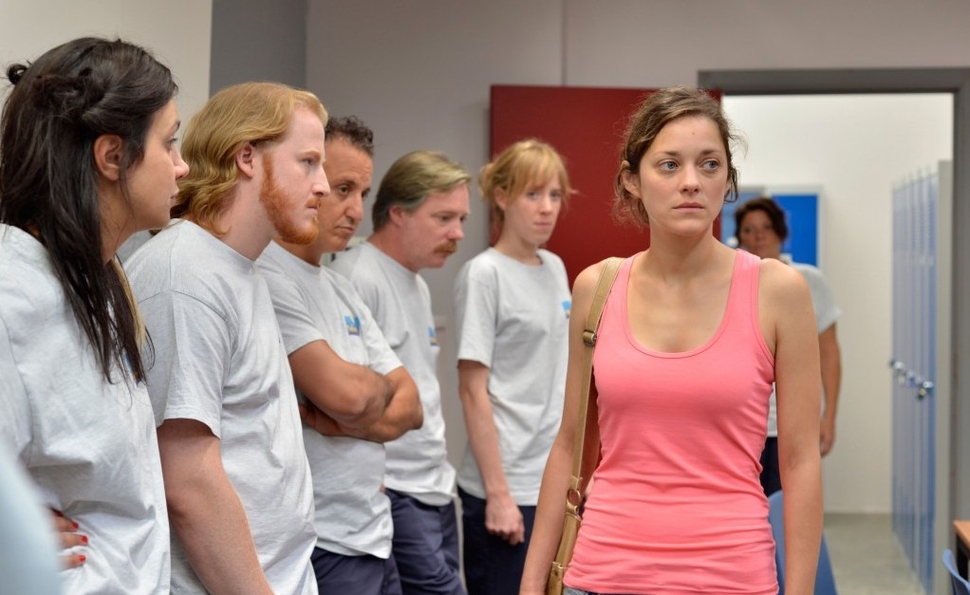 Jean-Pierre and Luc Dardenne are the most reliable filmmakers in Cannes’ history, and possibly in the history of the world. Since 1996, they’ve brought a feature here every three years, like clockwork: 1996’s La Promesse, 1999’s Rosetta, 2002’s The Son, 2005’s The Child, 2008’s Lorna’s Silence, 2011’s The Kid With A Bike, and this year’s entry, Two Days, One Night. That regularity alone deserves some sort of special commendation, given the vagaries of financing. What’s more, every one of these films since Rosetta has been in Competition (La Promesse screened in the Directors’ Fortnight); every one of them has won a prize from the jury (with both Rosetta and The Child taking the Palme d’Or); and every one of them has been good to terrific (désolée, les haters, Lorna rules). The Dardennes are like deeply empathetic automatons of cinematic excellence. It’s almost annoying, frankly.

Well, prepare to be annoyed by their mastery yet again. Two Days, One Night stars Marion Cotillard—the first movie star the Dardennes have ever cast in a leading role—as Sandra, an employee at a small firm that makes solar panels. Before the movie begins, Sandra takes a leave of absence to combat clinical depression; when she tries to return to work (also before the movie begins), the boss, claiming to be strapped for cash, forces her 16 co-workers to choose between receiving their annual bonus (about $1,400 at the current exchange rate) or letting Sandra keep her job. The initial vote was 14-2 against Sandra—or, more accurately, in favor of money—but a colleague has talked the boss into holding a second vote on Monday morning, by secret ballot this time. That gives Sandra the weekend to drum up the seven additional votes she needs to remain employed, which she reluctantly tries to do by knocking on doors and asking her friends to give up their bonuses on her behalf.

Imagine the fortitude required to make that request. Now imagine watching someone do it more than a dozen times. The Dardennes use this admittedly somewhat contrived scenario to fashion a magnificently complex cross-section of humanity, with each of Sandra’s co-workers occupying a slightly different place on the continuum from altruism to selfishness. Cannily, the brothers have made Sandra not some go-getting Erin Brockovich/Norma Rae type, but a woman who’s still battling depression and sometimes barely even has the energy to stand, much less beg for what seems to her like charity. Cotillard’s defeated-yet-persistent performance here eclipses her Oscar-winning work in La Vie En Rose, and she’s ably supported not just by Dardennes regular Fabrizio Rongione, as Sandra’s endlessly supportive husband, but by a stellar cast of unfamiliar faces who represent… well, all of us, at our best and worst. I tend to bridle when the word “humanism” gets tossed around in film reviews, but the extent to which Two Days, One Night (which deserves a less prosaic title) embraces humanity, in all its alternately affirming and debilitating messiness, genuinely feels profound. At this moment, I feel like it may be the Dardennes’ best film to date. But ask me again in exactly three years.

Readers may also want to check back with me later regarding Pascale Ferran’s goofily astonishing Bird People, about which I’m reluctant to say much for fear of spoiling the singular, WTF experience of seeing it cold. Following a sublime opening sequence that eavesdrops on the mundane conversations and thoughts of passengers on a Paris Métro train, the film unfolds in two distinct parts. The first features The Good Wife’s Josh Charles as Gary, an American who abruptly decides, in the middle of an extended business trip, to quit his job, leave his wife and children, and otherwise divest himself of pretty much his entire accumulated life up to this point. An ordinary film would handle this quickly and efficiently, so the story it kicks off can get underway; here, Gary’s decision is the story, and Ferran insists on watching him deal with its practical details (all handled from his room at the Hilton near Paris’ Charles De Gaulle Airport), whether it’s working out the legal ramifications with his lawyer (Clark Johnson) or breaking the news to his wife (Radha Mitchell) via an epic all-night Skype session.

Meanwhile, a slightly flighty maid at the Hilton, Audrey (Anaïs Demoustier), takes an interest in Gary while cleaning his room, and the film’s second half, devoted to her, seems to promise a connection between the two. However, as the Internet banner ads say, what happens next may surprise you. Audrey’s half of this bizarre diptych is magical almost beyond description, reflecting Gary’s half symbolically in a way similar to the bifurcation in Apichatpong Weerasethakul’s Tropical Malady. Gary and Audrey do eventually meet, in an exchange that’s a bit cute for my taste, but even this cuteness arguably has a function, located in the briefly glimpsed lives of the people who aren’t Gary or Audrey. (Roschdy Zem’s appearance as a Hilton desk clerk who’s currently sleeping in his car seems especially pointed.) In any case, Ferran’s last film, Lady Chatterley—an assured, slightly offbeat D.H. Lawrence adaptation—in no way suggested the go-for-broke combination of microscopic procedural anarchy and anthropomorphic whirlwind insanity seen here. Most other critics seem to strongly prefer the Audrey half (which features some of the most quietly impressive F/X work I’ve ever seen) to the Gary half, but to my mind, they complement each other perfectly—so perfectly, in fact, that the denouement that formally brings them together is unnecessary. That’s a quibble, though, as is my involuntary wincing at a cheesy “Space Oddity” needle drop. Bird People (which screened in Un Certain Regard, but should be in Competition) is exactly the kind of ambitious lunacy Cannes needs.

There’s less to say about the two Asian films I’ve seen over the past 24 hours, unfortunately. Zhang Yimou, who hasn’t had a film in Competition here since 1995’s Shanghai Triad, has brought a shameless melodrama (screening out of Competition) called Coming Home, which has no relation to the 1978 Oscar-winner of the same title. Set during and immediately after the Cultural Revolution, it stars Zhang’s erstwhile muse Gong Li as Wanyu, whose husband, Yanshi (Chen Daoming), was apparently arrested and jailed for subversive activities. By the time Yanshi is finally released, Wanyu has gone “movie crazy” (plausibility zero, in other words): She remembers that she has a husband in prison, but doesn’t recognize him when he’s standing in front of her, mistaking him either for a complete stranger or for a Party official whom (it’s implied) she slept with to keep Yanshi from being executed. Part returning-POW saga and part amnesiac romance, Coming Home is an enjoyably cornball tearjerker, bolstered by solid performances from the two adults. (The girl playing their teenage daughter is more problematic.) Zhang doesn’t seem entirely invested, though; he forgoes his usual experiments in color and kineticism, and lets a syrupy score carry most of the emotion.

Cannes regular Naomi Kawase, by contrast, couldn’t be more invested, though in her case, that’s more liability than asset. Before the festival began, she declared Still The Water her masterpiece, and it’s at least a bit less tiresome than her previous films (Hanezu, The Mourning Forest, Shara, Suzaku), with some welcome familial warmth and some stirring shots of the Japanese coast. The film’s nominal story involves a terminally ill mother, a corpse found floating in the ocean, and a tentative teen romance; as usual, though, Kawase is mostly interested in having these characters speak her ideas aloud, handing them endless turgid dialogue about nature, death, and the link between the two. (When words won’t suffice, Kawase serves up unsimulated goat-slaughter footage; squeamish viewers should know that two get their throats cut here, with one dying slowly on camera over a period of several minutes.) Cannes’ love for this director is tough to fathom, as her films are always shapeless and ponderous, relying far too heavily on landscapes—like Malick minus the poetry, or with bad poetry substituted. She does win prizes, though (The Mourning Forest took the Grand Jury Prize in 2007, and Suzaku won the Caméra d’Or), so I guess it makes sense that she keeps getting invited back. Does anyone who doesn’t go to Cannes ever see her films, though? Doesn’t seem like it.

Tomorrow: The Artist began its world-domination tour here three years ago, and director Michel Hazanavicius is back with The Search, starring Annette Bening and Hazanavicius’ wife, Bérénice Bejo. And I’d been planning to check out Ryan Gosling’s directorial debut, but word from the first screening (which happened while I was writing this) was pretty toxic, so I’ll probably see the new André Téchiné film instead.