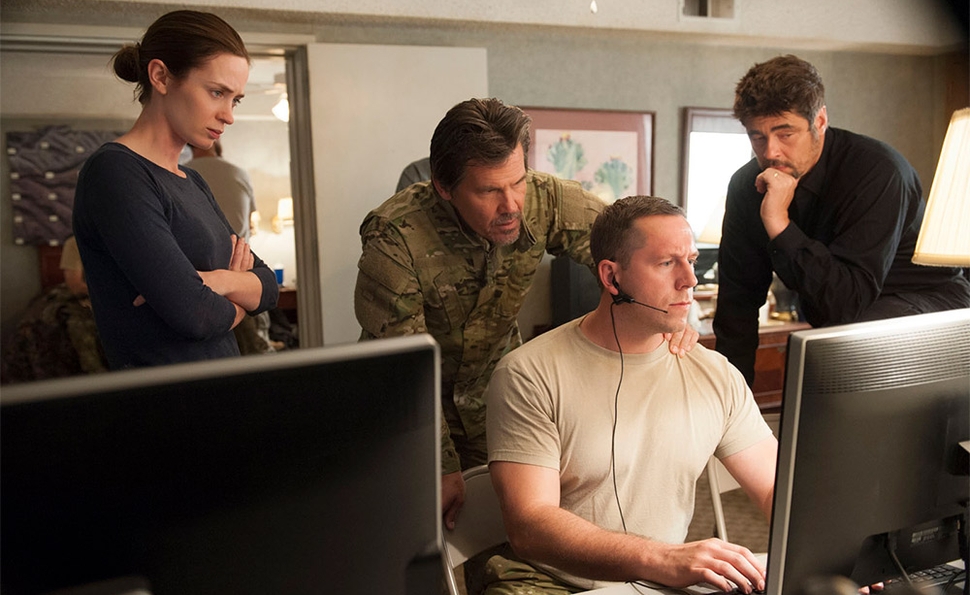 It’s more rewarding, more challenging, and just plain more fun to champion a movie that few others consider great than it is to dismiss a movie that just about everybody else has deemed a masterpiece. More often than not, I find myself in the latter position, which bums me out. Today, however, I get to do both, as the past 24 hours at Cannes have seen me slightly disappointed by the latest effort from a favorite director, then unexpectedly blown away by a film I’d been actively dreading.

Let’s kill the suspense, since there’s more than enough of that in the picture itself. Sicario, Denis Villeneuve’s cartel-hell thriller, hasn’t been greeted with outright derision; many of the early reviews I’ve seen are at least mildly positive, and even the naysayers usually offer some praise for the actors and cinematographer Roger Deakins. But almost nobody, at least so far, appears to be acknowledging how radically subversive this film is—not so much in terms of its politics (though its worldview is cynical enough to alienate many humanist-minded viewers), but in the way it blithely torpedoes the most basic rules of audience identification. Imagine a version of Training Day in which Ethan Hawke’s character remains just as horrified by what he witnesses, but can do absolutely nothing about it.

Here, our surrogate is Kate Macy (Emily Blunt, confirming herself yet again to be the most casually outstanding and remarkably versatile actor of her generation), an FBI agent who’s suddenly drafted onto a team of operatives who are working to topple the Mexican drug cartels. Right from the beginning, Kate has little idea who she’s working for—her immediate superior, Matt (Josh Brolin), claims to be a consultant for the Department Of Defense, but is more likely CIA, while his designated muscle, Alejandro (Benicio Del Toro), vaguely mentions having worked in Juárez and Colombia. An opening crawl explaining that “sicario” is Spanish for “hit man” suggests where this story might be headed, but anyone who’s seen even a dozen Hollywood movies has been conditioned to wait for the inevitable moment when Kate realizes what’s going on and either tries to put a stop to it, or turns to the dark side. Instead, neither of these things happen. Kate is tough, strong, intelligent, principled, and completely powerless. Her eventual role in what goes down, as planned from the outset, amounts to being a notary public.

Passive protagonists are almost always a bad idea, but Kate’s involuntary passivity, as boldly conceived by actor-turned-screenwriter Taylor Sheridan, has a potent strategic purpose, and it’s counterbalanced by Blunt’s steely intensity and by Villeneuve’s deft tightening of the screws as Kate is repeatedly thrust into uncertain chaos. Villeneuve’s previous films (which include Enemy, Prisoners, and Polytechnique) didn’t much impress me—hence my dread—but his choices here are impeccable, even inspired. At one point early on, he orchestrates a border-crossing traffic jam tense enough to destroy multiple theater armrests, immediately followed by a dramatic confrontation that would normally be shot in alternating medium close-ups, but which Villenueve opts to capture from a fixed vantage point half a football field away. Later, there’s a night-vision tunnel sequence that, with an assist from Swedish composer Jóhann Jóhannsson, actually recalls Irreversible’s disorienting tour of the Rectum. Villeneuve also gets a fantastically glib turn from Brolin, who somehow manages to resist letting Matt warm up toward Kate even a little over the course of the entire film (he’s a happy asshole from start to finish), and he shepherds the finest work Del Toro has done since Traffic.

Sicario’s one major weakness is the clumsy way it tries to avoid looking like it’s demonizing all of Mexico, via a minor bad guy who gets blatantly “humanized” in domestic scenes that are otherwise a complete non sequitur. Still, I prefer clumsiness to not trying at all. At least a good-faith effort was made to show that people on both sides of the border inhabit the entire moral continuum, even if the folks on the nastier end—the wolves, in Alejandro’s bleak terminology—are winning.

Already, I’ve spoken to some fellow critics for whom Sicario’s grim hopelessness is a dealbreaker. Those seeking a gentler lament should instead seek out Cemetery Of Splendor, the first “proper” feature from Thailand’s Apichatpong Weerasethakul (hereafter referred to by his nickname, Joe) since he won the Palme D’Or five years ago for Uncle Boonmee Who Can Recall His Past Lives. (Mekong Hotel, an aimless hourlong doodle, played here as a Special Screening in 2012, but has since been swept under Joe’s rug.) Viewers’ enjoyment of this film may depend upon which aspects of Joe’s work they cherish. I prefer him mysterious and enchanting, so I skew less enthusiastic than many of my peers about this readily parsed, somewhat visually flat meditation on buried history.

Set in Joe’s hometown of Khon Kaen, Cemetery Of Splendor stars his frequent acting partner Jenjira Pongpas Widner, who plays (as usual) a fictionalized version of herself. Finding her old school converted into a small country hospital—though the building still contains much of the residue of a schoolroom, including blackboards on the walls—she begins to tend to a young soldier (Banlop Lomnoi, one of the stars of Joe’s Tropical Malady), Itt, who suffers from a bizarre sleeping sickness. Sometimes Itt wakes up and is able to walk about the grounds; at other times, he speaks though a young woman named Keng (Jarinpattra Rueangram) who can read minds. But Itt himself is apparently possessed by the spirits of long-dead kings buried beneath the hospital, and there’s also a visitation from a pair of goddess statues that take human form.

All of this is captivating, at least sometimes. Joe’s still got it, and Cemetery Of Splendor intermittently lives up to its title with stunning sequences involving, for example, the hospital’s efforts to treat the afflicted soldiers with color therapy (every bed has a curved glowing tube beside it), or a lengthy shot of clouds in a bright blue sky that’s suddenly invaded by what looks like a paramecium. More often, though, Joe relies on fairly mundane compositions of characters talking, with a great deal of the film consisting of someone describing the glories that once existed in what’s now a drab location.

Opening with a distant view of a bulldozer digging up earth, Cemetery Of Splendor amounts to Joe’s version of Chrissie Hynde’s sorrowful observation “I went back to Ohio / But my city was gone.” It’s the first film Joe’s made that I felt I mostly understood even as it was unfolding, and the first in which he’s showing definite signs of repeating himself—much of the hospital imagery is familiar from Syndromes And A Century (2006), and it even briefly looks as if Joe is about to end this movie the exact same way he ended that one, with an unexplained cut to a group of extras doing outdoor calisthenics to a jaunty pop song. He doesn’t, thankfully (the actual ending is terrific), but this still strikes me, at least on first viewing, as relatively minor Joe, even if “relatively minor” would be major for most directors.

Tomorrow: We’ve got more Asian masters coming up, and next on the list is China’s Jia Zhang-ke, back at Cannes with his followup to A Touch Of Sin. I’ll try to think of something to say about the useless Competition entry Marguerite & Julien, which somehow makes incest boring. And right now, I’m gonna try to get into the day-after screening of Pixar’s Inside Out, which people mostly seem to love. Wish me luck.