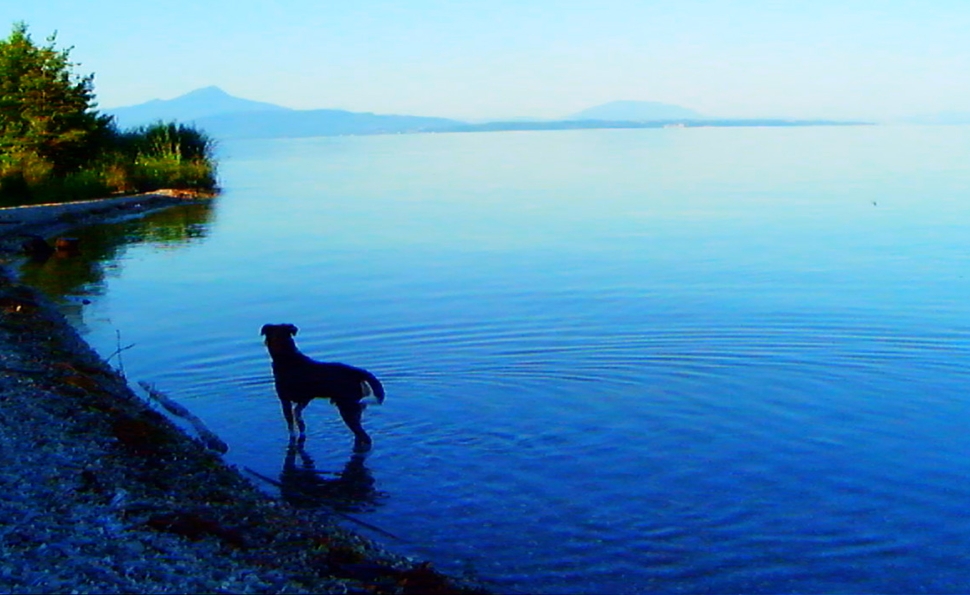 “I hate characters,” says an ostensible character in Jean-Luc Godard’s Goodbye To Language. She’s clearly speaking for her director, who long ago dispensed with virtually every convention of narrative cinema. Only Godard’s legendary status prevents him from being confined to the same separate-but-equal programming slots that host such renowned names as Nathaniel Dorsky, Ernie Gehr, and James Benning. Since roughly the 1990s, Godard has been a full-bore avant-garde filmmaker, working in what practically qualifies as a different medium from the one he helped reinvent when he initially burst onto the scene. According to my Twitter feed, Goodbye To Language has reinvented cinema again—one dude went full Pauline Kael and compared it to Picasso’s Les Demoiselles d’Avignon—but there’s a very real sense in which I feel simply unqualified to evaluate it, just as I’m unqualified to evaluate an opera or ballet. This film isn’t operating in the same mode (perhaps “realm” is a better word) as even the most abstruse art films that normally play in Competition here. That doesn’t necessarily make it great, but I should admit that I lack the tools to know whether it is.

That said, this is easily my favorite Godard film in a long time—since Weekend, in fact, which was made before I was born. (Not that I’ve seen everything he’s made in between, by a long shot.) Partly, that’s because he’s less pushily epigrammatic and aphoristic than usual, so that it doesn’t constantly seem as if he’s primarily interested in demonstrating his own erudition. There’s even a story here, albeit a typically nebulous and fragmented one, about an adulterous couple and their discontents, though no human being in Goodbye To Language is remotely as compelling as the dog that seems to be mediating much of the film’s multivalent imagery. As with other late Godard (Film Socialism, Notre Musique, In Praise Of Love), forward motion is nonexistent—it feels as if most of the scenes could be re-edited in virtually any order, with no discernible difference in overall effect—and he’s still prone to having his “characters” repeat inanities like “Is it possible to produce a concept of Africa?” or grumble that Solzhenitsyn didn’t need to Google the subtitle of one of his books, so nobody else should either. (That ranks high among the dumbest things a smart person has ever said.) But there’s less hectoring here than usual, and more playfulness, belying the title’s cranky pessimism.

Still, what makes Goodbye To Language extraordinary, in a way accessible even to an avant-garde ignoramus like myself, is Godard’s revolutionary use of 3-D, a gimmick I’ve always had little to no use for. Some of this is just unusually creative placement of foreground objects, which obscure the ostensible action, or just distract the eye from it. Some of it is dazzling composition, like a shot in which a chain-link fence, with a woman’s fingers interlaced through it, seems to be precisely flush with the screen, while everything else appears to be located further back. (It’s the exact opposite of the usual protrusion effect.) Some of it is multi-dimensional superimposition, words on top of other words—Godard gets a big laugh right off the bat with a title card that has “3-D” floating atop a tiny, distant “2-D.” And some of it is just plain unprecedented. Godard does things here that, as far as I know, nobody else has ever thought of, and one effect is so singular and bizarre that I actually briefly lifted my 3-D glasses so I could figure out what the hell I was even seeing. Turns out he’d had the camera pan to follow an actor walking away from another actor, then superimposed the pan onto the stationary shot, creating (via 3-D) a surreal loop that, when completed, inspired the audience to burst into spontaneous applause. It’s not often that a movie offers something I’ve literally never seen before, and while I’m skeptical that this heralds any new direction for cinema, it’s at least pretty damn cool.

Equally unusual, but significantly less cool, was Xavier Dolan’s decision to shoot his fifth feature, Mommy, in a 1:1 aspect ratio, projected as a perfect Instagram square within the rectangular screen. (To me, the image looked slightly taller than it was wide, but I’m assured that this is an illusion derived from our being so accustomed to horizontal movie screens.) I spent most of the excessively lengthy film (two hours, 15 minutes) trying to determine what this ratio achieves, apart from a general sense of constriction. Twice, at euphoric moments, the screen expands briefly to its full width, providing a rush not unlike The Wizard Of Oz’s shift from black-and-white to color. But those interludes aren’t nearly charged enough to justify what’s otherwise an overly claustrophobic experience. There’s a reason why nobody makes 1:1 movies: It’s just visually unappealing, in the same way iPhone videos shot by people who don’t think to turn the phone horizontal are unappealing.

Not that “appealing” is necessarily Dolan’s objective here. As the title suggests, Mommy is a companion piece to his 2009 debut, I Killed My Mother; both films star the great, shamefully little-known actress Anne Dorval as the mother (though they’re completely different characters), but this one sticks primarily to her perspective, rather than alternating it with that of her teenage son. Steve (Antoine-Olivier Pilon) is a havoc-wreaking whirlwind of inappropriate behavior, overly clingy when he isn’t rude or impulsively violent, and he’s just been kicked out of school for setting fire to the cafeteria. Since an opening title sets the movie in the near future, after Canada has passed a controversial law allowing parents to instantly commit a problem child without having to go through the courts, there’s little doubt that Dorval’s Diane (nicknamed “Die”), who’s just as wild as her offspring, will wind up unable to handle Steve. The inevitable moment of her betrayal is forestalled, however, by the gentle ministrations of the stammering neighbor across the street, Kyla (Suzanne Clément, the superb female lead of Dolan’s Laurence Anyways), who prefers this family to her own.

Considering how long Mommy is, it’s surprising how little Dolan does with this scenario, which mostly runs around in hyperactive circles until it’s time for the big third-act meltdown. The film isn’t exactly a character study, but neither is it a satisfying narrative. Mostly, it’s just a showcase for its two marvelous actresses, acting in diametrically opposed registers: Dorval makes Die one of those people about whom the phrase “force of nature” is employed because “garish loudmouth” seems too blunt, while Clément locates hidden reserves of fiery passion beneath a hilariously mousy exterior. Dolan still seems to identify most strongly with his alter ego, though, and he lets Pilon’s perpetually cranked-up-to-11 performance set Mommy’s tone. The unmodulated shouting and thrashing becomes wearying over such an extended length, as do the constant needle-drops—“Wonderwall” again? Dolan is only 25, so the fact that he’s already made four features, and has now had one in Competition at Cannes, is downright remarkable; these early films are his juvenilia, to some extent, and he’s likely to grow out of his most excessive tendencies toward self-indulgence. That should be something to see.

Tomorrow: I’ve already seen Ken Loach’s Jimmy’s Hall, but since I wound up writing more on the Godard than I expected, and since the rest of today is pretty light, I think I’ll save it for the next entry. Also on tap are the final two Competition films: Andrey Zvyagintsev’s Leviathan (no relation to the 2012 documentary by that name, or to the 1989 Peter Weller thriller) and Olivier Assayas’ Sils Maria. I haven’t been a huge Zvyagintsev fan thus far, so the latter is my last realistic hope for another home run.

(Mike D’Angelo’s Day One coverage of Cannes covered Nicole Kidman in Grace Of Monaco and the latest from Mike Leigh. Day Two suggests putting Atom Egoyan out to pasture, and checks in with Israel’s Keren Yedaya. Day Three slogs through two long, not-always-rewarding films by Nuri Bilge Ceylan and Bertrand Bonello. Day Four covers the chilling It Follows and a new Western by Tommy Lee Jones. Day Five reckons with high-profile disappointments from David Cronenberg and Bennett Miller. Day Six comes back strong with another winner from the Dardennes. Day Seven finds an Oscar-winning director now crippled by newfound self-importance.)