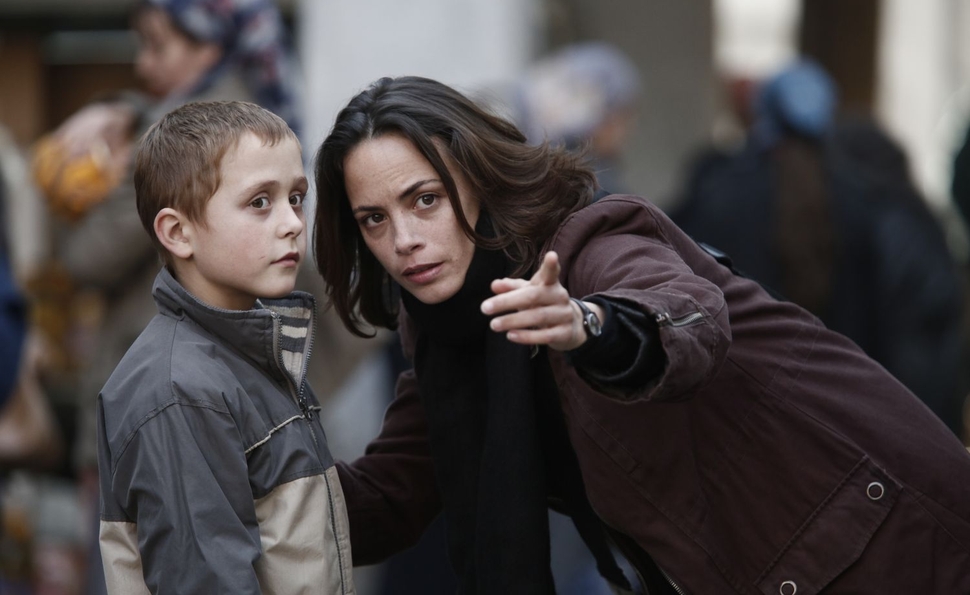 Three years ago, The Artist was announced as part of Cannes’ Un Certain Regard sidebar—an appropriate forum for a mildly enjoyable pastiche of silent cinema by way of Singin’ In The Rain. At the last minute, the festival decided to bump the film into Competition, most likely because another possibility for the final slot didn’t pan out. Jean Dujardin subsequently won Best Actor, and that was just the beginning of a Weinstein-backed onslaught that ultimately led to the Academy Awards, where The Artist took home Best Picture, Director, Actor, Costume Design, and Original Score. Even the New York Film Critics Circle—a group that really ought to know better—declared it 2011’s best film, preferring it to The Tree Of Life, A Separation, Margaret, Certified Copy, Meek’s Cutoff, Uncle Boonmee Who Can His Recall His Past Lives, and sorry I have to stop now to wipe the tears from my keyboard.

All this adulation clearly persuaded Michel Hazanavicius, who’d previously made only a few lightweight comedies, that he’s a Terribly Important Filmmaker, and now he’s returned to Cannes with The Search, a Terribly Important Film. In broad outline, it’s a remake of a 1948 Fred Zinnemann picture (which I haven’t seen), starring Montgomery Clift; the action has been shifted from World War II to the outset of the Second Chechen War in 1999, and Clift’s character is now a female European Union delegate, Carole, played by Hazanavicius’ wife, Bérénice Bejo. Parallel story threads involve a 9-year-old Chechen boy, Hadji (Abdul-Khalim Mamutsiev), whose parents are killed by Russian soldiers and who’s eventually quasi-adopted by Carole; the boy’s older sister, Raïssa (Zukhra Duishvili), who’s conducting the titular search, but winds up working in an orphanage run by an American (Annette Bening); and an ordinary young Russian, Kolia (Maxim Emelianov), whose forced induction into the army gradually transforms him from a sensitive, frightened kid into a heartless killer.

As in Paul Haggis’ Crash, the most pressing question is which of these loosely interlinked narratives is the most risible. Hazanavicius, who also wrote the screenplay, is unquestionably sincere, but subtlety is not his forte, to say the least; The Search rolls over its thinly conceived characters like a Russian tank, flattening each one into a didactic position paper. Bening’s orphanage head speaks entirely in platitudes; Bejo gets saddled with two painful speeches about the world’s indifference to Chechnya’s suffering; and little Hadji, for the sake of dramatic convenience, doesn’t speak at all until it’s suddenly convenient for him to do so. Even ostensibly lighter scenes, like one in which Carole tries to cheer Hadji up with some Bee Gees on the stereo, play like gloomy tracts. (Should he? Should he be dancing?) Kolia’s almost entirely separate descent into thugville is simultaneously overripe and familiar, and I predicted how his storyline would link up with Hadji’s literally two hours in advance, as the movie plods on for a wearying two and a half. Hazanavicius may think he’s Stanley Kubrick or Steven Spielberg now, but if he’s very lucky, he may one day improve to the point where folks consider him the new Roland Joffé.

(Yes, I know Joffé won the Palme d’Or. That’s my point. Though I do need to revisit The Killing Fields, which I haven’t seen since 1984.)

For an example of what a first-rate director can do, even with inherently problematic material, look no further than André Téchiné’s In The Name Of My Daughter, which screened last night out of Competition. Like Téchiné’s recent The Girl On The Train, this period drama was inspired by a true story: the 1977 disappearance of Agnès Le Roux (Adèle Haenel), the young French heiress to a casino fortune. Le Roux’s body was never found, but it’s widely believed that she was killed by her lover, Maurice Agnelet (Guillaume Canet), who worked as an attorney for her mother, Renée (Catherine Deneuve). Believe it or not, this case is still ongoing in the French courts—there was a judgment against Agnelet just six weeks ago, well after In The Name Of My Daughter must have wrapped—and that murkiness eventually hobbles the movie, which loses focus when it leaps ahead to the present day, and is forced to slather Canet and even Deneuve in bad old-age makeup. Téchiné’s formal brio dazzles throughout the speculative 1970s flashback, however, abetting his cast’s superlative performances—Canet is superbly manipulative, Haenel rivetingly mercurial—with jagged rhythms that suggest disquiet long before the trouble begins. I walked in not knowing the film was based on actual events, and was blindsided when the inconclusive denouement revealed that it isn’t pure fiction.  (There’s no “based on a true story” title card at the beginning.) Only that damp fizzle of an ending prevents it from ranking among Téchiné’s best work; judging from his recent output, he’s one of the world’s most supple filmmakers in search of a worthy vessel for his talent. Somebody find him one.

As I mentioned at the close of yesterday’s report, I had originally planned to catch Ryan Gosling’s directorial debut, Lost River, but was scared away by toxic buzz (and the dread-inducing words “Harmony Korine”). That film has since garnered a few hesitant champions, but I’m still very happy I opted instead to hoof it down the Croisette to the Directors’ Fortnight and take a chance on a random French-Canadian comedy called Tu Dors Nicole. (No alternate English-language titles are generally provided for French-language films here, but that translates as You’re Sleeping Nicole.) I haven’t seen any previous films by writer-director Stéphane Lafleur, but they’re apparently dramas, and they seem to have been indifferently received. He’s evidently found his true calling in comedy, though, because Nicole is a delight. Plotless and episodic, it depicts a few lazy summer days in the life of its perpetually bemused title character (memorably embodied by Julianne Côté), whose parents are on vacation, leaving herself and her much older brother, Rémi (Marc-André Grondin) to fend for themselves.

The film’s fragmented, bite-sized narrative approach and black-and-white cinematography recall Frances Ha. There are echoes of Ghost World in the increasingly bumpy relationship between sardonic brunette Nicole and her blonde, bubblier best friend, Véronique (Catherine St-Laurent). Lafleur combines those influences and numerous others into his unique sensibility, though, juxtaposing dreamlike interludes with absurdist humor. (Best running gag: Nicole being aggressively wooed by a little boy she babysits whose voice has dropped early, making him sound like he’s about 40.) It’s the kind of film in which the heroine gets spooked by a vehicle driving circles around her block late at night, emitting weird noises, only to find that it’s a new dad trying to lull his infant to sleep with a combination of vehicular motion and whale songs. (“It’s working on me,” he says, holding up a huge cup of to-go coffee.) Even Rémi’s garage band is consistently funny, and I thought I never wanted to see a garage band in an indie comedy again. Unlike Frances Ha and Ghost World, Tu Dors Nicole doesn’t have anything much on its mind past a series of amusing riffs. That’s fine, though. Pleasure is pleasure.

Tomorrow: The day I’ve been dreading, when I must tackle the latest impenetrable Jean-Luc Godard picture, which is in 3-D. Also, Ken Loach returns to Cannes for the zillionth time with Jimmy’s Hall. And Xavier Dolan, whose debut feature I Killed My Mother, starring Anne Dorval, was among my favorites back in 2009, attempts to make lightning strike twice in the same place with Mommy, also starring Dorval.

(Mike D’Angelo’s Day One coverage of Cannes covered Nicole Kidman in Grace Of Monaco and the latest from Mike Leigh. Day Two suggests putting Atom Egoyan out to pasture, and checks in with Israel’s Keren Yedaya. Day Three slogs through two long, not-always-rewarding films by Nuri Bilge Ceylan and Bertrand Bonello. Day Four covers the chilling It Follows and a new Western by Tommy Lee Jones. Day Five reckons with high-profile disappointments from David Cronenberg and Bennett Miller. Day Six comes back strong with another winner from the Dardennes.)