The Divergent Series: Insurgent tears down the faction of Good Taste; props up the box office 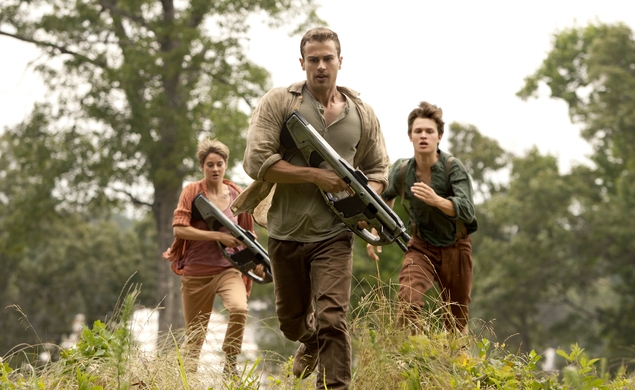 Despite being unequivocally terrible, The Divergent Series: Insurgent won the box office this weekend with a $54 million total that fell just short of Divergent’s $54.6 million opening last year. Internationally, it pulled in an additional $47 million for a total of $101 million worldwide. In other words, almost all of the people who saw Divergent came back for Insurgent because, as Genevieve put it so eloquently in her review, “reasons.” Kate Winslet, maybe? (Related: Why is Kate Winslet in this movie? Why is anybody in this movie?)

Liam Neeson I mean Sean Penn’s The Gunman shot itself in the foot, coming in at No. 4 with a $5 million gross. The old-guy-shoots-people flick earned 1.5 stars from our own Keith Phipps—.5 more stars than Divergent, so it has that going for it—due to its lead actor being “as charismatic as a pamphlet”; it’s likely this marks the beginning and end of Sean Penn’s foray into Taken-esque territory. I think Sean Penn will be okay, though.

The weekend’s third wide release, Do You Believe, fared even worse, coming in at No. 6 with $4 million. The faith-based fiesta tried its darnedest to remake Crash, but with more Jesus; unfortunately, it couldn’t reach the heights of its predecessor God’s Not Dead, which pulled in $9.2 million during its opening weekend, or its spiritual sibling Heaven Is For Real, which made $22.5 million. But even bad movies go to heaven, so it’s fine.

To the likely sheer horror of everybody involved in Do You Believe, breakout hit It Follows, a decidedly un-Christian affair, expanded to 32 theaters this weekend and pulled in a hair-raising $352,000, making it the third-best per-screen average after Danny Collins (which opened in five theaters and made $73,200) and Insurgent. As we reported earlier this week, It Follows will expand into 1,000 theaters later this month, so please go see that instead of any of the other movies I’ve just covered. Or the well-received Kumiko, The Treasure Hunter, which opened in four theaters and pulled in $37,200, the exact amount Steve Buscemi left in his suitcase in Fargo.

Rounding out the rest of the top 10: Cinderella, which dropped its glass slipper as it tumbled to No. 2 with a $34.5 million weekend gross; Run All Night, which is somehow not the same movie as The Gunman, slipped and fell from No. 2 to No. 3 with $5.1 million; Kingsman: The Secret Service snuck very Britishly from 3 to 5 in its sixth week in theaters, adding $4.6 million to its $114.6 million gross thus far; The Second Best Exotic Marigold Hotel shuffled slowly from sixth to seventh place, pulling in $3.5 million; Focus pulled in $3.3 million as it tumbled blearily from fourth to eighth place; Chappie wound down from No. 5 no No. 9, grossing only $2.7 million; and The SpongeBob Movie: Sponge Out Of Water dripped from seventh to 10th place, squeezing out an additional $2.4 million. Also, Fifty Shades Of Grey is still happening? and made $1.3 million this weekend, bringing its worldwide total to $558.3 million.