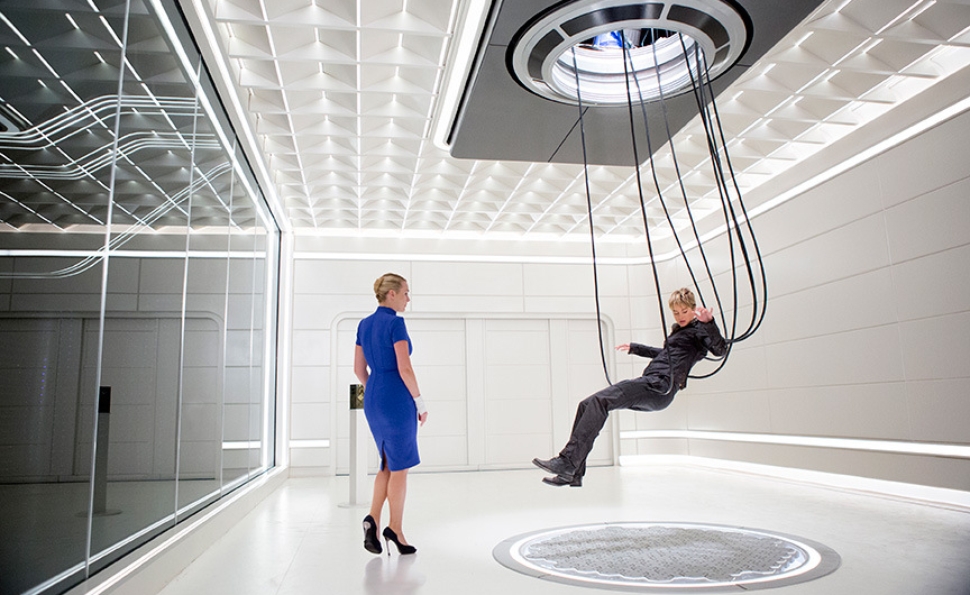 “I have to do this. I know it doesn’t make any sense, but you have to trust me.”

That’s Tris (Shailene Woodley) explaining a last-minute, reckless—some might say asinine—change of plans to her boyfriend, Four (Theo James), but it might as well apply to the whole of Insurgent. The second film in a franchise that kicked off with last year’s flashy but muddled Divergent, Insurgent delves even deeper into the poorly considered mythology of Veronica Roth’s hit young-adult book series, building action beats and moments of tension around a conceit that puts easy allegory ahead of logic or coherence. It doesn’t make any sense, but Insurgent demands its audience play along anyway. The problem is, the film doesn’t do enough to earn viewers’ trust, or reward it once it’s given.

Picking up shortly after the events of Divergent, Insurgent finds Tris and Four, along with their Dauntless frenemy Peter (Miles Teller) and Tris’ brother Caleb (Ansel Elgort), hiding out at the Amity compound from a militarized force overseen by Erudite leader Jeanine Matthews (Kate Winslet) and Dauntless traitor Eric (Jai Courtney). Yes, as evidenced by that pile-up of capitalized words, Divergent’s nonsensical faction system—which divides the populace of a cloistered post-disaster society into five groups based on broad personality traits—remains roughly intact in Insurgent, though it’s been perverted by Jeanine’s attack on the Abnegation faction at the end of Divergent. Jeanine is presented as obsessed with upholding the sanctity of the faction system—you know, the one she just tried to destroy one-fifth of in the last movie. That obsession leads her to persecute “Divergents” such as Tris, who exhibit characteristics of more than one faction, and thus prove a danger to the system, because… reasons.

Enter The Box. Discovered in Tris’ old Abnegation home, hidden by her mother (Ashley Judd)—who was killed at the end of Divergent, but makes several flashback/dream-sequence appearances here—The Box (capitals implied) contains a message from the society’s founders. Jeanine believes that message holds the key to reestablishing the status quo and ridding society of Divergents. Only problem: The Box requires someone to go through five different faction-based “simulations”—the chemically induced artificial landscapes that determine and reflect people’s factions—in order to open it, something only a Divergent can do. So, in order to rid society of Divergents, Jeanine must find a Divergent, but not just any Divergent. As she discovers after several test subjects die during the barrage of simulations, she needs “that very special one.” Hear that? Not just any Special will do, she needs the most special Special.

That most special Special is of course Tris, who, along with Four and Caleb, is forced to flee the Amity compound when Eric shows up and Peter betrays them. They eventually fall in with the “factionless,” a group previously presented as the needy outcasts of this society, but here revealed to be amassing a rebel force overseen by Evelyn (Naomi Watts), who turns out to be Four’s thought-to-be-dead mother. Four’s mommy issues and reluctance to start a full-on war leads him and Tris to the Candor compound, where the remaining Dauntless members are hiding out. Jeanine and her thugs probably won’t think to look for them there, right?

After some more nonsense involving truth serum, remotely operated biochemical simulations, and a flat showdown between Four and Eric, Tris gives herself up to Jeanine and The Box, and Insurgent limps toward its endgame, after flailing for 90 minutes or so. Hamstrung by allegiances that shift seemingly at random, and by an increasingly disengaged Woodley—who seems to be growing visibly exhausted with this franchise as Insurgent grinds on—the film’s narrative breaks down into a bland, thin gruel that nourishes neither the mind nor the guts. It’s a slog, punctuated by perfunctory fight scenes that director Robert Schwentke (RED, R.I.P.D.) stages with minimal flair. For all its narrative problems, Divergent at least moved well under the steady hand of director Neil Burger, who injected the source material with some action-movie verve, very little of which survives in the sequel.

What Schwentke does bring to Insurgent is a plodding, repetitive rhythm married to a flashy visual style that often makes the film feel more like a particularly uninspired videogame; call it Dystopian YA: The Game. Tris must complete levels and vanquish foes in order to open a special box. Fight scenes arrive out of nowhere, and drag on too long. Characters run everywhere. At one point, the protagonist appears to die, then comes back to life to fight some more. Even the film’s visual aesthetic, which leans hard into a glitchy, pixelated, blue-toned vision of the near-future, evokes a videogame more than a film. Videogames have advanced, visually and narratively, to the point that movies looking to them for inspiration isn’t inherently negative, but Insurgent doesn’t do right by either medium.

Were Insurgent and the rest of the Divergent series interested in telling an actual story, rather than a facile allegory, it might be able to sculpt something memorable or even valuable from Roth’s narrative lump of clay. But instead, it seems content to chuck that shapeless lump at screens and hope it splats into something resembling a movie. If viewers are willing to trust in the film and give themselves over to a garbage premise—which turns out to be even more ridiculous than originally presented; see The Reveal for more—they may be able to glean some enjoyment from Insurgent. But like the simulations on which so much of Insurgent’s plot turns, such enjoyment is purely theoretical and wholly artificial, and evaporates into nothing once the spell is broken.