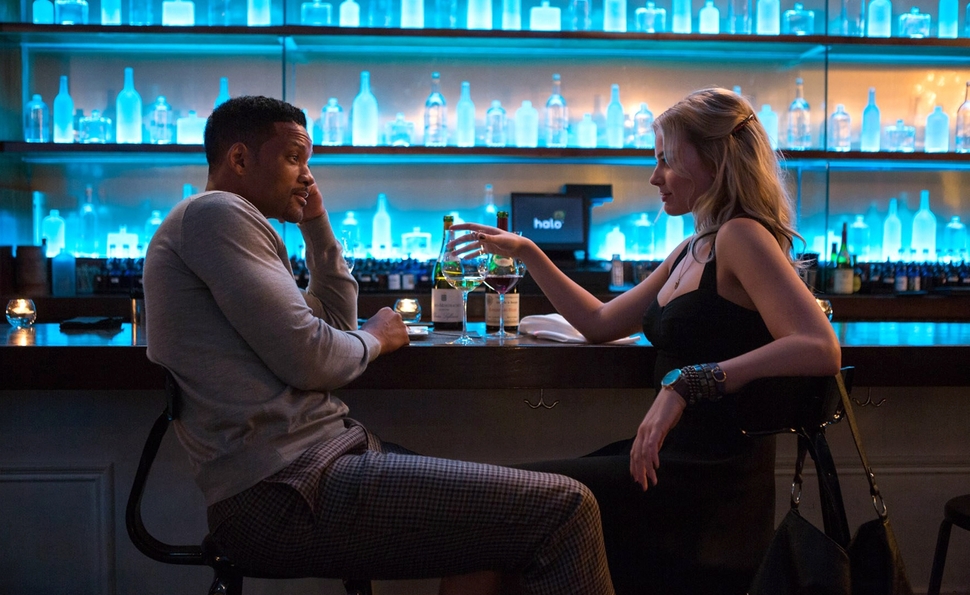 There’s a scene late in Quiz Show where the film’s crusading hero, played by Rob Morrow, finally has definitive proof that the popular game show Twenty One is fixed—that the producers are supplying the answers, and it’s highly likely the network and the show’s chief sponsor, Geritol, are aware of it. Though the producers and the contestants ultimately take the fall in Congressional hearings, Morrow gets his big meeting with Geritol’s president, played by a fast-talking Martin Scorsese. The president doesn’t deny the charges—in fact, he’s insulted by the notion that he isn’t aware of everything that happens with regard to the show—but he doesn’t break a sweat, either, because the fraud won’t come close to taking down the industry or its supporters. “You see,” he says, “the audience didn’t tune in to watch some amazing display of intellectual ability. They just wanted to watch the money.”

In a nutshell, “watching the money” is precisely the appeal of a diverting heist picture like Focus, a slight-of-hand trick about slight-of-hand tricks that moves the money around, then disappears like vapor. What are we left with? If we’re being extremely generous, a love story about the trust that develops between con artists who deal in deception. But really, Focus is more about the sensation of having your wallet lifted by a pickpocket with nimble fingers; as Herbert Marshall tells Miriam Hopkins in 1932’s Trouble In Paradise, the definitive romance-among-thieves comedy, after she takes his wallet, “You tickled me.” Focus is skilled enough to earn the viewer’s emptier billfold.

Having two glamorous stars in the lead becomes its own type of watching the money. Will Smith coasts on his charisma—which sounds like an insult, but happens to be exactly right for the role of Nicky, a veteran con man who knows all the angles. Fresh off her star-making turn in The Wolf Of Wall Street, Margot Robbie plays Jess, a prodigy Nicky takes under his wing after her attempt to rip him off falls short. The two of them head to Super Bowl weekend in New Orleans, where Nicky and his crew boost hundreds of thousands of dollars in loose cash and jewelry off tourists while working a much bigger scam on game day. Nicky and Jess develop a professional and personal relationship on the job that ends with him abruptly breaking it off. Three years later, the two meet again in Buenos Aires, but are seemingly at cross purposes over a scheme involving a duplicitous race-car driver (Rodrigo Santoro).

The reliably solid team of Glenn Ficarra and John Requa—who previously scripted Bad Santa and moved into directing with I Love You, Phillip Morris and Crazy Stupid Love—have a fine ear for dialogue and specialize in stories of elaborate deception. The basic architecture of Focus is a more upscale, less vulgar version of Bad Santa and I Love You, Phillip Morris, and perhaps slightly less entertaining than the others as a result. Nicky and Jess aren’t nearly as colorful as the rip-off artists in their earlier films, but they’re considerably more glamorous, which suits a heist thriller that’s busy with cons large, small, short, and long. Smith and Robbie have great chemistry together, and neither of them try too hard to complicate their fun, sexy partnership.

Focus’ only real trouble is that it leaves little behind but the thin fragrance of absurdly beautiful people. With the title, which references the thieves’ tactic of drawing focus away from the thing that’s being stolen, Ficarra and Requa find a neat metaphor for deceptions of the heart and how easily everyone can be made vulnerable. But Focus’ tone is so breezy that the theme never registers as more than another in a movie full of clever-for-its-own-sake gestures. Lucky for audiences, that’s still clever.