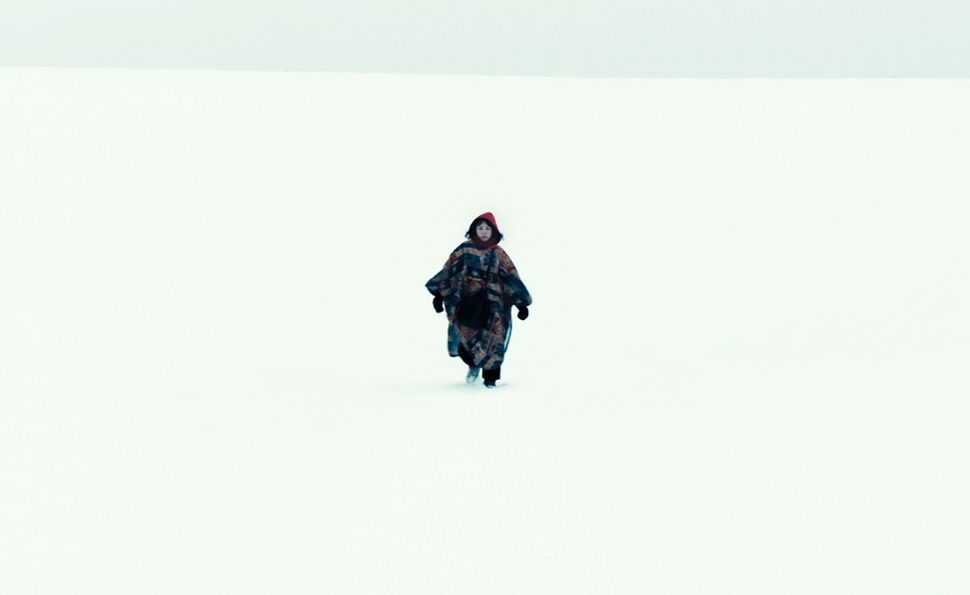 “THIS IS A TRUE STORY,” screams the bold text that both opens the Coen brothers’ Fargo and doubles as its first ironic joke. Claiming the events actually happened in Minnesota in 1987, the note says the names have been changed, but “out of respect for the dead, the rest has been told exactly as it occurred.” The Coens are commenting wryly on the impossibility of “based-on-a-true-story” narratives ever being true, and the gullibility of viewers who accept such tall tales as fact. Now along comes Kumiko, The Treasure Hunter, from another pair of filmmaking brothers, David and Nathan Zellner (Kid-Thing), who take the gullibility part and run with it—all the way to the snow-caked prairies on the road from Minnesota to North Dakota. With nary a wink in the audience’s direction, their beguilingly strange adventure takes the truth of Fargo at face value, and works toward tying up its only loose end.

The beauty of Kumiko, The Treasure Hunter comes from the Zellners treating a silly, whimsical premise with utmost seriousness, and Rinko Kikuchi’s lead performance goes a long way toward sustaining that tone. In a subtle rebuke to corporate patriarchy, Kikuchi (Babel, The Brothers Bloom) plays Kumiko, a self-effacing secretary who bristles at her boss’ degrading requests, and removes herself from the pack of twentysomething Office Ladies who are just passing through on their way to marriage. (When she’s left to watch a young boy, the product of such a marriage, she literally flees.) Living alone in a filthy hovel, Kumiko eats ramen and obsesses over a water-damaged VHS copy of Fargo she discovered on a beach. One scene in particular captures her imagination: When Steve Buscemi’s wounded crook, on the run after a botched kidnapping, buries a suitcase full of ransom money in a snowbank off the freeway, making it with a window scraper. With a stolen company credit card in hand, Kumiko flies to Minneapolis and sets out on a treasure hunt to find the missing loot.

It takes a friendly sheriff (well-played by David Zellner) to point out the obvious: Fargo is not real. But Kumiko isn’t having any of it. And her resistance is mirrored by the film itself, which always seems like a fantasy that could be blown over by a stiff breeze, but keeps on moving forward. The Zellners are tapping into the allure of movies, that fundamental desire we have to escape our humdrum lives and give ourselves over to the more exciting ones playing out onscreen. Movies have played with this desire often, most famously in Buster Keaton’s Sherlock Jr., but Kumiko, The Treasure Hunter connects it to alienation and bone-deep depression. Kumiko never wavers in her conviction that the treasure is out there, waiting for her to unearth it, but there’s the lingering sense that if she wanders off into snowy oblivion, that’s a better option than staying in Tokyo.

Some elements of Kumiko, The Treasure Hunter sync up meaningfully with Fargo, like the fact that Kumiko’s credit-card scam is as plainly ill-fated as car salesman Jerry Lundegaard making an Oldsmobile Cutlass go missing from the lot. The score, by The Octopus Project, playfully reconfigures Carter Burwell’s unforgettable music, and when the Zellners try for some fish-out-of-water comedy, they similarly goof on Minnesota’s lack of worldliness, like when the sheriff tries to employ the owner of a Chinese restaurant to act as Kumiko’s translator. The Zellners are as obsessed with Fargo in their own way as their heroine, but they’re smart enough to get some separation where it matters. Kumiko, The Treasure Hunter is Fargo’s slow, contemplative, quizzical counterpart, stripped of all but the most basic narrative elements, and focused entirely on one character’s peculiar destiny. It’s proof that reference can be a springboard to originality.