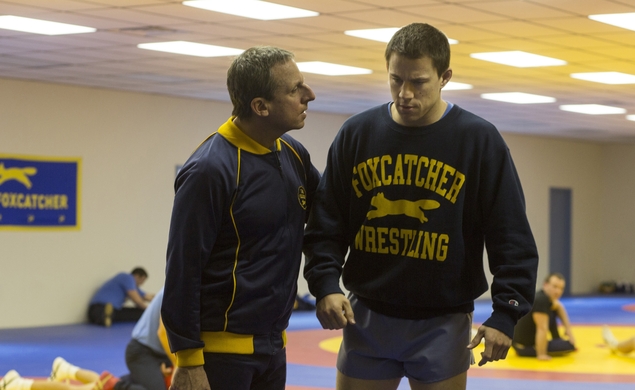 If you’ve already taken in Bennett Miller’s Foxcatcher, you’ll understand why it’s not exactly easy to recommend the film for home-video consumption. Viewed as a possible Oscar contender last year, Miller’s dark drama never really caught on, and despite a pair of acting nominations for Steve Carell and Mark Ruffalo and three other nods for Directing, Original Screenplay, and Makeup and Hairstyling, the film left the Academy Awards without a single statue. In a year filled with dark biopics, Foxcatcher might have been the most overwrought, and the choking sense of unease that clouds it—paired with Carell’s distracting prosthetic nose—makes it a hard watch. Make no mistake, I liked Foxcatcher, but it’s one of those films I have zero desire to ever see again, it made me just that unhappy. But if you haven’t seen it…! Well, you should, if only to see Carell make a go of this drama thing and to watch Channing Tatum ruthlessly put his cranium through a mirror.

Foxcatcher isn’t the only film hitting home video this week that is rooted in murder, but at least we’ve got a pair of more light-hearted offerings to soften things up. On the more amusing end of the spectrum, Scott Foley’s Let’s Kill Ward’s Wife imagines what happens when a group of friends (semi-accidentally) kill their buddy’s terrible wife. It’s amiable and fun and an easy watch, and it certainly makes an argument for Foley’s ability to direct comedy. Another dark option? (Though, one that’s still lighter than Foxcatcher). The third film in the Hunger Games franchise, The Hunger Games: Mockingjay—Part 1, which arrives on Friday for some reason. Sure, ratcheting up stakes and televised child murder are always fun to watch, but the film is mainly of interest because of a final, oddly affecting turn from Philip Seymour Hoffman.