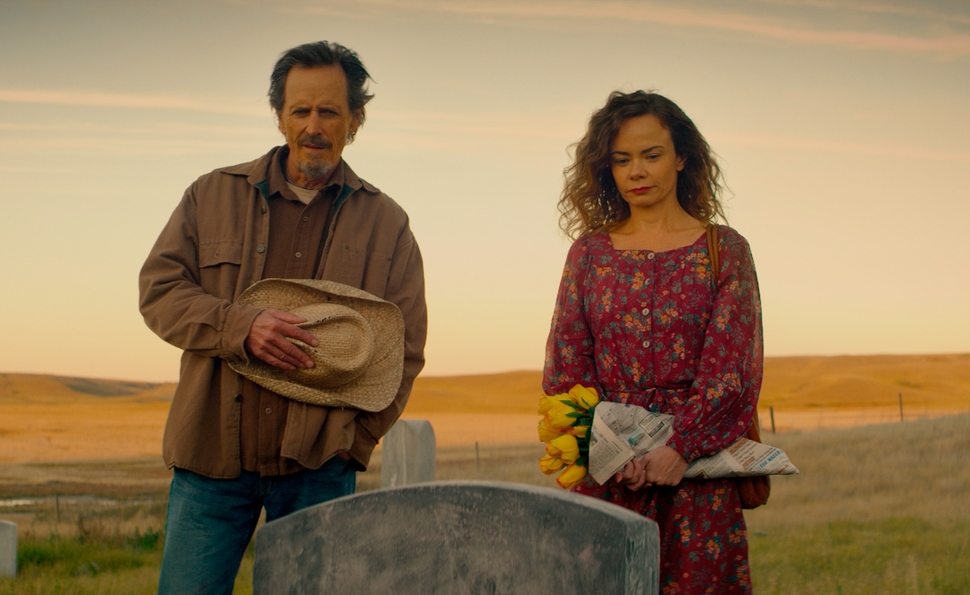 A modern-ish Western by way of the Great White North, the Canadian film Big Muddy is a tasty chunk of genre jerky. It’s the kind of movie where a policeman accepts a stiff drink before delivering bad news, tractor wheels become cover during shootouts, and the charmer in the black cowboy hat is clearly the devil. Writer-director Jefferson Moneo, tackling his first feature, has a good handle on storytelling economy, and gives his unique setting—the badlands of Saskatchewan, where the movie was filmed and where Moneo calls home—ample time to shine.

The film tells two alternate stories, neither with any more exposition than they require. An escaped convict (David La Haye) dodges police pursuers and heads off on the lam with a purpose. Single-mom outlaw Martha Barlow (the excellent Nadia Litz), who makes a living seducing and robbing gullible saps, and her teenage son Andy (Justin Kelly of Degrassi: The Next Generation) also go on the lam after things get heated at the town racetrack with an oily gentleman from Martha’s past. Their fates converge in the Big Muddy Valley, the hilly, unforgiving Saskatchewan prairie where Martha grew up and her estranged father (grizzled character actor Stephen McHattie) sits waiting for trouble to burst through his door.

The land has a rich history as stomping grounds for real-life outlaws like Sam Kelly and the Sundance Kid, something Moneo would have been wise to drag out in more evocative ways. Free of context, his gorgeous setting is just a lot of pretty scenery. The plain digital glaze of the lens can’t evoke its surroundings to the same degree as spiritual predecessors like George Roy Hill’s Butch Cassidy And The Sundance Kid and Terrence Malick’s Badlands—the latter, like Big Muddy, a directorial debut. There’s something about a prairie Western, even more so than other genres, that calls out for the analog charm of film. Still, Moneo shows a strong eye, and not just for rugged farmland: the piercing headlights of police cruisers at night, the shifty faux-elegance of a racetrack’s luxury box, the darkly humorous image of a desperate man holding someone up with a broom handle.

Big Muddy stretches out for tens of thousands of acres, but the Barlow family saga never ventures anywhere out of the ordinary. Still, the performers give their all to the material, as Litz’s aura of mystery creates the illusion of vast reserves of secrets to Martha’s past, even when they wind up being all the expected ones. McHattie also has a lot of fun denigrating Kelly as a computer-loving youngster who hasn’t worked a sufficient day in his life.

A selection at last year’s Toronto International Film Festival in the Discovery category, Big Muddy isn’t a variation on the outlaw theme so much as the most straightforward rendition of it. Moneo is sure to develop a more distinctive voice in future films, but for now, his movie is helping keep some old ballads alive when no one else seems interested in singing.