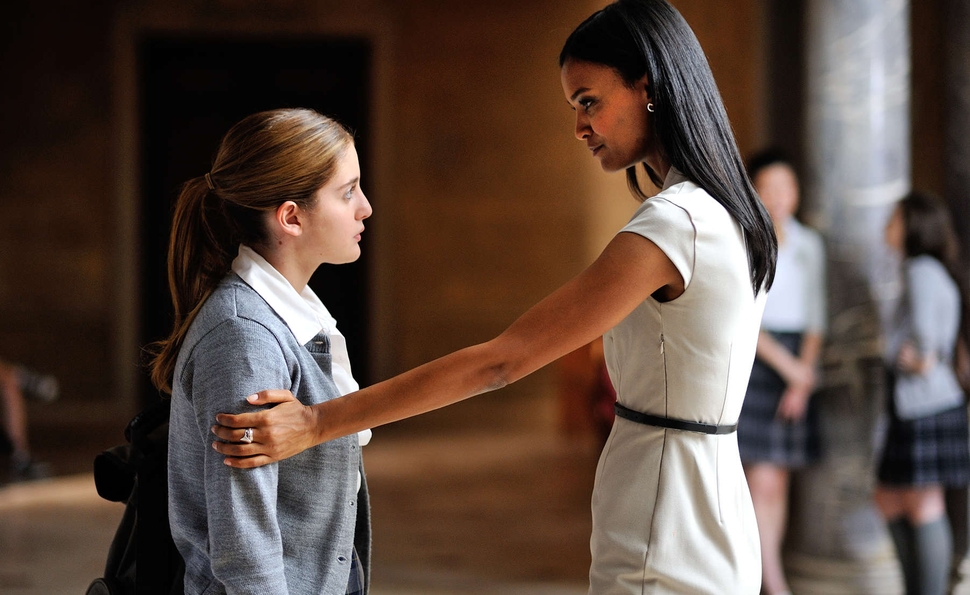 Innocence is one of those jumpy pseudo-horror flicks in which the words “Help Me” surface on steamed-up bathroom mirrors, and the ghosts of dead teenagers  suddenly appear in high-school hallways. This movie, based on Jane Mendelsohn’s 2001 YA novel, isn’t subtle. It also isn’t afraid to careen head-first into every cliché of the supernatural-thriller genre.

Use of loud, abrupt sound effects designed to jolt viewers and jangle nerves? Check. A paranoid protagonist who picks up on sinister vibes and goosebump-inducing clues that prove she’s totally a murder target? Check. Lines of dialogue that sound benign, but actually serve as clear warnings that should be heeded if the main characters know what’s good for them? Come on: of course, check. When a character in Innocence smiles and wryly says, “You’d better make your escape while you can,” the subtext is most definitely: “You’d better make your escape while you can.”

This sort of Lois Duncan-esque business can be fun, especially when explored with an element of camp. Director and co-writer Hilary Brougher, who previously directed the 2007 teen pregnancy drama Stephanie Daley, does skate toward self-conscious cheekiness a couple of times, most delightfully in one scene involving the well-placed use of a ringtone that evokes the theme from Halloween. But the prevailing tone throughout Innocence is as somber as the onset-of-twilight blues and grays that dominate the movie’s color palette. All that seriousness ultimately doesn’t blend well with a narrative that marinates in the preposterous.

Innocence begins with a surfing excursion that turns tragic when the mother of Beckett Warner (Sophie Curtis) disappears, then dies in the water. It’s eventually revealed that she died because of a brain aneurysm, which really should have been acknowledged sooner rather than later. Based on the way the opening scene plays out, it appears the woman’s life ended when she was hit by an ocean wave that probably wouldn’t intimidate a 5-year-old dependent on arm floaties. The wimpiness of that wave may seem like a minor detail, but from the get-go, it throws the authority of the storytelling into question.

Four months after her mother’s death, Beckett and her father, novelist Miles Warner (Linus Roache), move to Manhattan to make a “fresh start.” But fresh starts in chillers like this one inevitably lead to ominous things, which is why Beckett ends up enrolled at an all-girls prep school where the faculty, staff, and parents give off a disturbing, vaguely Rosemary’s Baby vibe. Once Beckett witnesses the suicide of a fellow student, she becomes increasingly convinced that everything isn’t kosher at the Creepfest Academy for Potentially Victimized Girls.

A close study of the costume and production design choices in Innocence—choices that focus on the old and/or ancient, including gothic architecture and a flowing Grecian gown Beckett wears in a couple of key scenes—help to unlock the easily solvable mystery at the film’s core. But even Innocence’s predictability would be less troublesome if it were possible to fully invest in its characters. Unfortunately, the people the audience is supposed to care most about—Miles, Beckett, and Beckett’s alterna-girl best friend Jen (Sarah Sutherland, best known as Selina Meyer’s daughter on Veep, and Kiefer Sutherland’s daughter in real life)—come across as so passive and subdued throughout the first two-thirds of the film that it’s hard to become concerned about them when the danger quotient rises in the final third. It’s particularly odd that Beckett—who, in her plaid-skirted school uniform, looks like the shy, sad-eyed younger sister of a Clueless-era Alicia Silverstone—doesn’t express more resentment or suspicion about the odd, burgeoning romance between Pamela, the school nurse (Kelly Reilly of Flight), and her father. Pamela basically moves in with them, yet Beckett seemingly experiences only mild confusion about suddenly having her dead mother replaced by this seductive, super-pushy redhead, the same woman, by the way, who clearly stated previously that Beckett should make her escape while she can.

Perhaps Brougher places such a thick cloud of melancholy restraint over Beckett to suggest that she and everyone in her orbit has fallen under the spell cast by that freaky prep-school community. Whatever the reasons, it’s a tonal choice that simply doesn’t work. Innocence is about what it means to confront death and mortality. But what it needs more than anything is some life in it.