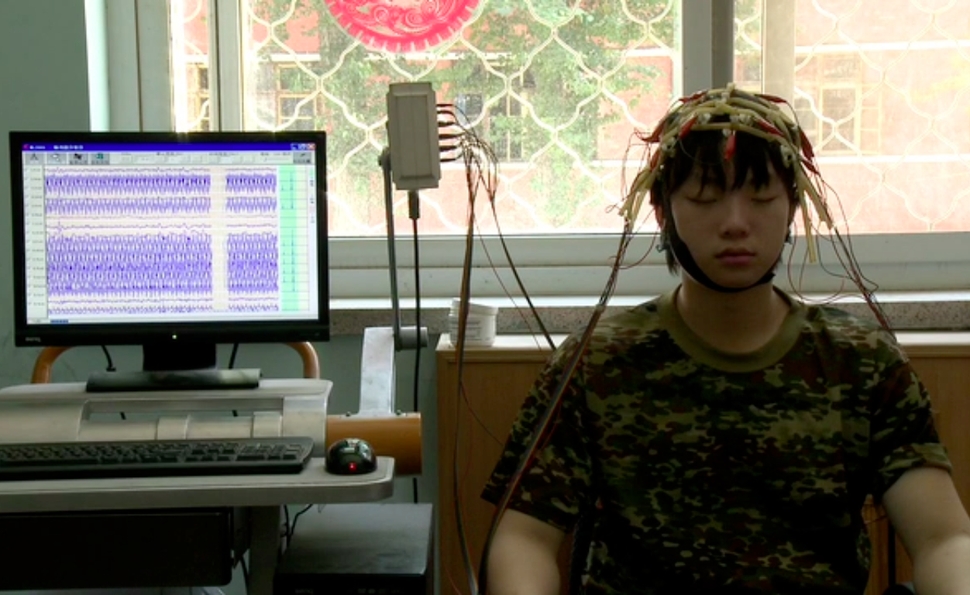 According to the Chinese government—phrases hardly get more loaded than that—the No. 1 public threat to the country’s teenagers is Internet addiction. Or as the documentary Web Junkie more colorfully describes it, “electronic heroin.” Scores of teenage boys would rather log countless hours in Internet cafes, exploring the virtual realm of games like World Of Warcraft, than spend time in the real world, dealing with authoritarian parents and schoolteachers. It’s a story of generational divide, of 21st-century children disengaging with their 20th-century betters, and finding more freedom, excitement, and like-aged companionship online. And China has chosen to combat this problem in a predictably terrible way: by opening “rehabilitation camps” that try to whip these kids into shape through military-style drillmasters, a drug and therapy regimen, and rooms that are essentially prison cells, where they spend a minimum of three months recuperating.

The most remarkable element of Shosh Shlam and Hilla Medalia’s documentary is simply that they were allowed behind the scenes at one of these rehabilitation facilities, presumably because officials were proud of the results. And while Web Junkie never presents itself as a scathing exposé, it doesn’t take much to expose the tragicomic ineffectiveness of the program, which essentially deals with alienated kids by removing them even further from society, and traumatizing them in an effort to scare them straight. Shlam and Medalia haven’t constructed the film particularly artfully—it’s sluggishly paced, and the two boys at its center aren’t vividly drawn—but Web Junkie is a case where the access is so unexpected and revelatory that it’s a wonder just to have the footage.

Shlam and Medalia’s cameras settle at Daxing Boot Camp, a facility in the Beijing suburbs. Most of the new patients—or inmates, really—have been tricked into coming there by their parents, though some have been drugged or forcibly removed from their homes. The facility isn’t addressing a nonexistent problem: The stories are pretty bleak, with the majority of the inmates having dropped out of school and given themselves over to gaming sessions that take up a minimum of six hours a day, but sometimes last for weeks. (One administrator talks about kids not eating or sleeping for days, and wearing diapers in order to skip bathroom breaks. Another kid admits to nearly jumping out the window when his father pulled the plug on his game when he was nearing the end of a level.) There’s a genuinely heartbreaking scene where a mother tearfully recounts losing her son to this addiction, and watching helplessly as he grew more distant and hostile to her.

For Hope, a sullen 16-year-old among a sea of other sullen teenagers, the harsh treatment he receives at Daxing isn’t much different from the way his angry, abusive father treats him at home. Dressed in fatigues, he slouches through morning calisthenics and sits through ridiculous classroom sessions by the facility’s director, who asks his students loaded questions like, “Is the Internet a tool or a toy?” and is given the answer he wants. In the film’s funniest scene, a klatch of patients laugh off their absurd therapies while bragging about their advancement in various games. They’re smart, sarcastic, and more socially adept than adults give them credit for being.

One of the fascinating aspects of the camps is that parents can’t just drop off their kids and hope for the best. They have to participate in group sessions with other parents and in sessions with their children, which sometimes turn combustible. Shlam and Medalia put their cameras right in the center of the action as these conflicts play out, and it becomes tragically apparent that Internet addiction is merely a symptom of a larger disconnect from family and society, rather than the cause. Web Junkie struggles to assemble the scenes into coherent picture of Daxing and its staff and patients, but the scenes themselves are often staggering, including tactics like putting kids into isolation cells for days of “self-reflection” therapy. (This may not cure them of Internet addiction, but it definitely cures them of wanting to spend time in a rehabilitation camp again.) The parents have trouble comprehending what has happened to their children, but the camp itself suggests that older people can’t comprehend what has happened in the culture—and reacting with brutality isn’t going to cut it.