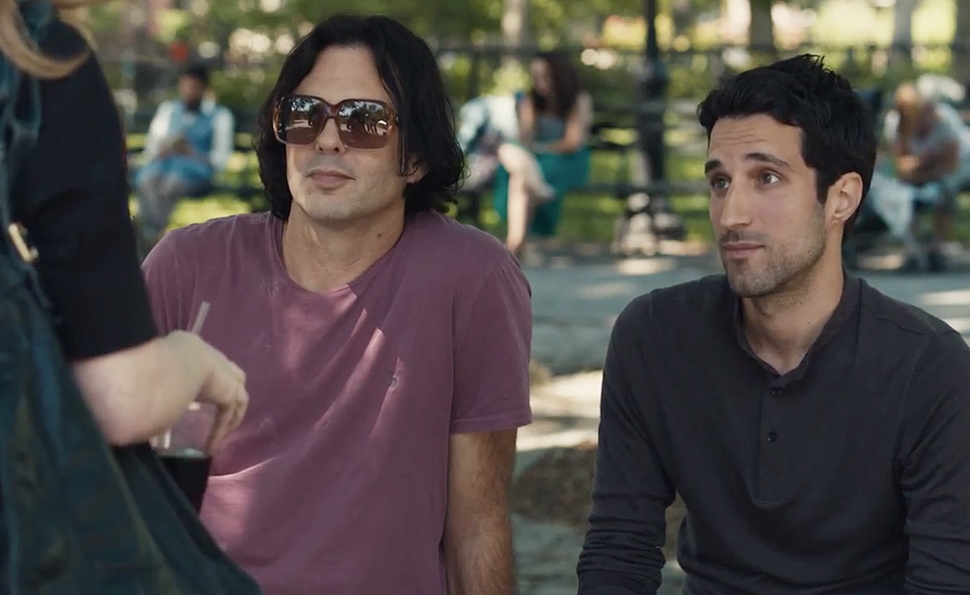 At this point, there are enough films for a Waiting For Sam Rockwell Film Festival, which would involve starting an indie movie, gathering for a half-hour cocktail period in the lobby, then stepping into the theater just in time for Sam Rockwell to show up. Because getting to the Rockwell parts of films like Box Of Moonlight, The Way Way Back, and now Loitering With Intent is a torment of indie-movie wheel-spinning, which his volatile presence always throws into sharp relief. In the case of Loitering With Intent, he never gets the chance to dominate scenes like he does in the other two, leaving the rest of the ensemble to dither their way through a character piece of loose conception and inconsequential drama. It’s perfectly fitting that the premise has two guys writing an indie movie out of a desire to get something—anything—up on the screen.

Those two screenwriters, Raphael and Dominic, are played  respectively by Ivan Martin and Michael Godere, who naturally serve as Loitering With Intent’s screenwriters. Raphael and Dominic have spent their 20s trying and failing to break into the New York film and theater scenes, so when a friend (Natasha Lyonne, in a cameo) tells them of a producer eager to invest $200,000 in the right script, they describe a nonexistent noir screenplay about two brothers (whom they’d play) who run a detective agency. Given two weeks to deliver a draft, Dominic suggests the two retreat to the quiet country home of his sister Gigi (Marisa Tomei), but they don’t find much peace there. Gigi’s younger friend Ava (Isabelle McNally) offers an immediate temptation, and Raphael’s past romantic relationship with Gigi isn’t entirely resolved, which brings additional tension to the arrival of her estranged boyfriend Wayne (Rockwell) and his dim surfer brother Devon (Brian Geraghty).

Not surprisingly, the screenplay-within-the-movie is no great shakes, stalled out by all the other activities happening around Gigi’s place. The film’s sketchy conception is a telling sign that Martin, Godere, and director Adam Rapp have nothing particularly funny or insightful to say about the creative process. The fake script doesn’t need to be good, but it should at least be revealing of Raphael and Dominic’s seriousness (or lack thereof) about their hoped-for careers, or perhaps a biting commentary on writers with nothing to express. That casual commitment to the premise spills over to the rest of Loitering With Intent, right down to its meaningless title, which is an old term for prostitution that doesn’t apply either literally or metaphorically to anything that happens here.

All of which leaves Rockwell to take over as a spurned lover and military veteran who appears ready to take Loitering With Intent to a more dangerous place, à la Ray Liotta in Something Wild. Instead, he ends up yielding equal time to the rest of the ensemble. He and Tomei are responsible for most of the film’s brightest moments, along with Geraghty as Rockwell’s dopey sidekick; generally, the actors furthest down the cast list tend to make the strongest impression. Landing well short of 90 minutes, the film doesn’t have time to wear out its welcome, and Rapp keeps the tone light and pacing crisp. But the film never makes the basic case for its own existence, other than as a showcase for Martin and Godere, and a setting for established talent to hang out together for a few days. It loiters without intent.