The SpongeBob Movie: Sponge Out Of Water squeegees all over the box office 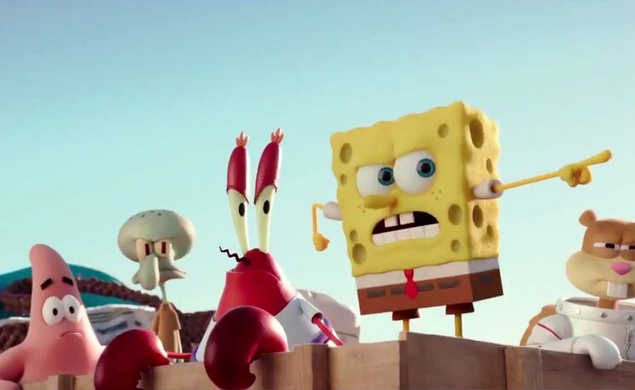 The SpongeBob Movie: Sponge Out Of Water soaked up all of our expectations and cash this weekend, pulling in $56 million. The movie, about a sponge who made a deal with the devil to become a sentient fry-cook, squeegeed all over its predecessor, The SpongeBob SquarePants Movie—which only grossed $32 million in its opening weekend in 2004—but fell just short of The Lego Movie’s $69 million opening weekend last year.

The weekend’s other big opening, Jupiter Ascending, didn’t clean up as thoroughly or as soapily. Originally slated to open in July, the movie’s been roundly crushed by critics, and made only $19 million. The Wachowski siblings’ last two films, Speed Racer and Cloud Atlas, made $18.6 and $9.6 million in their opening weekends, respectively, so in that regard, this gross is a…success? Internationally, the movie fared much better, grossing $32.5 million at just under 10,200 screens in 65 countries. Maybe "I love dogs, I've always loved dogs" is a better pickup line when translated? But considering Jupiter’s $176 million budget, this is a case of descending returns (see what I did there?). Somebody buy the Wachowskis a drink.

Save a seat for Sergei Bodrov at the bar, though—the weekend’s other other big opening, Seventh Son, flopped even harder than Jupiter. The Jeff Bridges/Julianne Moore fantasy epic, made for a whopping $90-$100 million, pulled in only $7.1 million. Also delayed several times, and plagued by rumors of Jeff Bridges and Julianne Moore being actual sorcerers, the movie has managed to make $83.6 million overseas since its international opening in December. Fortunately, Julianne Moore has her Oscar nom for Still Alice, and Jeff Bridges has the great privilege of being Jeff Bridges.

In its fourth week, American Sniper finally dropped to second place, making $24.2 million for a total domestic gross of $282.3 million. Apparently, nobody is a match for Bradley Cooper with big shoulders and a gruff sense of ennui. This makes Sniper the second highest grossing R-rated movie of all time behind The Passion Of The Christ, just passing The Hangover and The Matrix Reloaded. Aiming and firing at The Lego Movie and Captain America: Winter Soldier, Sniper is now the third biggest-grossing film of 2014. Next on Cooper’s kill list, as the movie keeps advancing: The Hunger Games: Mockingjay—Part 1, which grossed $336 million, and Guardians Of The Galaxy, which grossed $333 million.

On the limited release front, Old Fashioned, which has positioned itself as the Christian alternative to Fifty Shades of Grey, made $40,800 in three theaters; Jody Lee Lipes’ ballet doc Ballet 422 opened in two theaters and grossed $26,000; and the rom-com Love Rosie opened in 15 theaters and made $16,200. All in all, a low-key weekend for everybody but SpongeBob. But do you hear that? It’s the sound of millions of people already queueing up to watch Jamie Dornan whip the hell out of Dakota Johnson next weekend. See you next Monday, when this column will turn into a temporary sex dungeon!