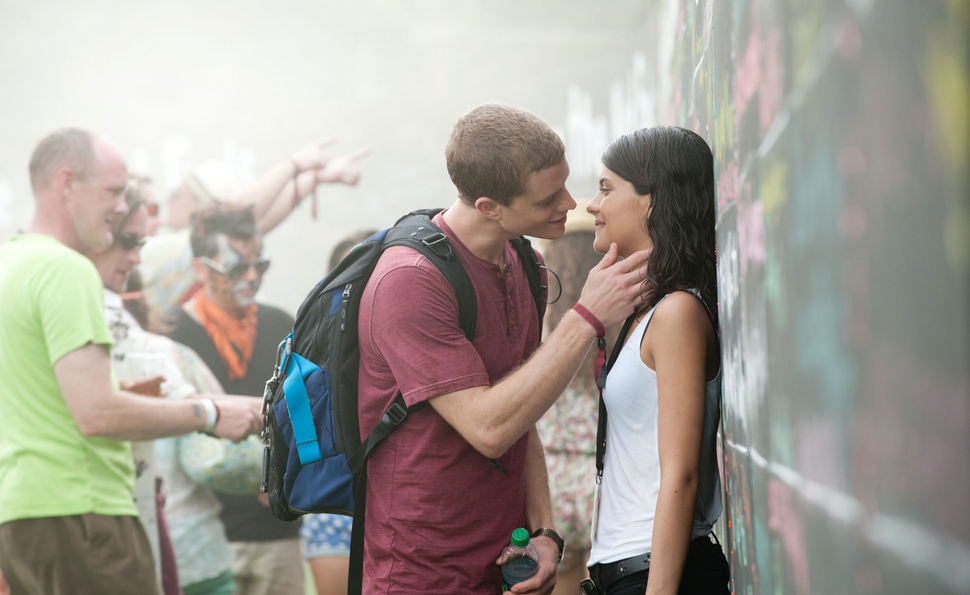 One detail neatly sums up the entirety of Project Almanac, a found-footage time-travel movie from first-time director Dean Israelite. When a group of high-school friends realizes that, however unlikely it might sound, they might soon be traveling through time, they start to fantasize about what to do with their newfound power. One suggests seeing Biggie and Tupac in concert. The kids never get that far. Their machine, powered in part by a Prius battery and an Xbox 360, has some imposing limitations. But they do wind up traveling a few months back to Lollapalooza and enjoying an Imagine Dragons set. It’s not Biggie or Tupac, but hey, it’ll do. (But it’s definitely not Biggie or Tupac.)

Project Almanac even seems to realize it’s not going to be anyone’s favorite time-travel movie. A clip from Bill & Ted’s Excellent Adventure shows up in the background of one scene, and the characters keep dropping references to other, better movies, like Groundhog Day, The Terminator, and Looper. (And, well, Timecop.) But the film does what it can within some pretty serious limitations. A product of Michael Bay’s Platinum Dunes production company, which usually focuses on horror remakes and Purge sequels, Project Almanac tries to make a relatively small budget go a long way, marking a lot of time before it gets to the time-travel business. It at least has a pleasant-enough cast to help with the stalling. Jonny Weston plays David, a budding Reed Richards who, in the opening scene, is getting help from his buddies Quinn (Sam Lerner) and Adam (Allen Evangelista) with a hand-motion-controlled drone designed to secure him a spot at MIT. His sister Christina (Virginia Gardner) films their progress.

Christina does a lot of filming over the course of Project Almanac, and though it’s become a wearisome complaint that found-footage movies require their characters to film in situations in which they have no reason to be filming, it still applies here. There are scenes where the presence of a camera makes no sense, except that the movie requires it to be there. Yet just when Project Almanac seems to be plunging irretrievably into a morass of camera-jostles and poorly framed compositions, the time machine starts working, and the film starts to be fun for a while. Joined by the popular Jessie (Sofia Black-D’Elia), on whom David has developed a considerable crush, the group sets about making their world better, starting by earning David enough money to go to college (and a little for themselves as well) by playing yesterday’s lottery with today’s knowledge of the winning numbers. When that venture works out even better than they planned, more trips follow, including that journey to Lollapalooza. (Imagine Dragons! Whoo!) But when David realizes he’s missed his chance to win Jessie’s love, he takes one trip back in time too many. Then, almost as if someone had stepped on the wrong butterfly while hunting a dinosaur, the present starts to change into a less-pleasant shape.

The science of Project Almanac doesn’t make a lot of sense, and the sparingly deployed special effects (mostly limited to tools spinning in circles as they float above the time machine) don’t do much to cover up that fact. (The stylistically similar Chronicle, for instance, made its effects count when it needed them to.) Neither does the frenetic camerawork, which just keeps moving even in scenes where there’s no reason for everyone to be hurrying about—like a fast-paced raid on a high-school supply area in which no one is chasing the characters, who would probably be more effective if they just quietly snuck around. But there’s heart to the plot between David and Jessie, and even amid all the science-fiction tech-speak, a scene in which he replays the moment he almost kisses her and wishes he could take a second shot at it taps into real feeling. If Project Almanac didn’t bungle it all with a shrug of an ending, it would be easier to recommend. Maybe someone with a time machine should go back and give the movie a do-over.