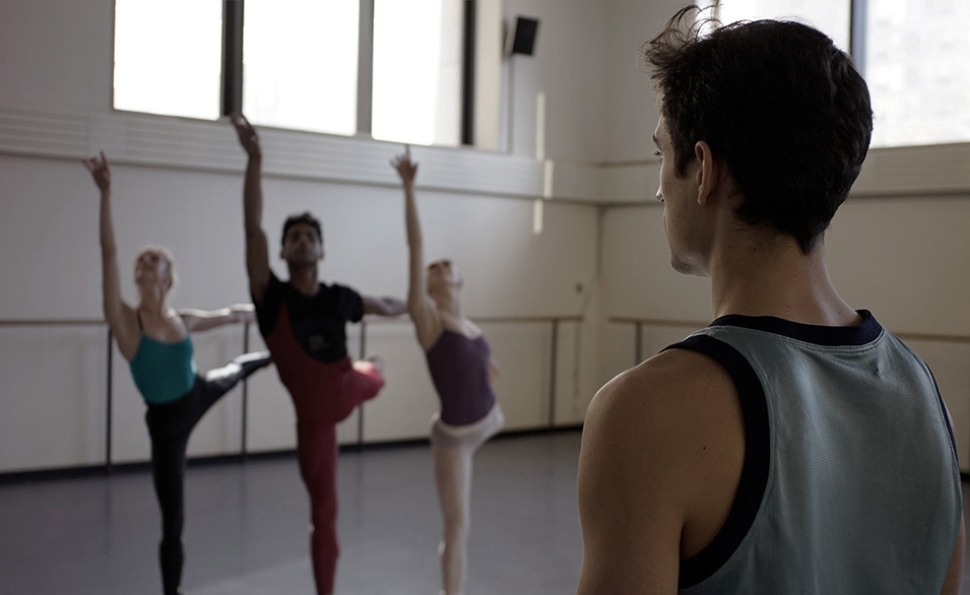 At the end of Jody Lee Lipes’ documentary Ballet 422, young choreographer Justin Peck debuts his latest work with the New York City Ballet, and after the audience at Lincoln Center gives the piece a warm response, Peck hurries backstage and heads upstairs, past crates of costumes and wigs, into a darkened dressing room. There, he removes his formalwear and slips on his dancing shoes. There’s another group performance coming up later in the program, and Peck’s in the corps de ballet.

From its nondescript title to its Frederick Wiseman-like “fly on the wall” approach, Ballet 422 is meant to remove some of the poetic grandeur from the act of artistic creation, and to show it all more as a job of work. When Lipes shot the film, Peck was still a rank-and-file NYCB dancer, getting a chance to choreograph after showing a rare talent during an institutional workshop. Ballet 422 documents the development of the New York City Ballet’s 422nd original piece, and the third that Peck created. (He’s since developed three more.) At one point, one of Peck’s superiors pulls him aside to tell him that what he’s accomplished is remarkable for someone who’s still in his mid-20s, and that he should share his excitement more with the orchestra and the dancers. But Ballet 422 reflects Peck’s stoicism, trying hard not to make too big a deal out of something that’s at once so esoteric and so arduous.

It’s an utterly absorbing documentary regardless. Lipes eschews direct interviews, and includes only a few pieces of on-screen text to explain who Peck is and what he’s doing. For the most part, Ballet 422 leaves it to the audience to figure out what’s going on and how to process it. The film’s dominant image is of Peck’s mostly expressionless face, its brow lightly furrowed, as the choreographer jots down notations and directs the company’s principal dancers. At no point in Ballet 422 does Peck articulate a complete vision, nor does Lipes show a full performance or run-through. Instead, there’s a lot of Peck making minute corrections to a ballerina’s arm-movements and turns, or sometimes even saying things like, “You make the mistake look good. I think I’ll keep it.” In this movie at least, Peck doesn’t come across as confident in what he’s trying to do; if anything, it’s his tentativeness that makes Ballet 422 so subtly dramatic.

Lipes widens the film’s scope to incorporate what the lighting and costume departments are up to, emphasizing the collaborative core of the performing arts. At times, Peck serves as the viewer’s guide through everything that goes into mounting a ballet. He seems as surprised and fascinated as anyone to discover the thought behind how all the different colors blend on stage; and from time to time both crafts-folk and fellow creatives corner Peck and remind him to consider the dancers’ level of comfort during his grueling rehearsals and in the finished performance.

The result is a documentary that’s both impressionistic and informative—admiring the magic of dance even in its formative stages, while also turning the making of art into a kind of procedural. When Lipes reaches the part of the story where the ballet debuts, he cuts away from the stage for a montage of Peck and company practicing. It’s a celebration of all the work that went into the performance, and a reminder that even fits and starts have a kind of beauty.