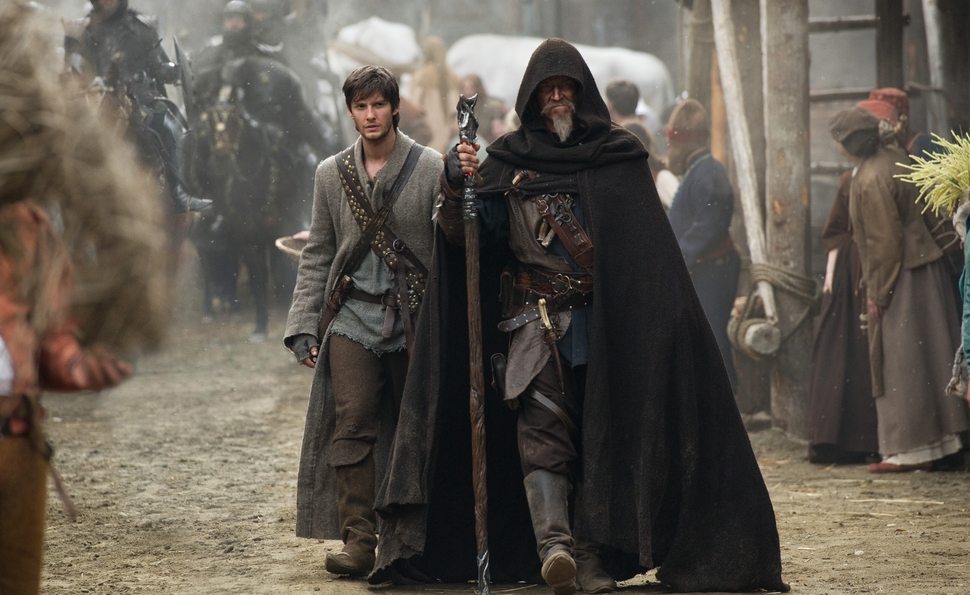 There’s no shortage of stuff in the fantasy adventure Seventh Son: witches that morph into dragon, cheetahs, and humungous grizzly bears; a boozy old witch-hunting “spook” and his Chosen One protégé; grotesque supernatural beasts that emerge from the forest and from the ground; a heavily armored team of assassins; kingdoms under siege; magic amulets and staffs; blood moons; and at least two star-crossed romances. Adapted from Joseph Delaney’s The Wardstone Chronicles, a series at 16 books and counting, the film was presumably intended as a franchise-starter, but it feels more like an entire franchise crammed into one package and hastily sealed with a roll of duct tape. Green-screened within an inch of its life, Seventh Son is a gaudy, tacky monstrosity, an assemblage of fantasy clichés that shamelessly courts both genre diehards and the YA crowd. Perhaps, the thinking goes, they’ll find something to treasure in this sprawling flea market of secondhand trash.

And yet, it moves.

Unlike Dracula Untold, another effects-choked attempt at franchise-building from Universal, Seventh Son doesn’t waste time languishing in moody atmospherics. Directed by Sergey Bodrov, a Russian best known for his tense Oscar-nominated war drama Prisoner Of The Mountains, the film is overstuffed, but it’s swift and unpretentious, barreling through a non-stop series of action setpieces without pausing too long to take a breath. The busyness doesn’t eradicate the clichés, much less enrich the film emotionally or thematically, but there’s no time to think about them when Bodrov and his screenwriters, Charles Leavitt and Steven Knight, are moving along to the next sensation. It’s transporting in that sense, and that sense alone.

Doing his best Toshirô Mifune—which here is an affable cross between The Dude and a goat gnawing on a tin can—Jeff Bridges stars as Gregory, a lone reluctant warrior against the forces of evil. After his latest protégé gets killed in a fight, a new one emerges in a handsome blandling named Tom (Ben Barnes), who lives on a farm but has premonitions of the supernatural. While master and student begin their relationship, Mother Malkin (Julianne Moore), a powerful shape-shifting witch, breaks out of the mountain confinement where Gregory left her, and gathers half-witches and minions to ravage the landscape. This naturally sets up an effects-filled climactic showdown between Gregory and Mother Malkin, and pays off a relationship between Tom and a maybe-good-maybe-evil half-witch Alice (Alicia Vikander), but getting there involves an extensive training period and plenty of mini-adventures.

Bridges is one of the best actors alive, in part because he gambles on roles like Gregory, whom he plays as a mush-mouthed drunk with a twinkle in his eye. He looks awfully silly doing it, too, but there’s a jaunty life to his performance—and to Moore’s witchy imperiousness—that throws the film’s generic qualities into sharp relief. Seventh Son is plagued by the same thinness that dogs the Percy Jackson movies and some of the less-successful YA adaptations, the pervasive sense that a little less was invested in it financially and creatively, like the studio was hedging its bets. Bodrov’s ability to put this junky material through the paces can only cloak its inadequacies for so long—right up to the point where Seventh Son teases a sequel. No thanks.