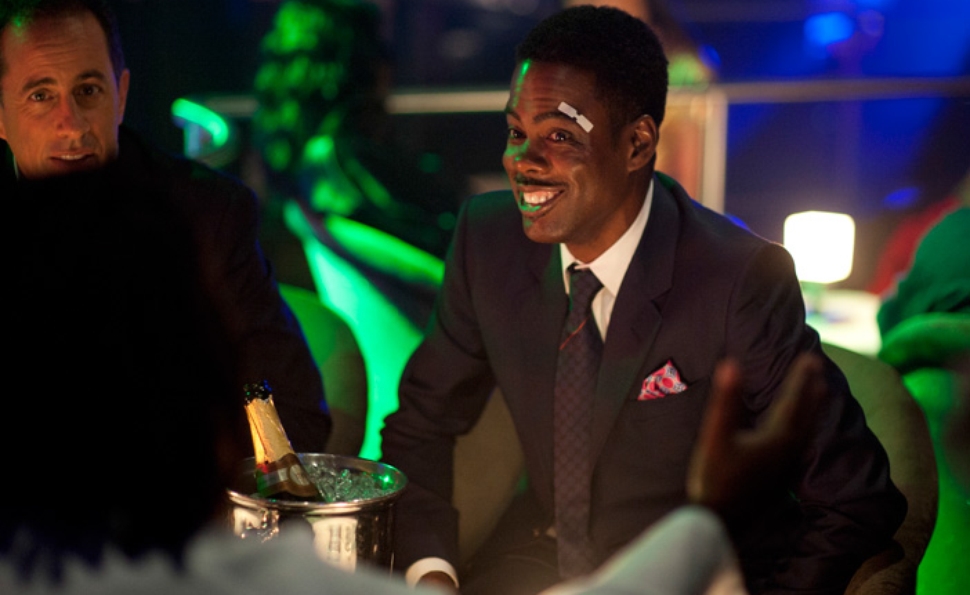 Earlier in the week, after what was a described as an “intense” bidding war, Paramount won the rights to Chris Rock’s Top Five for $15 million, which is a princely sum in the festival world, but a modest, easily recouped investment for a major studio. What the money really supported—or at least confirmed—was a narrative: Chris Rock is back! And for stars of his magnitude, that’s part of the appeal of appearing in (or, in Rock’s case, creating) independent films, which offer the opportunity for image rehabilitation, a confirmation of talent, an unexpected change of pace, or some combination of the three. Along with hunting for next year’s Best Picture winner—of which The Theory Of Everything has emerged as the most likely candidate of a weak lot—the press has rallied around a few stars who have hit the skids in recent years and are looking for a chance to reshape or critical perception.

By his own admission, including a throwaway line or two in Top Five, Chris Rock has suffered from Richard Pryor’s problem of being one of the most revered stand-up of his generation yet having trouble finding a big-screen vehicle for his talent. (It’s telling that Pryor’s only truly great performance, as a disgruntled auto worker in Blue Collar, was not in a comedy.) As a writer-director, Rock stumbled out of the gate with 2003’s Head Of State, a watered-down political satire, but he got more personal with 2007’s I Think I Love My Wife, a reworking of Eric Rohmer’s Chloe In The Afternoon that he and co-writer Louis C.K. mined for marital humor and one absurdly extended Viagra joke. The main problem with Rock as an auteur is that he’s trying to reconcile down-to-earth commentary on himself and his life with his instincts as an entertainer, and it can make for a tonal rollercoaster.

Though it’s his best film to date, Top Five still finds Rock struggling acutely with that problem, since the Recovery concept of “rigorous honesty” is taken as a central theme. Rock stars as a version of himself, and Rosario Dawson co-stars as a New York Times reporter following him for a profile, which allows for natural digressions about the ups and downs of his career and personal life, and the media circus that surrounds him (including an upcoming televised wedding to a reality-show star). The film’s strengths and weaknesses break down pretty cleanly: The scenes in which Rock and Dawson share their thoughts and visit his family are warm, candid, and romantic; the scenes that fly off into a lowbrow 8 1/2 put some distance between Rock’s goal of revealing truths about himself and about show business, and his apparent need to include a sequence where Cedric The Entertainment saturates a hotel bed with ejaculate.

By contrast, Adam Sandler has spent TIFF 2014 attempting to reassert himself as a serious dramatic actor—and has done so by starring in the two worst films I’ve seen at the festival. Neither one is Sandler’s fault, really: He cannot be blamed for believing Jason Reitman and Tom McCarthy—both of whom have fine critical track records overall—could shepherd him back to respectability after his recent string of critical and (mostly) commercial flops. Sandler is only one in a constellation of major stars in Reitman’s Men, Women & Children, and while he’s dull as a suburban dad who looks outside his marriage for sex, it’s not his movie by any means. He does have greater ownership of The Cobbler, since he’s in every scene, but a second dull performance is far down the list of missteps this woeful comedy takes.

Sandler plays a fourth-generation cobbler who lives with his mother and runs a shop in a Lower East Side neighborhood in danger of gentrification. The magical-realist hook has him discovering a century-old stitcher in the basement that will turn him into one of his customers if he slips their shoes on—in other words, he can literally walk a mile in another man’s shoes. There are comic and thematic possibilities with that premise, and the initial (and almost immediate) disappointment with The Cobbler is the recognition it’s not going to realize any of them. McCarthy, who specializes in earnest, actor-driven dramas like The Station Agent and The Visitor, doesn’t appear to have much of a feel for comedy, and Sandler’s sleepwalking does little to help. But it gets so much worse than that. As the plot thickens, the film gets permanently sidetracked by a long and racially dubious subplot involving Method Man as a vicious enforcer and Ellen Barkin as a mob queen who will stop at nothing to seize a piece of real estate. But wait, it gets so much worse than that even! A huge star turns up in an uncredited appearance to usher the film into an ending that would be nonsensical in all but the world of Men In Black. The Cobbler is a paradox: A film that must be seen to be believed, but mustn’t be seen.

Though Julianne Moore doesn’t have to worry about her image or stature in quite the same way as Rock or Sandler, it’s been a while since she’s appeared in a film worthy of her talents. If nothing else, the straightforward Alzheimer’s drama Still Alice affirms her range and vitality, casting her as a celebrated linguistics professor who’s beset by a genetic strain of the disease in her early 50s. Her comfortable life, with a supportive husband (Alec Baldwin) and three adult-age children (Kristen Stewart, Kate Bosworth, and Hunter Parrish), slips from her along with her memory, and her innovative ways of coping don’t slow her deterioration so much as cover it up. The writer-director team of Richard Glatzer and Wash Westmoreland  keep it simple—she gets the diagnosis, loses control of her mind and body, and that’s that—and do well to balance her personal difficulties with the fallout in the rest of the family. But for all its merits, Still Alice prods too much for emotional effect, and so avoids acknowledging this family’s exceptional wealth and privilege that the loss of the good life becomes a prominent part of the tragedy.

No transformation was quite as dramatic, however, as Richard Gere as a homeless man in Oren Moverman’s Time Out Of Mind, and that’s the biggest—and perhaps only—hook the film has going for it. Seeing Gere, the elegant bachelor of The Cotton Club and Pretty Woman, reduced to sleeping on park benches and shuffling through shelter protocols is a different kind of image rehabilitation, one that restores his credibility as a serious actor. But Gere is often overwhelmed by Moverman’s crowded compositions and hyper-aggressive soundscapes, which the director offers in lieu of anything so gauche as drama or incident. In contrast to Heaven Knows What, another sonically dissonant portrait of homeless NYC addicts, Moverman wants mostly to detail the condition of being on the streets rather than giving Gere a motive or the energy to achieve his goals. He does have things he needs to do—like get a new birth certificate to start the process of public aid—and things he wants to do—like win over the daughter (Jena Malone) he abandoned—Moverman keeps kicking them down the road. The result is an impressive and rigorous film about the condition of being one of the city’s unfortunates, but it’s also a tad boring.

Though ideally not seen back-to-back, for fear of abandoning all faith in humanity, two excellent documentaries I saw one after the other attempt to understand the human capacity for mass slaughter—and the denial of same. With documentaries like Kurt & Courtney and Biggie And Tupac, Nick Broomfield has long been the Unfrozen Caveman Lawyer of tabloid-style investigation, taking on a mock-naïve persona as he pokes through the seedier corners of American culture. His interview subjects are usually too marginal to be taken seriously, but with Tales Of The Grim Sleeper, his look into a series of serial murders in South Central Los Angeles that go back 22 years, the revelations come fast and horrific. With Ferguson still in the public conscious, the film serves as shocking reenforcement of official neglect for crimes against African-Americans. Tomorrow, Noel will write at length about The Look Of Silence, Joshua Oppenheimer’s follow-up/companion piece to the extraordinary The Act Of Killing, about the Indonesian genocide of the late ’60s and its ever-present legacy in the country. But I’ll say for now that it’s maybe even more shocking and powerful, with scene after scene of a remarkably brave 43-year-old ophthalmologist who confronts the men responsible for killing his brother, along with thousands of others in the region. Families have been living for decades afterwards knowing exactly who murdered their sons, daughters, husbands, and wives. The Look Of Silence has the courage to talk about the elephant in the room.

There were disappointments aplenty for me in the American-independent realm, most prominently Noah Baumbach’s While We’re Young, which starts as an invigorating and witty comedy about generational divide, but turns into a false disquisition on documentary truth and ethics. As a Hal Hartley fan/apologist—I’ll go to bat for the heavily maligned No Such Thing any day—I’m always hopeful for a comeback, but while it’s great to have the Hartley gang (Thomas Jay Ryan, Martin Donovan, Robert John Burke, James Urbaniak, Parker Posey) together again for Ned Rifle, a second sequel to Henry Fool isn’t the best possible vehicle for a comeback. (Though it’s funnier—and shorter—than Fay Grim, and Aubrey Plaza’s deadpan sexiness fits well into the Hartley-verse.) I walked out of The Keeping Room with only 20 minutes left, but nothing about this Civil War tale of resilient Southern women fighting off a home invasion by Yankee marauders struck me as authentic and its studied grimness and violence pushed me out the door. Happily, the Safdie brothers’ Heaven Knows What confirmed that American indies can still go to vital, radical places; their documentary Lenny Cooke, released earlier this year, treated the rise and fall of an NBA prospect with unusual inflections, and that carries over to their richly textured portrait of homeless addicts.

Among my group of cinephile friends, few films in the festival gathered as much enthusiasm as Phoenix, from Germany’s gifted Christian Petzold (Jerichow, Barbara). Though it’s a beautifully rendered twist on Vertigo, I wasn’t entirely sold on it until the stunning final scene, which seemed to knock everyone for a loop. Pedro Costa enthusiasts were also more impressed than I was with Horse Money, his latest tour through the Fountainhas slums outside Lisbon, Portugal. Costa’s painterly compositions are carried over from Colossal Youth, but they’re airless and lacking in dynamism—this feels like a museum installation, one that aestheticizes poverty.