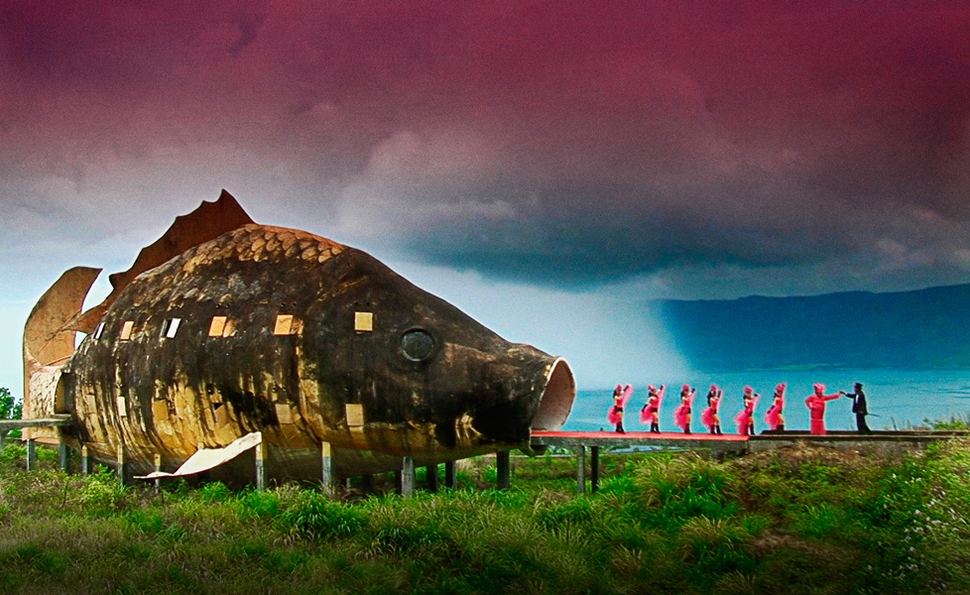 The audacity of Joshua Oppenheimer and Christine Cynn’s documentary The Act Of Killing is evident right from the opening scene, which has colorfully clad dancers and actors emerging from the mouth of a giant fish sculpture to cavort beneath a waterfall, with the sunlight glimmering off their finery. It’s a beautiful, funny tableau, given a layer of meta by the offscreen presence of someone barking orders at the performers, yelling at them to be more natural and happy, and less “fake.” All in all, not a standard way to kick off a movie about genocide.

The Act Of Killing takes a heavily filtered yet still piercing look back at what happened in Indonesia in the mid-1960s, when a Western-backed military coup led to more than half a million citizens being slaughtered by paramilitary organizations staffed by gangsters and teenagers, all working under orders from the new government to “kill communists.” A half-century later, some of those murderers are still in leadership positions, while others are free to enjoy the fruits of their crimes in their old age. Former death-squad leaders aren’t just tolerated, but lionized by some, which is why they have no apparent qualms about telling Oppenheimer exactly what they did and how they did it—all the way up to detailing the best ways to slash and strangle people without making too much of a mess.

One of those ex-executioners is a man named Anwar Congo, a frail old cinephile who tells Oppenheimer how he and his cronies got a lot of their ideas for slaughter and intimidation from Hollywood movies. So Oppenheimer gives Congo and his accomplices the chance to relive their glory years by restaging some of their worst crimes with the help of makeup, special effects, costumes, and a pool of not-always-willing extras drawn from the populace. The gangsters dress up as movie gangsters, and also as cowboys, soldiers, and song-and-dance men, playing a game of let’s-pretend that maybe makes it initially easier for them to keep boasting about their atrocities. What trips Congo up, though, is that his buddies have encouraged the women and children they’ve employed as extras to wail realistically (something the kids in particular have no trouble doing, since they seem genuinely confused and scared), which means that even though everyone’s “acting,” the terror starts to feels real. Gradually, re-enactment by re-enactment, as Congo is confronted with all the weeping and screaming that he never paid much attention to 50 years ago, he loses a lot of his bravado.

The Act Of Killing is too loosely structured at times, as it moves from one re-staging to another, linked by footage of these men going about their fairly prosperous, mundane daily lives. And Oppenheimer relies a little too much on the hacky agit-prop trick of cutting away from interview subjects right after they’ve said something embarrassing or outrageous, which is a cheap way of manipulating the audience into seeing how terrible and/or pathetic these men are. And given that these are guys who openly admit that watching Elvis Presley movies before a job boosted their spirits enough to allow them to kill “happily,” it isn’t really necessary to try and make them look even worse.

Then again, the whole question of what’s an acceptable amount of media fakery is at the heart of The Act Of Killing. The film’s most troubling figure is one of Indonesia’s major newspaper publishers, Ibrahim Sinik, who freely admits that he collaborated with the government to plant lies about the people the military wanted to smear. Sinik, Congo, and the others are full of justifications for what they did, claiming that purging the country of communists (or at least people accused of being communists) was a noble endeavor that required extraordinary cruelty, while citing the story of Cain and Abel and the atrocities of other nations for perspective. Over and over, people in The Act Of Killing mention that the word in their language for “gangster” comes from the English term “free men,” painting themselves as heroic individualists, just like the characters in their favorite movies.

Now that they’re older, though, with kids and grandkids of their own, the death-squad leaders are more understanding of how the children of the people they killed might feel, especially since a lot of the victims weren’t guilty of anything. At first, during the re-enactments, Congo and company express some concerns to Oppenheimer that his film might change the public perception of what they did. But later, Congo’s perception changes, as he realizes that ordinary, law-abiding citizens are afraid even to pretend to be communists around him, lest there be some misunderstanding. The public may hail him as a hero, but they’d be happier if he left them alone.

The Act Of Killing raises all kinds of provocative questions about the sins of nations in transition, and about how important it is for those in power to control the narrative. Without ever using first-person narration, Oppenheimer also ponders how a lifetime of watching consequence-free movie violence gave Congo and his ilk the confidence to behave awfully—and the irony that re-creating their crimes in a movie made them seem more real. Ultimately, The Act Of Killing acknowledges that while Oppenheimer may have subtly tortured their conscience, these thugs are paying no real price. But perhaps it’s the most apt punishment for a film buff to be convicted by cinema.