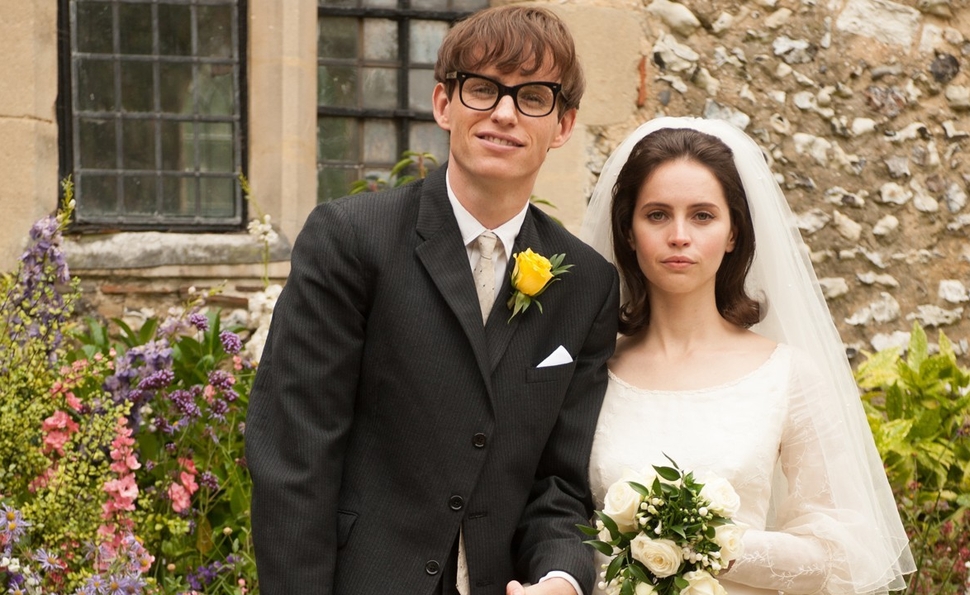 Day 4: Inspired By A True Story

When he was making his innovative Stephen Hawking documentary A Brief History Of Time, director Errol Morris recalls that the only real friction he got from Hawking was over the inclusion of too many biographical details from his life. That could mean any number of things: That Hawking wanted his private life to remain private, that he was uncomfortable with certain aspects of his history, or he wanted his ideas about the science of black holes and the creation of the universe to stand on their own. Morris’ counterargument was that Hawking’s bestseller was already a biography, and his documentary would find meaningful links between Hawking’s condition—confined to a wheelchair due to the neurodegenerative disease ALS, speaking only through his voicebox—and his persistent effort to make sense of the galaxy’s origins and communicate his findings to the masses. In Morris’ A Brief History Of Time, science and biography are elegantly yoked together.

Based on Travelling To Infinity: My Life With Stephen, written by his ex-wife Jane, The Theory Of Everything doesn’t strike the same meaningful balance. It’s a typical middle-of-the-road biopic that couldn’t care less about Hawking’s ideas, which are only vaguely and perfunctorily defined, and used mainly as grist for a facile argument between Hawking (Eddie Redmayne) and his Catholic wife Jane Wilde (Felicity Jones) over whether God exists or not. The true purpose of The Theory Of Everything is to make the audience feel good about themselves, inspired by Hawking’s triumph over a disease that was supposed to kill him in two years and the intrepid woman who stood by him for longer and more difficult times than she might have predicted. Director James Marsh—who owes Morris a steak dinner after applying his style to his documentaries Man On Wire and Project Nim, and now taking Hawking’s story to the red carpet—gets terrific performances from both of his lead actors, but he’s far too timid in drawing out the tensions that develop between Hawking and his wife. It’s a painful fact that his disease serves as the catalyst for their eventual split, but Marsh seems unwilling to dramatize it with any force. He wants his third-act uplift to be as uncomplicated as possible.

My day of fact-based stories continued with Michael Winterbottom’s dreadful The Face Of An Angel, which suffers from a timidness of another kind. Ostensibly a fictional rendering of the Amanda Knox case—specifically the time leading up to her first appeal—the film searches for a fresh angle on the subject and ends up delivering a persuasive argument against its own existence. Daniel Brühl, who lit up the festival last year as a brusque race car driver in Rush, plays a hard-living, coke-snorting movie director who has been persuaded to turn the Knox (here “Jessica Fuller”) ordeal into a fiction film. For this, he gets help from a freelance journalist (Kate Beckinsale) who’s been on the beat from the beginning, but his distaste for the entire tabloid media circus—and the potential for him to be a part of it—starts to affect his thinking on the project. The Face Of An Angel doesn’t comment definitively on the Knox affair one way or the other because it concludes that the truth is unknowable, at least based on the facts we’ve been given. And though it teases out a couple of red herrings, including a local creep who’s so immersed in the case that he’s written a script about it, Brühl’s filmmaker—and the film itself—loses interest and turns to the navel instead. He does, however, have an affair with a barkeep. Those interested in the dalliances between a failed filmmaker and a bartender in the city where Amanda Knox may or may not have murdered her roommate are welcome to it.

In this sad parade of biopics, credit Abel Ferrara for at least having a point of view on Pier Paolo Pasolini, the subject of his brief, impressionistic biopic Pasolini. Credit Ferrara also for avoiding the birth-to-death conventions of the genre and limiting his time with Pasolini to the release of his notorious 1975 provocation Salò, Or The 120 Days Of Sodom and his murder shortly thereafter. But Ferrara’s plain kinship with Pasolini (effectively played by Willem Dafoe, despite the dissimilarities between the two men in look and nationality) manifests itself in a confused, tedious, only fitfully compelling experiment in narrative filmmaking. Ferrara auteurists will likely go for it, but the main problem with Pasolini is that Ferrara himself has been a Ferrara auteurist. The scenes that work in the film, like a conversation Pasolini has with a journalist about his politics and art or the speculative staging of his murder, are the most straightforward in their formal language. But when Ferrara attempts more avant-garde touches or bathes the fallout from Pasolini’s death in operatic montage, the film loses clarity and purpose.

At 338 minutes, Lav Diaz’s Locarno-winner From What Is Before also suffers from a lack of refinement, but its shapelessness is fair trade-off for an immersive and transporting fusion of history and empathy. Shooting in black-and-white—which I’m still not convinced looks filmic on digital video, though the compositions are sharp—Diaz follows the last years of a remote village in the early 1970s before Ferdinand Marcos’ goons set up shop and declare martial law. The amount of suffering before the troops even arrive is immense, mainly due to the government’s inability to provide basic social services, but its interest in the village as a probable site for communist rebels amplifies the suffering all the more. Plotting isn’t Diaz’s strong suit—a fifth-hour twist is especially ridiculous—but it’s not really his primary interest, either. From What Is Before excels at evoking the rituals, struggles, and friendships in a community that’s deeply rooted, but tragically on the verge of extinction. Much like The Missing Picture from last year’s festival, it fully imagines a time and place that has officially disappeared.

Also seen: Mike put it most succinctly in this emoji tweet, but Jason Reitman’s Men, Women & Children is more catastrophically misjudged than even his much-maligned last effort, Labor Day. What surprises me about Reitman is that the good judgment (if not quite inspiration) that guided his first few films (Thank You For Smoking, Juno, Up In The Air, and Young Adult) has abandoned him completely. Nothing about the film works—not the alarmist anti-Internet message, not the texting effects that overwhelm the frame, not the dubious gender politics or on-the-nose use of Hall & Oates’ “She’s Gone” or the freakin’ eating disorder subplot. The other Hollywood movie I saw—pre-festival, though it’s only just today off embargo—was The Equalizer, which re-teams Training Day director Antoine Fuqua with his star, Denzel Washington, for a glum, thoughtless Death Wish-style vigilante thriller that doubles as a stealth superhero movie.

From there, I’ve been globetrotting most of the last two days. Let’s travel from East to West: 10 or 15 years ago, erstwhile French enfant terrible François Ozon (Young & Beautiful, In The House) would have turned the premise for The New Girlfriend—about a man (Romain Duris) who shifts genders after his wife dies and his complicated relationship with the departed’s best friend (Anaïs Demoustier)—into perverse Hitchcockian thriller or a florid gay soap opera. But Ozon tries to play it straight, figuratively speaking, and earnestness doesn’t become him; the film has a warm, progressive spirit on issues of gender fluidity and sexual identity, but it’s tonally off. Also from France, the experimental documentary Letters To Max uses an epistolary format—or a fake-epistolary format, in that the “letters” are more like prompts than correspondences—to explore life in Abkhazia, a tiny, disputed state on the Black Sea. Max is an Abkhazian diplomat who answers the director’s queries, and those responses run over absorbing images of a territory that we never see in movies.

Staying in Europe, Swedish director Roy Andersson ends his mordant three-film statement on humankind with A Pigeon Sat On A Branch Reflecting On Existence, which was kindly received here and at Venice (where it won top prize). But I’ll join Mike in declaring Andersson’s latest a disappointing case of diminishing returns, with some questionable setpieces (particularly one involving slave torture that seems outside of his filmic universe) and a much punier vision than 2000’s Songs From The Second Floor, the magnificent black comedy that started it all. Also from Sweden, Robin Östland’s Force Majeure recalls a less clinical and more funny Michael Haneke in its formally astounding, acutely observed portrait of a happy marriage that’s tested by a revealing split-second decision during an emergency.

Hey look, we’re in Asia! Martin Scorsese “presents” Andrew Lau and Andrew Loo’s Revenge Of The Green Dragons, perhaps to return the favor after turning Lau’s Infernal Affairs into his Oscar-winning The Departed. Lau and Loo borrow right back for this absorbing but cliché-riddled gangster movie about Chinese gangs in Queens who recruit undocumented immigrants from a young age and force them into a violent life. At 66 minutes, Hill Of Freedom, the latest comic sketch from Korea’s Hong Sang-soo, is the perfect antidote to a day spent slogging through dense international cinema—funny, slight, playfully structured, etc. But there’s a part of me that will miss earlier Hong films like Turning Gate and A Virgin Stripped Bare By Her Bachelors, which were more ambitious in scale and shot on beautiful celluloid. I also miss the old Takashi Miike (Audition, Ichi The Killer), because the new one is more given to dull arthouse noodling like the theater-as-life experiment Over Your Dead Body, which resembles the similarly indulgent Big Bang Love: Juvenile A, though a gory third act helps.