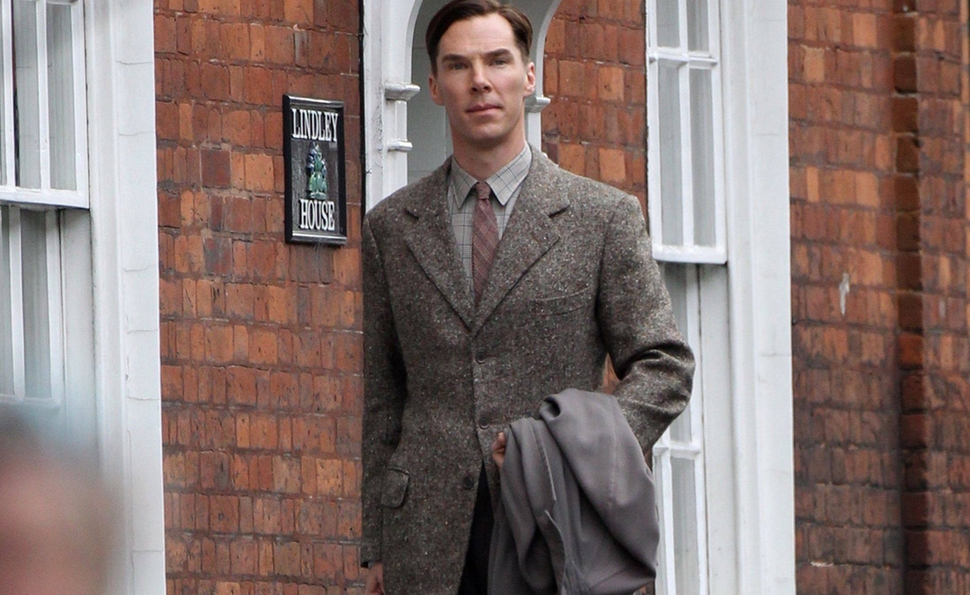 The crowds at TIFF start appreciably thinning out around this time every year, as only the locals and the dangerously obsessive diehards (Note: I do not live in Toronto) stick around for the final weekend. Nonetheless, there were few empty seats at the final press/industry screening for The Imitation Game, in which Benedict Cumberbatch plays Alan Turing, the brilliant mathematician whose work breaking the Nazis’ Enigma code was instrumental in the development of the modern computer. Turing’s tragic personal life—he was gay at a time when homosexual acts were still a criminal offense in Britain, and committed suicide at age 41, following two years of state-mandated hormone treatments meant to cure his “illness”—was the focus of Hugh Whitemore’s acclaimed 1986 play Breaking The Code; a BBC adaptation, starring Derek Jacobi, depicted Turing as a shy and stammering but otherwise fairly normal genius who was unjustly persecuted. While the persecution element remains here, however, Graham Moore’s screenplay and Cumberbatch’s performance re-conceive Turing for the Big Bang Theory age, giving him traits strongly characteristic of Asperger syndrome. The film’s title ostensibly refers to what’s now known as the “Turing test,” designed to determine whether a machine can think, but that subject barely gets mentioned. The real question is whether Turing can imitate “normal” human behavior. His formidable intelligence, the movie argues, means nothing unless the people with whom he works like him.

Cumberbatch does impeccably precise work, as usual; there’s nobody better at the moment for any role that demands a slightly alien quality. Nonetheless, it’s a bit dispiriting to see one of the greatest minds of the 20th century reduced to bringing donuts to work in an awkward attempt to ingratiate himself. Like most historical biopics, The Imitation Game consistently aims for the lowest common prestige denominator, with Moore favoring hackneyed screenwriting devices like having multiple characters repeat some dopey aphorism. (“Sometimes it’s the people nobody expects anything of who do the things nobody expects,” or something like that—you’d think I’d know it verbatim, given how frequently it’s spoken.) Fortunately, Norwegian director Morten Tyldum (Headhunters) applies the same broadly conventional approach to the codebreaking sequences, which are enormously simplified from what actually happened and rousing for precisely that reason. This is the kind of movie in which a chance remark in a bar provides a “eureka!” moment that sends the hero running without explanation to implement his idea, as his colleagues (including Keira Knightley as the team’s sole female) follow in mass confusion. That’s not how problems as immense as Enigma are solved (and Poland probably won’t be thrilled with the way its crucial contributions early in the war are completely ignored), but what seems crass and reductive when applied to a man’s life can be tremendously exciting when applied to his work.

For probing insights into human behavior, one generally needs to seek out less buzz-heavy films. Breathe, the second feature directed by Mélanie Laurent (who played Shoshanna in Inglourious Basterds), premiered at Cannes earlier this year, but didn’t attract much attention in the Critics Week sidebar. Nor have I encountered anyone else who’s seen it here—it just doesn’t seem to be on the critical radar. That’s a shame, as Laurent, who also co-wrote the screenplay, has fashioned something fairly unique: a portrait of an abusive friendship. As the film begins, Charlie (Joséphine Japy) already has a BFF, but the arrival of vivacious troublemaker Sarah (Lou de Laâge) at her high school inspires an immediate changing of the guard. The two are inseparable, though it’s clear that Sarah has severe emotional problems from the moment that she eavesdrops on Charlie’s mom talking on the phone to her estranged husband and then butts in on the conversation. What follows is the standard trajectory of an horribly codependent relationship, in which one party constantly oscillates between affection and contempt and the other becomes addicted to the whiplash effect; what makes it strange and arresting is seeing it play out in a context that’s neither romantic nor familial. Breathe doesn’t demonize Sarah, whose warped psyche is revealed (in a stunning tracking shot) to be at least partly the result of a troubled home life; nor does it throw a pity party for Charlie, who’s selfish enough that she more or less dumps her former best friend the moment Sarah shows up. It’s a genuinely thorny film that builds inexorably to a harrowing conclusion—one that makes the belated appearance of the title card feel like a hammer dropping down.

TIFF’s final days are also a good time for catching up with really long films that would have wreaked havoc on your schedule earlier on. My final dispatch from last year’s festival addressed Frederick Wiseman’s four-hour documentary At Berkeley, and Wiseman is here again this year with National Gallery, running a comparatively modest three hours. As the title suggests, it’s a portrait of London’s famous museum, shot in the director’s familiar, non-expository style; there are shots of paintings, shots of people looking at paintings, shots of docents discussing paintings, shots of experts restoring paintings, etc. For me, that last aspect is the film’s most fascinating—there’s a lengthy explication of Rembrandt’s Portrait Of Frederick Rihel On Horseback, for example, which x-rays reveal was painted over another composition that was horizontal rather than vertical. (Rembrandt apparently just turned the canvas 90° and started over.) Behind-the-scenes discussions about the museum’s marketing strategies are also engrossing, though Wiseman never quite manages to make the intersection of art and commerce a full-blown theme. Less useful are the many docent-dominated scenes, which are often interesting for their own sake (in terms of analysis of a given artwork), but aren’t fundamentally different from videos one can find on the National Gallery’s website. At three hours, the doc is a lot like a visit to an actual museum, rewarding, informative, and exhausting.

Of the remaining movies I saw, only a couple haven’t already been covered by Scott or Noel. As a fan of Mirrormask, I had high hopes for Dave McKean’s Luna; whereas the previous film was roughly five parts stunning fantasy to one part mundane domestic angst, however, his new one reverses that ratio, spending an enervating amount of screen time watching two couples deal with personal and professional rivalries. When McKean leaves reality behind, Luna can be breathtaking—that just doesn’t happen as often as one might prefer. I also took a flier on a low-budget indie called Spring, which appears at first to be yet another horror movie about an American who travels to Europe (Italy, in this case) and finds ancient evil, but in fact winds up going in another, altogether more earnest direction, as Lou Taylor Pucci’s expat finds true love with a highly unusual woman (Nadia Hilker). Both actors are appealing, and the film’s subversion of expectation about shape-shifting female monsters is refreshing. It’s also, sadly, a wee bit dull.

Also seen: Like Noel, I mostly enjoyed Wild, though its many expository flashbacks detract from the present-tense story of Cheryl Strayed’s arduous journey. Like Scott, I was less enamored of Pasolini, which suffers from the usual biopic hazards (though Ferrara does a superb job of imagining scenes from the film Pasolini had been planning at the time of his death), and of The New Girlfriend, which can’t decide whether it wants to be the crowd-pleasing story of a cross-dresser’s empowerment or the (much thornier and more compelling) story of a woman who tries to recreate her dead best friend in the form of the woman’s effeminate widower. Time Out Of Mind left me largely cold, having little to offer apart from the spectacle of Richard Gere as a homeless guy; as Scott noted, it suffers badly in comparison to the much more dynamic and formally arresting Heaven Knows What. And I may prove to be the world’s sole dissenter regarding The Look Of Silence, Joshua Oppenheimer’s wildly acclaimed sequel to The Act Of Killing. I was never convinced that the previous film offered insights into Indonesia’s nightmare that justified providing unrepentant mass murderers with a forum to brag about their crimes; while Look Of Silence is often described as taking the victims’ point of view, it’s really just more of the same, with the garish recreations elided and the brother of one victim serving as a proxy for Oppenheimer. These men have had nearly 50 years to rationalize what they did, and watching them refuse to take responsibility for their actions—even in shots of stony, telling silence—simply doesn’t illuminate anything for me. That’s a decidedly minority opinion, however, and those who loved The Act Of Killing can safely ignore it.

Finally, I went back last night for a second look at The Duke Of Burgundy, and am now confident that it’ll appear near the top of my best-of-the-decade list in five years’ time. Some people seem unable to look beyond the film’s superficially outré elements, but it isn’t really about lesbians, or S&M, or ‘70s softcore erotica. It’s about watching crappy reality TV shows in which you have little or no interest, because the person you love is addicted to them. It’s about going hiking with your boyfriend or girlfriend even though you’d much rather be sitting at home watching crappy reality shows on TV. On the sexual level, it’s about struggling to embody another person’s fantasy, stumbling over dirty talk and hoping you can find the right words to inspire an orgasm. On the most literal level, it’s about the ludicrous amount of water one has to drink if one’s partner is into water sports. The Duke Of Burgundy is the sort of bolt from the blue (I liked Berberian Sound Studio, but not remotely this much) that keeps me coming back to festivals like Toronto’s, seeking that elusive high. This was my 15th trip, and as always, it’s been a pleasure. See you next year.