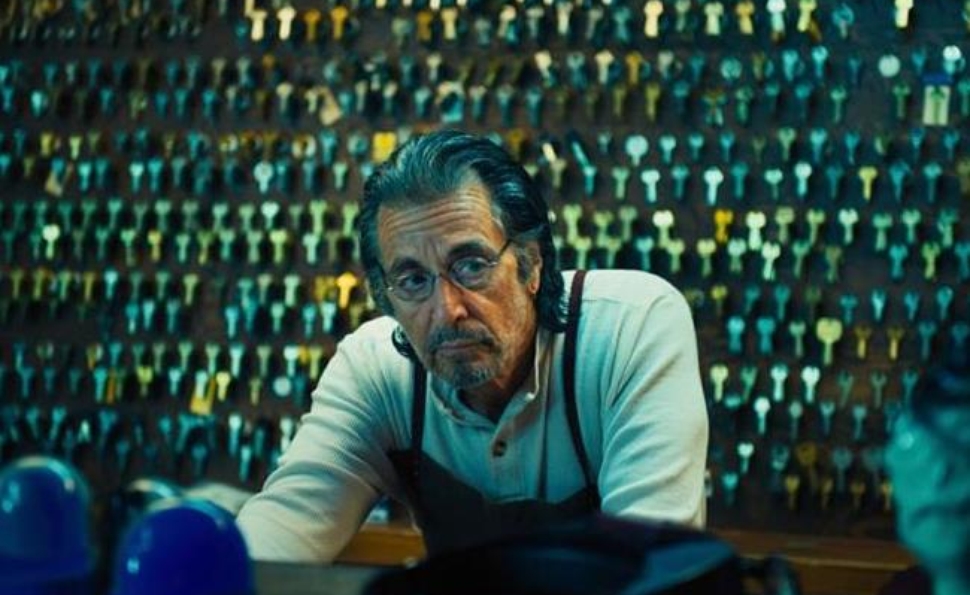 Drawing up a tentative schedule for the Toronto Film Festival is one of my favorite annual rituals. I generally devote most of a day to the task, shifting various films around until I’ve settled upon the 50 or so that I intend to see. Why I bother is a mystery, though—in the 15 years that I’ve attended TIFF, not once have I actually stuck to the prearranged plan for longer than a day or two. Unlike Cannes, at which everyone sees most of the films at the same time, Toronto is a sprawling affair, with multiple press and public screenings for almost every title. Consequently, buzz becomes a major factor, as word-of-mouth (and, more frequently these days, word-of-Twitter) quickly turns unknown quantities into must-sees while relegating highly anticipated pictures to the critical dustbin.

For example: I’d originally pencilled in Manglehorn, because I tend to like David Gordon Green, so long as he’s not working in lowbrow-comedy mode. Word from Venice and from the first screening here, however, was so uniformly toxic that I promptly ditched it, and when a subsequent rejiggering of my schedule freed up another opportunity (at a time when the other available options looked even less appetizing), I went in with extremely low expectations. As a result, rather than expressing my disappointment, I find myself wanting to stick up for Manglehorn a little bit, even though it’s really not very good. In many ways, it serves as a companion piece to Green’s previous film, Joe, with Al Pacino taking over for Nicolas Cage as the A-list star inhabiting the role of an eccentric loner who lives in unromanticized squalor. Pacino’s attention to detail here is formidable—early on, there’s a terrific moment in which he has his glasses perched on his forehead, hears a noise out on the street, and casually wiggles his eyebrows, causing the specs to drop down into place without his having to put down the tools he’s holding. It’s done so casually that one could easily miss it, a far cry from the showboating of which Pacino is frequently (and justifiably) accused. Manglehorn’s tentative courtship of a friendly bank clerk (Holly Hunter) hits the right tender notes, and scenes of the man at work, helping mothers whose kids have locked themselves in cars and so forth, are persuasively low-key. One startling sequence is a slo-mo homage to Godard’s Weekend, of all things. Unfortunately, there’s a lurking backstory about Manglehorn’s obsession with a woman who dumped him decades earlier, which slowly but surely gains prominence until it swamps everything that had been worthwhile about the movie, drowning the characters in cheap pathos. What starts out as an offbeat character study devolves into a facile redemption narrative—a more ruinous variation on Joe’s trajectory, and further proof that Green and cinematographer Tim Orr do their best work when untethered to anything but small-town lethargy and dreaminess.

On the flip side, I heard nothing but ecstasy from folks who caught an early screening of Christian Petzold’s Phoenix, and now feel compelled to suggest, gently but firmly, that they’ve mistaken a great final scene for a great movie. A lot depends, perhaps, upon how one feels about films that closely resemble Vertigo—for me, that’s a comparison to be avoided, as it generally does no favors to the film not directed by Hitchcock. Set immediately after World War II, Phoenix stars Nina Hoss as a woman named Nelly whose face has been obliterated, presumably by shelling; reconstructive surgery makes her look different enough that she’s no longer recognizable, and when she encounters her husband (Ronald Zehrfeld), who believes her dead, he asks her to pose as herself so that he can get his hands on her inheritance. This a pretty high-concept plot for Petzold, who’s more of a slow-burn director (his previous films include Barbara and Jerichow), and much of the film plays like a desultory variation on the scenes in Vertigo that see Scottie dressing Judy up as Madeleine, to her increasing consternation. The husband’s scheme doesn’t make a whole lot of sense, either, since it’s not as if he and this woman he thinks isn’t really Nelly can just split the cash and go their separate ways—her dramatic reappearance will take place before the surviving members of her family, and they’ll ostensibly be married again. Are they going to wait for a while and then divorce? Is he planning to kill her? The movie ignores these questions, as it’s too busy building to a devastating finale—one that’s been carefully set up practically from the opening scene, yet still succeeds in inspiring full-body shivers. Paul Newman once told William Goldman that the last five minutes are the most crucial part of any movie; in this case, at least, he appears to have been right.

Every so often, it’s still possible to walk into a movie completely cold. I’d heard very little about Heaven Knows What—though it had screened at Venice (out of Competition) the previous week—and I’d missed the previous films by brothers Josh and Benny Safdie (Daddy Longlegs, The Pleasure Of Being Robbed). They got my attention right away, however, opening with jittery shots of young smack addicts, accompanied by an aggressively loud, atonal electronic score. Inspired by the real-life experiences of a young woman named Arielle Holmes, who plays a version of herself, Heaven Knows What suggests that not much has changed since the days of The Panic In Needle Park; its characters maintain Facebook pages via library computers, and they have cell phones, but the strung-out cycle of begging and stealing, scoring and fixing, remains very much the same. Holmes, who’s been surrounded by lesser-known professionals (most notably Caleb Landry Jones, playing her sadistic boyfriend), is a natural camera subject, with an instinctive understanding of how to use her expressive eyes. The movie, which spans only a couple of days, amounts to little more than a series of incidents, but each individual scene has a powerful immediacy that makes this sad little world—barely visible amidst the affluence of New York’s Upper West Side—starkly compelling. Like many an unstructured film, Heaven Knows What doesn’t so much conclude as just stop—the opposite effect of Phoenix, sending audiences who’d been captivated for nearly two hours out onto the street with a shrug. But it’s a thrill to be so vigorously shaken up for so long, especially by a movie that arrives with little to no fanfare.

Also seen: Like Noel, I was blown away by The Duke Of Burgundy, which turned out to be nothing like what I’d expected. (For one thing, I’d assumed there would be a duke involved. There is not.) Its genre-pastiche elements, which initially seem merely playful, are gradually revealed to be in service of a remarkably sincere love story—one of the few I’ve seen that looks hard at the difficulties involved in compensating for inevitable incompatibilities. I’m also generally in agreement with Noel when it comes to Nightcrawler, though I’m more bothered than he is by the film’s overblown cynicism vis-à-vis the ethics of local TV news. Jake Gyllenhaal’s ultra-creepy performance, which imagines what would happen if Rushmore’s Max Fischer grew up to be Ace In The Hole’s Chuck Tatum, is the movie’s primary draw. And I was even more disappointed than Noel in While We’re Young, mostly because the last thing I want from a Noah Baumbach movie is a Neil LaBute-style plot twist that reveals what bastards people really are.

Even arthouse films have sequels these days. Hal Hartley’s Henry Fool has now spawned two sequels, in fact, and Ned Rifle (named, amusingly, after the pseudonym Hartley has used for many years as the composer of his films’ scores) concludes the story in a reasonably satisfying way, with a final exchange that knowingly riffs on the ending of the original film. The title character (who’s been played by Liam Aiken since he was seven years old—he’s now 24) is of marginal interest at best, but Thomas Jay Ryan and James Urbaniak are still hilariously deadpan as Henry Fool and Simon Grim, respectively, and Aubrey Plaza fits surprisingly well into the Hartleyverse, rattling off his verbose, deliberately stilted dialogue with aplomb. Much less successful is Johnnie To’s Don’t Go Breaking My Heart 2, which jettisons nearly everything that was distinctive about the original and rehashes the broad, crowd-pleasing bits that were previously mere speed bumps. (Among other problems, one of the first film’s three main characters, played by Daniel Wu, barely appears in this one. Two new characters take his place, but neither makes a worthy adversary for Louis Koo.) And then there’s Horse Money, the latest entry in Pedro Costa’s series of films (In Vanda’s Room, Bones, Colossal Youth) set in the Fontainhas neighborhood of Lisbon. Like Colossal Youth, Horse Money focuses on an elderly Cape Verde immigrant named Ventura, who this time seems to inhabit some sort of dream world that collapses past and present, interior and exterior, truth and fiction. Costa’s Academy-ratio compositions are consistently stunning, but his movies so doggedly avoid cause and effect relationships that I find them nearly impossible to parse. Fans of the other films, however, will surely want to see this new one, as it’s in the same mold.

Neither of the two documentaries I saw over the past few days particularly impressed. Nick Broomfield (Kurt & Courtney, Biggie & Tupac) headed down to Los Angeles to investigate a newly apprehended serial killer; the resulting film, Tales Of The Grim Sleeper, starts off in exoneration mode, then realizes that the accused (whose case still hasn’t gone to trial, though he was arrested four years ago) is probably guilty, metamorphosing into an exposé of LAPD racism. The killer’s various friends and neighbors, extensively interviewed, are excellent company, but digging up evidence that the Los Angeles police of three decades past didn’t much care about African-American women being killed seems like an exercise in duh. At least the film is cinematic, however, which is more than can be said for The 50 Year Argument, a portrait of the New York Review Of Books. If anyone could have figured out how to make a movie about a literary publication visually interesting, it’s Martin Scorsese, one of the film’s two directors (the other is his regular doc editor, David Tedeschi); turns out that nobody could, however, and while NYRB fanatics will find much to enjoy, those not keen on watching writers stand at a lectern reading their work aloud should look elsewhere. Even the lively archival footage, like a scene in which Susan Sontag calls Norman Mailer sexist, comes from other, better movies (in that particular case, from D.A. Pennebaker & Chris Hegedus’ Town Bloody Hall).

The last three movies I watched since my previous dispatch are all opening commercially this week or next, and will soon be reviewed at length, either by myself or by Noel. I’ll merely note for completism’s sake that Pride, a fictionalized account of the alliance formed in 1984–85 between a London gay/lesbian group and striking Welsh miners, made me weepy in spite of my best efforts at resistance; that This Is Where I Leave You sees a fine ensemble cast (Jason Bateman, Tina Fey, Adam Driver, Rose Byrne, Jane Fonda) whiff all attempts at farcical comedy but do okay by the story’s more dramatic interludes; and that Tusk, which Kevin Smith decided to make after his fans voted #walrusyes in response to a ludicrous story idea conceived during a podcast, plays exactly like a movie that was conceived during a podcast and made for a rabid, undiscriminating fan base. It is stupid beyond words.