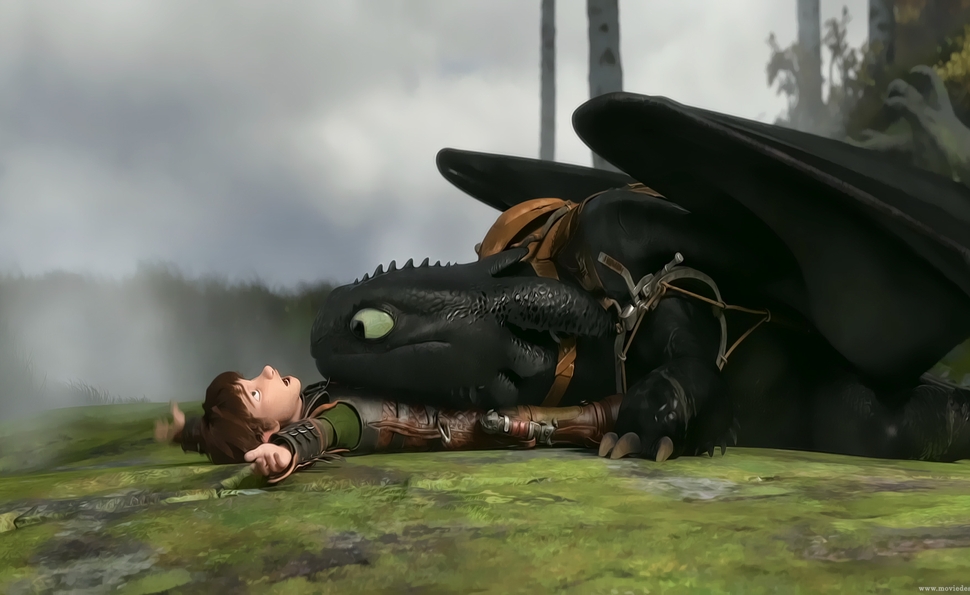 How To Train Your Dragon 2

The most remarkable shot in How To Train Your Dragon 2 doesn’t come from the many stunning sequences of people riding their eager dragon partners, or from the consciously showy battles, or the broad vistas crowded with colorful dragons in flight. It comes near the middle of the movie, when a distracted character accidentally kicks Toothless, the jet-black, catlike dragon who became the major draw of 2010’s $500 million blockbuster How To Train Your Dragon. Toothless flinches right off the screen; while the visual focus remains on the action in the foreground—and even more so on a completely different plane, on the offscreen action that caused the kick in the first place—a piqued Toothless scuttles by in the background, out of focus and barely noticed. It isn’t a major event; it’s a side bit of character business that further complicates what’s already a visually, emotionally, and narratively complicated scene. It is, essentially, a little grace note that helps the moment seem real, because there’s more going on than the camera can take in, or than is directly relevant to the story.

That kind of complication is key to How To Train Your Dragon 2, which is unabashedly more interested in stretching out in its dragon-packed world than it is in pursuing its central hero-vs.-villain plot. Writer-director Dean DeBlois (returning from the first film sans partner Chris Sanders, who instead directed The Croods, and is working on its sequel) rarely puts the film’s multi-planar focus so clearly on the screen as he does in that specific moment. But even when it isn’t part of the visuals—which is no surprise, since it’s easy to overcrowd animated frames to distraction—that sense of a busy, deep world is always present. It’s felt in the film’s tone, which DeBlois consciously designed to emulate The Empire Strikes Back, since Dragon 2 is also the middle film in a trilogy. It’s felt in the overcrowded, celebrity-voiced cast. And it’s felt in the scale, which is jacked up to Pacific Rim levels, both in the epic-sized dragon fights and in the way the story repeatedly takes the characters outside their familiar world and into a larger world community.

Dragon 2 is set five years after the first film. Puny Viking boy Hiccup (still voiced by Jay Baruchel, which unfortunately means Hiccup still has the same wobbly, cracking voice at 20 that he did at 15) has seen his dream come true: Dragons have been seamlessly integrated into his mountainside village, with even his vast, gruff father Stoick (Gerard Butler) and Stoick’s battered blacksmith buddy Gobber (Craig Ferguson) riding their own dragon partners. But while the village focuses on dragon races and dragon bonding, Hiccup and his dragon companion Toothless are more interested in exploring the world, looking for more unknown dragon species. This rapidly leads them to a far-off land where Hiccup reunites with his long-lost mother Valka (Cate Blanchett), fends off desperate dragon hunter Eret (Kit Harington), and learns about a tyrant named Drago (Djimon Hounsou, wearyingly relegated to Only Black Guy In The Movie Is The Villain status), who’s amassing a vast dragon army to conquer the world.

The odd but pleasant thing about Dragon 2 is the degree to which Drago feels like a third-act afterthought, mostly a convenient excuse for climactic battles and some shouted philosophical debates about how humanity and dragon-ity should relate to each other. Drago seems heavily modeled after Mulan villain Shan Yu, in physical design, movement, and menace. (DeBlois, not incidentally, was one of Mulan’s head writers.) But Drago also resembles Shan Yu in the way he spends most of the film as a looming, abstract threat rather than a character. He’s Hiccup’s conceptual evil opposite—right down to a late-film reveal of a crucial detail they have in common—but for all his villain monologuing and considerable power, he’s still more abstract philosophical yang to Hiccup’s yin than he is a fully fleshed-out antagonist.

That same abstraction extends throughout the movie, which replaces the first film’s gut-punching clashes between Hiccup and Stoick—and the equally powerful rapprochement between a friendless young Hiccup and his wild, angry young dragon—with a subtler form of the coming-of-age theme, as Hiccup attempts to determine his adult identity. There’s still some child in him; he idealistically believes Drago can be reasoned with, and he’s frustrated and intolerant when Stoick and Valka each argue otherwise, both from direct experience. Hiccup’s relationship with Stoick hasn’t much changed, and it’s frustrating when Valka follows the same dynamic, leading to one too many overlong, one-note scenes of a frustrated Hiccup chasing his parents around, repeating the same arguments over and over. But Hiccup’s conviction that he doesn’t want to become his father, and doesn’t really know his mother, gives the film its Pixar-esque family drama. To DeBlois’ credit, he doesn’t waste time over any resentment Hiccup could have felt toward Valka, or create and wallow in an abandonment complex; Dragon 2 is about making mature choices, and DeBlois moves in that direction with a sure and steady determination that keeps the film on an narratively even keel. (And speaking of that maturity, DeBlois makes time for a long, sweet, but almost-uncomfortable reunion between Stoick and Valka that feels unreservedly like the onscreen seduction it is. It’s Nala’s do-me look from Lion King, stretched out over multiple scenes of gentle come-ons.)

But the film’s real emotional heart comes from its unabashed fanboy love of dragons. Hiccup’s most important relationship is his bond with Toothless, who continues to alternate between kittenish play, human-ish mimed winsomeness, and deadly ferocity, in a way designed make all the kids in the audience desperately crave their own dragons (and half the adult viewers, too). The sequence of Hiccup and Toothless soaring together remains as alluring as it was in the original teaser trailer a year ago, though it’s unfortunately been re-soundtracked with a fluffier Jonsí composition instead of Audiomachine’s thrilling “Beyond The Clouds.” But Dragon 2’s general affection for the species results in other, similarly drawn-out, fantastically animated sequences, including a mid-air confrontation where the clouds are as much a character as the dragonriders, a heartbreakingly lovely scene where Valka wing-walks between dragons in flight, and a lengthy exploration of Valka’s dragon-filled home. The rote hero/villain face-offs are exciting, but the film is in no hurry to fast-forward to them. DeBlois seems to have a real passion for this world, and like Hiccup, he seems much more interested in soaring through the clouds than in fighting on the ground.

GoWatchIt: Buy. Rent. Stream How To Train Your Dragon 2