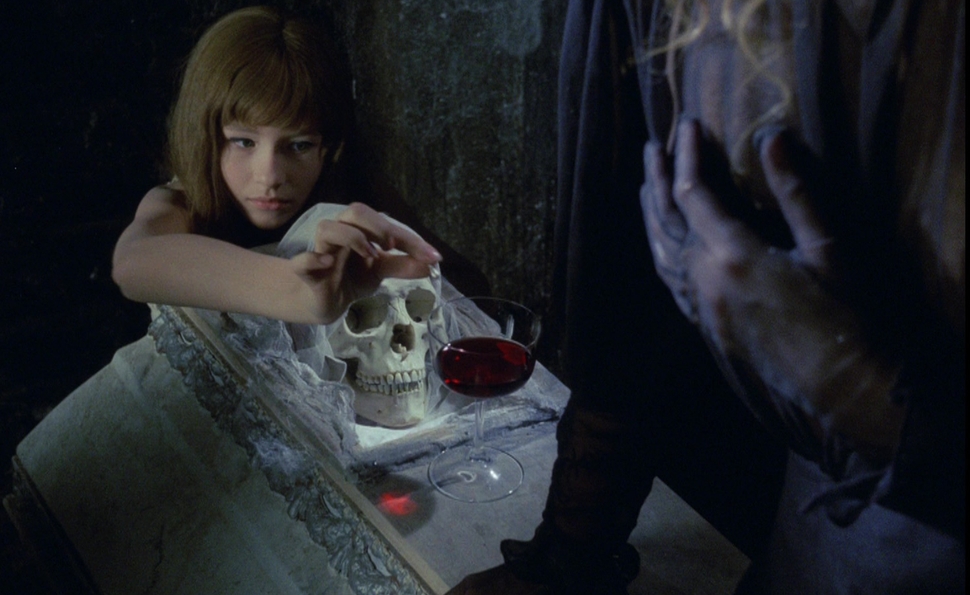 Valerie And Her Week Of Wonders

“I’m asleep, and this is all a dream,” says the title character of Valerie And Her Week Of Wonders, roughly a third of the way through the film. She’s reassuring herself that what she’s witnessing is an illusion, but she’s also drawing attention to something alert viewers of Jaromil Jires’ 1970 Czech New Wave talisman will already have begun to realize: Everything we’re seeing takes place within the subconscious of this 13-year-old girl.

But what’s happening is also strikingly real in its evocation of the emotionally blindsiding onset of adolescence. Whether she’s experiencing it through daydreams, nightmares, or both, the week in question begins as Valerie (Jaroslava Schallerová) reaches menarche—an event announced, in the most indelible image of a film suffused with visual poetry, as a drop of blood splashed across a daisy’s head. (That’s also the image Criterion has chosen for the cover of its beautiful new DVD and Blu-ray restoration.) Set in one of those fairy-tale villages that appear to be equal parts 19th century and medieval, the adventure that flows forth from this moment invokes the darkest tropes of European folklore (vampires, black magic) and history (corrupt clergy, witch burnings) to dramatize Valerie’s initiation into womanhood.

The film’s extraordinarily loose plot (which isn’t much clearer in Vítezslav Nezval’s equally surreal 1935 novel of the same name) is sometimes summarized as Valerie’s quest to find her parents. And that’s certainly part of it. One terrifying candidate for paternity is a white-faced, black-clad, shape-shifting villain known as the Polecat (Jirí Prýmek).

But Valerie also faces a much broader challenge, inextricably tied to her sudden maturity: She must discern whom she can trust, now that everyone wants something from her. Men, particularly the priest Gracián (Jan Klusák), lust after Valerie, then blame her for the shameful feelings her existence provokes in them. Women aren’t always safer; envious of Valerie’s youthful beauty, the grandmother (Helena Anýzová) who is her guardian conspires to steal it. Even Valerie’s visions of a genuinely loving family are fraught with psychological trauma. She’s haunted by the threat of incestuous desire, embodied by both her possible fathers and her only consistent ally, Eaglet (Petr Kopriva), a young man who professes his love to her but may also be her brother.

As she moves through her dream, Valerie seems simultaneously to be growing up—learning to live by her wits—and offering herself as a sacrifice. More resonant than the arc of her transformation, however, are the individual tableaux Jires and production designer/co-screenwriter Ester Krumbachová (a linchpin of Czechoslovak cinema who also co-wrote the screenplay for Vera Chytilová’s 1966 feminist romp Daisies) construct throughout the film. Valerie sprawls in bed, the folds in her white dress matching the creases of her white sheets. The Polecat envelopes her in his black robe and she stares out at the camera, flanked by the bizarre props of a floral fan and a small white dog. A banquet table appears at a clearing in the woods. Valerie, Eaglet, and Valerie’s newly married friend Hedvika (Alena Stojáková) each, at different moments, assume poses of Christian martyrdom. So great is Krumbachová’s attention to visual detail that even the notes Eaglet sends Valerie possess an unusual charm, written in neat capital letters, each word a different color.

Especially in contrast to the elaborate landscape she inhabits, the details of Valerie’s character are sketchy. Beyond her archetypal fairy-tale heroine qualities of courage, cleverness, and beauty—attributes Jires must have been on the lookout for when he cast Schallerová out of a pool of 1,500 candidates—she’s just a normal girl. And this is precisely what makes the film a universal portrayal of female adolescence: Valerie’s subconscious could be any 13-year-old girl’s subconscious. Borrowing iconography from the religious and secular myths she has already absorbed, her gothic visions bubble with anxiety—and curiosity—about sexuality, adulthood, mortality, and the ways in which all of these things might be connected.

These themes, and the potency of the images that surround them, are behind Valerie’s ongoing, outsized influence on artists working in a variety of media. As the Czech and Slovak film scholar Peter Hames notes in a video interview included among this edition’s special features, British author Angela Carter watched it before writing her own skewed fairy tales in the late 1970s. In 2007, a group of neo-folk musicians in Philadelphia were moved to create an alternate soundtrack for the film (also included in Criterion’s release), under the name The Valerie Project. Today, its darkly romantic aesthetic permeates certain corners of teen-girl culture; Valerie GIFs are all over Tumblr, and a series of stills from the film could easily run as a fashion spread on Rookie.

Jires’ dark fantasy was always out of step with the sharper and more political films of the Czech New Wave canon. But in the 45 years since its release, Valerie And Her Week Of Wonders has transcended that context. Now it enjoys a richly deserved place in the international canon of timeless coming-of-age stories.

Because Valerie is unique, both as an example of the Czech New Wave and among Jires’ works, it’s a challenging film to contextualize, and Criterion’s ample but uneven special features reflect that. Critic Jana Prikryl does an admirable job of explaining Valerie’s odd role in the director’s oeuvre and post-Prague Spring politics, as well as the sexually liberated international cinema of the era. A trio of Jires’ early shorts—“Uncle,” “Footprints,” and “The Hall of Lost Footsteps”—highlight his eye for visual poetry, but only “Lost Footsteps,” which unsettlingly juxtaposes the bombing of Hiroshima with lovers at a train station, seems like a true forerunner to Valerie. Though Lubos Fiser’s delicate original score is a classic, The Valerie Project’s alternate soundtrack modernizes the film, and heightens its psychedelic qualities. Criterion’s featurette on The Valerie Project, unfortunately, is a bit dry. And though Schallerová’s and Klusák’s brief reminiscences of the shoot (both recorded in 2006) are entertaining, the interview with Hames is the one that finally illuminates the film itself; his description of Valerie as “a set of resonances” is exactly right.

GoWatchIt: Buy. Rent. Stream Valerie And Her Week Of Wonders